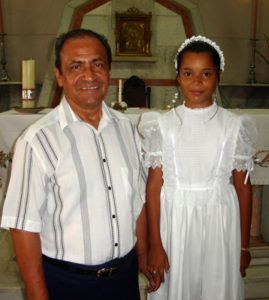 The religious Antonio Dávila Carreón, of the Hospital Order of the Brothers of San Juan de Dios died on May 24 from liver cancer. At the time of his death he was in Mexico, the large homeland to which he always wanted to return, but only for a time: “on vacation”, as he used to say. His other family, that of the good and numerous friends, awaited in Cuba every news or medical part about his health. Amid long chains of prayers, quiet prayers and evocation of memories, we knew that he had left this world. For days he embraced the Cross of Christ and clinging to it delivered his soul. His community in the chapel of San Rafael, in Marianao, a place he had as his piece of Cuban land, fired him on Monday, May 27 with a thanksgiving mass presided over by Father Simon Azpiroz (OH). The intention was unanimous: “to thank God for this man, whose simplicity, humility and consecration to the less enlightened labors deserved the affection of many, the respect of others, the admiration of all”.

He was born in Ocampo, Guanajuato, Mexico, on June 11, 1943. At the age of twenty-two he entered the postulante of the Hospital Order in Zapopan and made his simple profession on the 1st. May 1968. Years later, on June 13, 1974, he solemnly professed. She studied nursing and developed her apostolic work in the houses of Zapopan and Cholula, until in August 1983 she moved to Havana. After twenty-four years without entering hospital brothers on the island, Friar Antonio was part of the first group of religious of the Order who were allowed to join the mission in Cuba, in the two houses that the religious community managed to maintain after the revolutionary triumph of January 1959: the San Juan de Dios Sanatorium for psychiatric patients and the San Rafael Clinic , long converted into a nursing home. Between the two institutions, and between us, he remained for thirty-five years.

Brother Antonio, as we called him, did not want to set an example. He sought no glory, no admiration, let alone recognition. He preferred to live the great but humble faith of those who see in daily work and in the simplest works a path of sanctification. His paradigm was Jesus. Oblivious to the ceremonial, to the taught public, to vanity, he lived to give himself in the midst of silent gestures. Just as a friend and confidant were known, the Lord’s welcome and forgiveness were known in daily prayer and mass. To the insulsive prominence, he put the constant work before it. For thirty-five years, the brother deployed his apostolic task in areas of general services and management in the San Juan de Dios and Hogar San Rafael houses.

At the same time, he cultivated a unique vocation for the promotion of alternative medicine, either with the use of medicinal plants, of which he became a connoisseur, or with the practice of reflexology. On this technique he developed workshops of dissemination and promotion, and enabled a space for the care of residents of the Home, as well as neighbors and people linked to the chapel of San Rafael. Only the complications of a disease that had been in place for a few years and for which he underwent an operation in the fall of 2016, caused him to return to Mexico in March 2018 to receive medical care and be with his family. He never came back. He died far and near Cuba; far and close to Cubans; far and close to those of us who could have him as a friend and discover after his silence and shyness, the good and discreet man who knew how to listen, advise and sustain us in moments of weakness.

Celebrate Mass for the Eternal Rest of Eusebio Leal Spengler

Saints of Today and Always: San Rafael Guízar and Valencia

The parish of San Judas Tadeo and San Nicolás de Bari had several members of the Brotherhood of the Blessed Sacrament and the four branches of Catholic Action. […]

Twenty-eight days after June 2016, he met at the Padre Félix Varela Cultural Center in Havana, the jury of the Palabra Nueva Competition, in its twentieth edition, composed of Father Jorge Luis Pérez Soto, graphic […]