The book of remembrances Do not cry, compiled by Arístides Vega Chapú (and whose reading we recommend) offers a wide sum of testimonies and visions about the so-called Special Period. In the text, several Cuban firms, belonging to various manifestations of culture, tell of their experiences during some of the most raw moments lived in the nineties of the last century. Of the many stories, some extremely hard, we recovered this one, from the writer and poet Aramís Quintero, who was also one of the members of the renowned humorous group La Seña del Humor, of Matanzas.

I suppose special period means a space of time characterized by a material hardship sharper than that of any other moment. And with that definition my indecisions begin, because in my personal memory and perception the years from 1968 to 1972 could well be a special period, which began with the “revolutionary offensive” and ended, for me, with the end of my life as a scholarship and my return to Matanzas to start working.

But putting that aside, for me the Special Period that everyone mentions runs from 1992 to 1999. Why do you need those precise dates? For reasons, again, personal. In 1992 exactly, my difficulties began to do what I normally did until then: work. There was no more transportation and money and lodgings for La Seña del Humor to move. And there was less and less. The group disintegrated. The Cuban currency became the ghost it is, and the dollar took its place, as we know.

So it wasn’t about quitting one job and taking another (professor, culture consultant or radio writer), because in economic terms none made sense. It only made sense to make dollars and La Seña had no access to these, apparently for legal, legal reasons. (But it is the case that sabadazo’s team, the humorous TV show, for example, could win them without any legal problem.)
During the nineties it became clear to me that all the work, the creativity of La Seña, the success, the recognition gained since 1984, were of no use for that work to survive. Nobody cared. No one remembered. I am referring, of course, to the leaders, the institutions […] We would have had to go live in Havana as we could and make the humor for tourists and alcoholics that was done in the nightclubs. We couldn’t do that. We didn’t know.
[…]
Finally, at the end of 1998, the administration of Ruinas de Matasiete, a night center in Matanzas, agreed to pay us a small amount in dollars for working there on Saturdays, sometimes also on Fridays. It was little, but something and systematic. 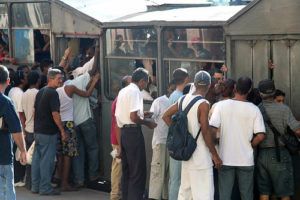 Between November 1998 and February 1999 we made there an audience that did not exist before. A full place. With our usual humor, without concessions to alcohol; without a single altercation or problems of any kind happening. He won the facility and we won. Until, on February 14, 1999, after a special performance with the venue packed and many people who don’t have to watch the show on the outside, inspectors once determined that it was “not legal.” And it’s over.

We don’t even charge that feature. Days later, I called Pelayo , former director of La Seña – to Chile and told him that I was determined to meet him there […] In May 1999 he was flying. That Special Period ended for me and a different one began.

But for me the most serious of this period has a qualitative character, in it appears a new psychological factor, conditioned by the economic situation: insecurity, the perception of “save who can”. That didn’t exist before.

Greater or lesser hardship always existed, but, at its poor levels, everything was assured, starting with the first thing: daily food. With the Special Period began the anguish and stress of “solving” today’s bread, “tomorrow’s, we will see”. We were accustomed to immovable poverty, with its remarkable boredom, but we did not know the stress. Ω

The blows of adversity are very bitter, but they’re never sterile. Renan Ⅰ My dear teacher Rosa Gaínza, who died outside the Fatherland she loved so much, had developed a very particular group therapy technique […]

To the greatest glory of God and the benefit of youth

To the universality of the Church, World Youth Day Panama 2019 will add youthful energy. Thousands of pilgrims from one hundred and sixty nations will arrive in the Isthmaan country, which, in addition to forming […]

Church contributions to education in Cuba

To understand the contributions of the Catholic Church to education in Cuba during the first sixty years of the twentieth century, it is necessary to frame this public service of the Church to Cuban society […]