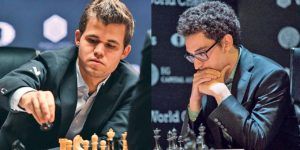 While in the sporting summer the World Cup in Russia and the Central American and Caribbean Games in Barranquilla, Colombia, grab attention, winter will be marked by the duel for the world chess crown between Norwegian genius Magnus Carlsen (current monarch) and American challenger Fabiano Caruana.

The lid, agreed to twelve games, will be played between 9 and 28 November and will be organized by World Chess, a company of clear Russian profile with sponsors friends of President Vladimir Putin, but this time there will be no representative from that country.

Carlsen doesn’t need a presentation. They have long called him The Genie, and I do not think there is a more accurate qualifier for whom chess is the reason for his life, a man for whom his family bet and whose results far exceeded what they could have dreamed of, for today he is the clear dominator in both classical and fast and blitz games.

It is the big favorite of fans, specialists, gamblers and press reporters. However, his rival did not come to the crown discussion for a stroke of luck, but for the sum of a great personal sacrifice, of teamwork and of taking on the world of the trebejos as a source of fun and not so much as a professional job, an aspect that undoubtedly takes away pressure.

The media has been responsible for promoting Caruana as an “American of Italian origin”. He was born in Miami on July 30, 1992, the result of the marriage of an Italian and an Italian-American.

His childhood and adolescence took place in New York, where he learned to play with teacher Bruce Pandolfini, almost out of psychological recommendation, as the same player pointed out at the time to the media: “I was a decent student, but at five he showed some discipline and hyperactivity problems. Someone thought chess might benefit me, so they signed me up for some extracurricular classes.”

By the way, he participated in the Academy sponsored by GM Susan Polgar in the Queens neighborhood, where Robert Fischer also grew up.
At the age of twelve he was already a FIDE teacher and among many tournament titles, he also included two gold medals in pan American youth championships, while astonishing everyone when playing simultaneous sessions. By then “America was small” in chess matters and it was time to “Europeanize” his game, if he wanted to go further.

Europe was not only Italy, it also lived in Madrid, Budapest and Lugano. His game was then advised by masters such as Boris Zlotnik and Alexandr Chernin. And on the floor of the old continent he became one of the best players in the world, able even to overcome the barrier of Elo’s 2,800 points.

However, in world chess there is a political war and although the champion is Magnus Carlsen, Russia and the United States intend to reconquer a crown they held for years, the Russians with their “Soviet generation” of excellence up to Anatoli Karpov and Garri Kasparov and the Americans with Robert Fischer’s game as their flag.

Today chess depends on financial support and Moscow bet everything with Sergey Karjakin on the last world match, but Carlsen won in the finale in the quick games. Now the United States is betting on Caruana and for that he brought it “back home”.

The return occurred in 2015 and much had to do with the bimonthly Rex Sinquefield. Thanks to his support, the American Chess Federation made an offer to Caruana and Caruana did not reject it. A similar operation also nationalized Filipino Wesley So and a year later the United States won the World Olympics in Baku.

Rex Sinquefield, a businessman at last, isn’t just in charge of “putting money” for travel and coaches. Its name also gained relevance with the creation of an exclusive science game club named after it and annually offers a tournament attended by the best players in the world. For the company he was advised by Garri Kasparov, who emigrated from Moscow to New York because his radical political opposition to Putin had put his life in danger.

However, despite its progression and natural quality, Caruana is moved by a major ambition: he has the opportunity to achieve the first individual world crown for the United States since Fischer won the legendary match against Boris Spassky, in Reikjavik, forty-six years ago. Before him, he tried the “nationalized” Gata Kamsky in 1996, but fell to Anatoli Karpov.

Caruana, who achieved the title of Grandmaster at fourteen years, eleven months and twenty days, directly focuses his games, does not go around many and seems comfortable in dynamic positions. Today, many consider him to be the most prepared elite player in the Openings, but he has as a handicap the finals, as he has lost many games in that phase of the game trying to lead the initiative. At these points, it seems better than Carlsen at the start, but lower at the end.

Fabiano is not a universal player, as were Karpov or Kasparov. Clearly, if you analyze your games, you see a preference to go out e4 above d4, so your tendency is to look for open or semi-open gameplay. Statistically, each time you use the Spanish Open you win more than 60% of the games.

Playing with black pieces seems to prefer the Petroff Defense, although he also frequently uses French and Sicilian in its paulsen and Najdorf variants.

Carlsen and Caruana in the last eight years have played 32 classic games and the balance sheet favors the world champion 9 wins by 5 with 18 boards. With white pieces, Carlsen has won 4 and Caruana 2, while with black the balance also favors him 5-3.

Two players with different styles will be measured face-to-face in both chess and personal. Carlsen is the “dream” player, the great, talent by nature, who makes the decisions by intuition, and sometimes arrogant like Fischer or Kasparov. For its part, the challenger is more technical and scientific, and able to move a piece only after calculating the most dissimilar variants.

For this reason, specialists expect a very eye-catching match, perhaps the most attractive of the last ten or fifteen years. If there’s one thing common between the two, it’s that the two are battler players. It’s not easy to see them offering tables; as they see a light along the way, they follow the battle. This will undoubtedly provoke interesting games from both a chess and psychological point of view.

A match for the world’s crown is not a tournament. Many factors affect and preparation is one that is essential. Both will have a team of at least five or six high-level grandmasters who will spend day and night preparing opening variants to gain a competitive advantage.

Already for the Candidates Tournament, Fabiano Caruana experienced a similar experience in terms of preparation. For nearly three weeks he created a training camp in Miami where his head coach Rustam Kasimdzhanov and other great masters such as Cuban Leinier Dominguez, Christian Chirila and Alejandro Ramírez were. The formula could be repeated and perhaps added to another player.

Undoubtedly, the generation of players born between 1990 and 1995 is at the top of world chess. Right now there are seven players born in that period who occupy places in the World Top Ten, while Carlsen (1990) and Caruana (1992) will discuss the orb title.

In betting, Magnus Carlsen is a favorite, but for many Caruana it is the sentimental favorite. After winning the Candidates Tournament, with the simplicity that characterizes him, Caruana spoke of his chances against the Norwegian: “I think it’s around 50-50. If I come well prepared, especially in the Openings, I have a chance. However, I’ll have to be at the same level, which would be my highest level. If I can get it, then I think I have a chance of beating him.”

The sporting summer is marked by the fight at the World Cup and the Central American Games. In the winter there will also be a fight, but the battlefield will be 64 squares. Many things, beyond purely chess, will be at stake. On one side Carlsen “the Great” on the other Caruana “the son who returned home”. The champion is always a favorite, but I recognize that the challenger enjoys a lot of sympathy. We’ll see in the end who raises the Crown. Ω

Interested in improving the communicative aspect within the group and its communities, young Cubans linked to the Association of Catholic Communicators (Signis) met on October 5 and 6 in Havana to participate in the first […]

Over the past Christmas the temples were crowded in Havana and other dioceses, and more families placed Christmas decorations. But the social environment was saturated by situations that tarnished these festivities, officially restored since 1998 […]

Together with Friedrich Durrenmatt and Max Frisch, Kurt Marti (try “Márti”) is one of the great Swiss writers of the second half of the twentieth century. Born in Bern on January 31, 1921, his literary […]