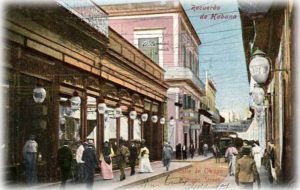 Historians have doubts about the exact origin of the name of this important intramural Havana route. According to Manuel Pérez Beato, he took that name because by 1641 he lived in a residence on that street, a corner later called Compostela, the prelate Friar Jerome de Lara. However, as early as the nineteenth century, José María de la Torre had written that, in fact, he alluded to Bishop Pedro Agustín Morell de Santa Cruz, who resided in a house on the street of the Offices, on the corner of this one. The property still exists today and is occupied in part by the restaurant La Mina and other gastronomic facilities.

By the way, this street sensed the dramatic moment, in November 1762, when the English occupiers of the city forced the elder Morell in an armchair and also deposited him on a furrow ship in the bay, to deport him to Florida, from where he could only return the following year, when the city was returned to the Spanish kingdom.

Towards that street it overlooked the side of the Parish Major, the first temple of the City, which looked towards the Plaza de Armas and occupied the place where the Palace of the Captains General was then erected. And precisely, embedded in a wall in front of that side is a reproduction of the oldest monument on the island: the tombstone reminiscent of Dona María de Cepero y Nieto, a member of one of the main families of the village, who, while praying in the temple, died from an accidental shot of arcabuz in 1557 and was buried in it. When in 1777 the already ruined building was demolished and its functions were transferred to the church left unfinished by the Jesuits in Empedrado and San Ignacio, the monument was moved to the facade of the cepero manor house in Obispo, near Oficios, where today it is replaced by a copy, as the original tombstone is treasured in the City Museum. Ω

Catholic footprint in the streets of Habaneras: Calle Amargura

Catholic footprint in the streets of Habaneras: Calle Jesús Peregrino

Catholic footprint in the streets of Habaneras: Calle Paula

FROM THE BIBLE: Illness, Healing and Miracles I

Catechesis on the Commandments

“God’s love precedes the law and gives it meaning” Dear brothers and sisters: We continue to speak of the commandments which, as we have said, more than commandments are God’s words to his people to […]

Writings about Mary on the Fathers of the Church

I. End of Greek patristics: 8th century The end of patristics in the East can be considered at the end of the 8th century. In this century we have four great Eastern parents who have […]