“I confess that I will never be more happy to write a book, and that my only contrition – since I don’t give a damn about the history of literature – is the work that the colleagues of the printing press must spend with the excesses of Don Severino and mine.”1 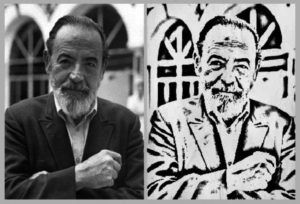 This was written by Elisha Diego in the lapel note of his book Sample of the World or Book of the Wonders of Bolognese, when it came to light in the distant sixties of the last century. Today young people do not know what we talked about when we refer to a “catalogue of types of printing press”, but we, those who were professionals of the book before the digital age was installed or we edited magazines, on a team with the printers, or that we handled our catalogs of the different workshops or printing presses where our works were printed to select families of letters , capitulants, bullets and many other graphic elements used as marks, signs or ornaments. Cuba still did not enjoy electronic printing for its large print runs of books and magazines, so publishers, proofifiers and designers frequentedlinotypists, cashiers and print correctors with well-known names, surnames and faces, whom we rarely had to thank to save our mistakes.

When Elisha Diego found himself in the National Library with the catalogue of printing samples of a 19th-century printer, a bibliographic jewel containing illustrations of all types that assured the customer of the variety and iconic luxury available to his establishment, he suffered a poetic commotion, especially since “Virtue was not in the figures , whose value was sometimes not far away, but in the design they drew together until a single conundrum was closed.”2 The poet had been found with a chain of allusions and riddles that only he saw in that town hall of strange crowds. Such contents took an order for Elisha, the order of mystery that lies in every thing, and began to translate into a dark game that explains but rather lists, surprises, describes and reveals shadows, beauties, traces of meaning, forebodings of significance and transcendence. And so the departure is raised:

Shipping
Uncertain god of dreaming
tell me if the Craftsman is pleased
groping fold his illustrations
we don’t know what – or who does them.3

So what follows is the reproduction of many images of the sampler, and at the foot a double verbal that the poet dedicates to him. But that other poetic is description, recreation and interpretation of the sampler as a whole, a very deep dialogue between visual language and written language, which is called in rhetorical terms an ecpheric poem,4 of unsinkable depth. It is an artistic representation of another artistic representation, but not individually because the author orders them, as organizing a game, a strange game whose cards are the icons described in themselves, but interpreted in ensembles whose poetic reading translates all the worldview and existential drama of the poet.

The entire poem is profusely illustrated with vignettes, whiskers, images, luxurious chapters, titles in portadillas, subtitles and titles that organize the images described in significant groups, such as: “The sampler begins, as is proper, with the four seasons” (portadilla),5 “The four seasons of the year”, title of a set of four sonnets.6

It’s not a delicate spring
who bullies in the garden making flowers,
black clay and colorful spots
and of all true substance.
She’s not a fragile paint girl.
who i turns on the earth a thousand loves
and with nothing embroider the cousins
where you look at austere creation.

She is the perfect young woman, strong and pure
that we’re eternally chasing
by the immemorial remoteness.
Mother of all light, sweet adventure
of those who eternally dawn
come through the chasms of the days.7

As he describes, he interprets, elevating with his sonnet the naive image of spring to the universal proposal of a dreaming showing the perfection of light, beauty and youth of dawns that are born for each or individual for each and arrive on those “abysses of days”, where time bursts, threatening. The entire book is then displayed in sections worked with editorial cousin, such as , “Samples follow, one of each class”,8 “Here begin the twelve signs of the Zodiac”9 or “Unique and curious chess book”10 and “I call mrs. death”,11 and so on, the groupings develop meditation, linking riddles, mysteries, arcane… Time and death, as in all Elisha Diego’s poetry, govern discourse.

This existential tremolation of biblical root looms in every question, in every uncertainty and in every humble glimpse of hope, all in its game with Don Severino’s bewitched book, it is about “being and not being”, the memory of loss and its lament, the fragile balance of life. And in his game can the poet jump over the centuries and organize a rare game of chess with illustrations as pieces that move between light and shadow to commemorate the feeling of the loss of the loved one, or perhaps of childhood or the years that are left behind and for this he will cover , for example, no less than on a quote from the world’s oldest epic poem, Gilgamesh, a lament for the death of Enkidu, the endearing friend of the warrior hero. They are the leaps of this powerful poetry, whose dense associative chains ascend from the illustration of an engraving taco to the human universality of the feeling of mourning:

Enkidu, my brother, you who were
fast as life, you had
early laughter between cold afternoons
and an axe that was never sad;
you who saw, my brother, what you saw
there in the incredible remoteness
that were our bread of your days
in the same sun that now assists us;
why you’re mute, motionless, so snrumpy
as if you were the atrocious warrior
that in one stroke deprives us of yourself.
You don’t see that at the end of all this time and damage
I’m still in the darkness of the burn first,
I am your contemporary in the abyss.12

Like all poetry, the petals of meaning are opened infinitely, for us and for all who will come, from that dialogue between visual images and verbal images, but there is a rare level of significance given by the editorial elements themselves that collaborate in the poetic density of this Cuban bibliographic jewel that is the poem of the twentieth century , as is the decimononic catalogue in which it is inspired.

When researching the book as an artistic object in itself, we see that only that of the cover designer appears on the credits page: Raúl Martínez, the painter and designer who worked so hard in Cuban publishers, but comes to our aid the print machon on the final page, also adorned with an illustration, which informs us surprisingly that it is the second book edited by the Cuban Letters Collection – years later the editorial of the same name would be created , here it is the dawn of the ICL–, and that the interior pages were designed by the author himself and by the poet and painter Fayad Jamís. There it is, showing that Creole finesse that Lezama was talking about, that the linotypists who “worked with care” were Francisco González and Eduardo González, as well as the boxmen José Ramón Marseille and Carlos Rosas, of the Production Unit 08 Mario Reguera Gómez of the Cuban Institute of Books and who printed 5,000 copies.

All of the above continues to intertwine the book with poetry and painting, in a wonderful interartistic conjunction, in this tribute that includes the Cuban Institute of Books and its already long history. And it comes to mind, one afternoon in 1988, in the then cozy circulating basement apartment of the National Library, where we organized a tribute to the twenty years of the publication of this work with the presence of Elisha, followed by another that was held in the same workshop 08, where two of the operators accredited in the book were present , happy to meet the poet they had worked with. That day we toasted Don Severino’s memory. The game continues through time for those of us who love the printing press and its mysterious avatars.

There is also a conjunction of times. The legitimate date for the bibliographer is that of the cover, which is the face of the book, where it is read: Cuban Book Institute, 1968, that of the moment the print of the book is finished, which is contained in the machon: “… it was finished printing on December 22, 1967” and the one that the poet offers us in his “Introduction” with these words with which I want to close this tiny and moved homage to the fifty years of the publication of the World Swatcher or book of the Wonders of Bolognese:

“All of which he writes and signs, as a tribute in this prince printer to all the heroic and magnificent Master printers of this island, and as a testimony of having honestly accepted and fulfilled all the Principles and Rules, in the city of Havana, six days after the month of March of a thousand nine hundred and sixty-six years, the undersigned , confident and grateful, Elisha Diego.”13 Ω

The Quiet Islands: Topics of Insularity in Elisha Diego’s Poetry

From the book and its prices, from the authors and utopias in the pandemic from various personal experiences

Maria Zambrano and the disease of envy

“The sadness of the good of others, and more of the good of a brother, it’s the sin that God rebukes mainly.” St. Augustine The City of God, XV, 7, 1. More than four decades […]

A Tornado of Faith

The group of young people from the parish La Asunción in Guanabacoa, together with the Sisters of the Society of the Heart of Jesus, assist in the recovery in affected areas after the passage of the tornado. […]

Towards the Constitution it will be, from the citizenship we are

Cuba talks about a new Constitution, I resist saying debate, because the depth of the verb seems not to be in agreement with the functioning of a nation whose strength has not been the culture […]