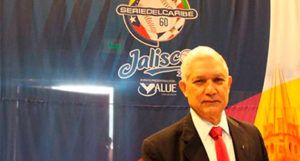 The Cibaeñas Eagles are not one more team of the Dominican Professional League. In his heart comes all the feeling of the Cibao region, whose capital is Santiago de los Caballeros and where many claim that on the seventh day, after doing all things and before resting “God dropped drops of his sweat” to bless a land that is enjoyed by being one of the most fertile in the Universe.

I’m not going to go into historical details. With a little luck you can get them on Wikipedia or another similar page, I want to tell you today about my “aguilucha” experience.

It was Sunday, November 19 last year and on a stop among many pastoral responsibilities, Cesarina and Pinky, servants of Christ Alive in the House of Emmaus, put me in touch with Welcome Tuto Tavarez, well-known sports chronicler of Santiago de los Caballeros, who gently invited me to go to the Cibao Stadium, which they call the Valley of Death (because every rival who arrives there almost always defeated).

And it wasn’t just going to the stadium, it was also watching Licey’s Eagles-Tiger duel. Those are major words, it is the culmination of dominican baseball rivalry, it is Yankees-Boston in the United States, Real Madrid-Barcelona of Spanish football, Boca-River in Argentina or what was once Industriales-Santiago de Cuba in our ball.

We arrived first that Tuto, almost three hours before the start of the match, was still raining, but there were the fans, the vendors of flags, caps and all series of souvenirs, the ticket resellers, etc… and Tuto came.

Contrary to what I had imagined, we would not enter through the front door, but did so directly through the Eagles Club House, the dressing room area. I did not believe it and thought of Rafael Santacruz the charismatic Delegate of the Habana and Mayabeque teams, without a doubt the greatest amateur of that team in our country… and by far.

There, a layman preached the Word of God to the peloteros, including Cuban pitchers Roennis Elijah, Francisley Bueno and Yuniesky Maya. After the hug that more than the friend was to that piece of land that saw him born, the last one said: “I feel very good here in the Eagles, this is a great organization and I want to thank the general manager Manny Acta for trusting me and giving me the opportunity to return, since I am recovering from an injury. I love coming here because it’s played a lot like we do back there in Cuba.”

Maya, who had a brief foray into major league baseball, left Cuba nine years ago and along the way her horizon has been marked by daily work. “Everyone in Cuba knows my story and I am satisfied with what I have achieved. Thank goodness. I have had highs and lows, but we Cubans are fighters and we still are in the country that we are and go out to defend the shirt that we wear, to give the greatest efforts, but never forget our roots”.

After the photo of rigor and wishing for the best for his work that afternoon, I wanted to fill my sights with everything around me. The resting place was marked by photos of the best players in the history of the club and before me was even, body present, Mendy López, the largest home run in the franchise.

Without realizing it, we were already on the grass of the stadium and shortly before the start of the game Manny Acta, who also led the Dominican Republic in the first World Classic, had words of praise for our baseball. “I, in particular, love the Cuban player because he is very competitive, he does so since he starts in tournaments in his country in order to reach the national team and here we have had a lot of luck with them. They’re delivered, very hard-working, I think the Winter League is very appropriate for them. Cuban fans should be very proud of their players, those over there, those who play here, and the many who excel in major leagues as well.”

Manny, with a great career as an athlete and leader, is proud to belong to the Eagles. “This team is very important in the history of Dominican baseball. We have an incredible fanatic, being a team that has won twenty titles puts it in a privileged place. Its history is marked by the warrior spirit and that does it if not the most, one of the most competitive, year after year. Right now we are focused on winning again a crown that has been holding us back for a few seasons.”

A short time later, the game started and we were in a good place in the stands, but there was more to come. A few minutes later, Tuto’s sign guaranteed me that I could talk to Winston (Chilote) Yenas Dávila, the current president of the Club. Outside of all protocol and in a conversation of more than ten minutes marked in the background by the fan algarabía, depending on the intensity of the match, the seventy-two-year-old man said, “I have Cuban blood on my mother’s side and I remember many of the stories he told me, so I have Cuba very close.”

Chilote played in major leagues between 1968 and 1975 and stood out for being a very effective changer with Texas and even more than once emerged from the great Nolan Ryan. “Yes, many times, I even witnessed two of his hit no run games. That was a wonderful experience, albeit without the informational coverage that is there today nor the money that is paid now. I would have liked to live this time” (and smiles).

From different responsibilities Chilote Yenas has enjoyed 19 of the previous 20 crowns of the Cibaeñas Eagles and makes clear the influence of Cuban baseball. “That influence is marked even by the presence of the great Martin Dihigo, and for you to have an idea, the first championship won by our team was in 1951 and the manager was the Cuban Rodolfo Fernández. I think we have a great connection and that’s why the doors have always been open for Cuban platoons, now we have Maya, Elijah and Francisley and we are very grateful to them.”

Pinky (who hadn’t been to the stadium for a long time) and I finished watching the game from the box intended for the chroniclers. Time passed between anecdotes and exchange of experiences, while fans enjoyed a real show, which included not only the triumph of theirs on the ground, but also everything that happened in the stands and that hopefully one day we can enjoy it in Cuba.

Thus concluded my stay in the Cibao Stadium, death valley, the large compound through which the best players of the Dominican Republic have passed.

Days later and back, I learned that the Eagles had qualified for the second round. They were later crowned for the twenty-first time in the Dominican League (LIDOM), so it was the country’s representative team in the Jalisco Caribbean Series, Guadalajara.

There, reinforced with another Cuba pitcher on his payroll, marieleño Raúl Valdés, they reached second place, after eliminating the Cuba team called Alazanes de Granma and giving in in the final to the Boricua monarchs Criollos de Caguas, who matched the feat of winning the Caribbean Series twice in a row.

The Cibaeñas Eagles, despite not winning, returned the joy to the fans when they reached the discussion of the title, after together with novenas such as Giants of Cibao, Tigers of Licey and Lions of the Chosen suffered eleven consecutive defeats between 2015 and 2017.

After the Caribbean Series, Las Aguilas returned to Santiago de los Caballeros and were greeted by a delusional and grateful appreciation, for many the best in the Dominican Republic. Ω

Randy Arozarena, a Cuban on top of baseball

From April 11th to 14th, the National Elective Chapter of the Seglar Franciscan Order in Cuba was held at the Casa de Convivencias “María Mazarello” of the Salesian Sisters in Peñalver. With the representatives of […]

Together with the youth, let us bring the gospel to all Dear young people, I wish to reflect with you on the mission that Jesus has entrusted to us. Addressing you, I also do so […]

After a life dedicated to the service of God, the Church and the Cuban people, Cardinal Jaime Ortega met with the Father. The dossier works are intended to reflect this in its many facets. […]