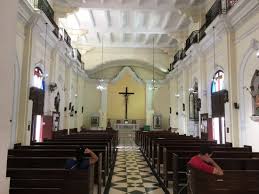 It was the year 1662 when the husbands Don Gaspar Arteaga-Cristalino y Ureña and Ms. Magdalena de Corbera y Espinosa decided to build, in the Havana area of the time, that would later become known as “of outside walls”, a simple hermitage consecrated to Our Lady of Monserrate. In 1746 his grandson obtained from King Charles III the mercy of being declared, he and his descendants, perpetual patron of the aforementioned hermitage on the condition of moving it to a better place and with a building of superior quality, objective achieved by his granddaughter and third patron Barbara Inés Rodríguez de Ortega y Sigler de Espinosa. Consequently, a hermitage was built in 1775, stone and larger, on a land owned by the family that was located within the wall, next to the first Monserrate Gate, in what is now the Plazuela de Albear, between the present streets of Obispo, Bernaza, O’Reilly and Monserrate.

In the 1830s, Havana, still surrounded by the belt of the Wall, had more than one hundred thousand inhabitants, with a growing movement towards the outside walls. In those years, the Wall had three exits to the new developments: the Arsenal Gate, the Earth Gate – on Muralla Street – and the aforementioned first Monserrate Gate.

Thus, Don Miguel Tacón, governor and captain general of the island since 1834, who went down in our history, among other attributes, as an effective driver of excellent public works, but also, because of his experience as ruler in South America, tenacious antagonist of the Haban aristocracy, decided in 1836 to open a second Monserrate Gate, adjacent to that which already existed , towards O’Reilly Street. To this end, he alleged traffic jams and other serious traffic problems that occurred at the only existing door in the place. But, in order to achieve his purpose, the Governor intended to demolish the Hermitage of Monserrate, which he described as very deteriorated, so he considered that its demolition was essential for the road operation of the new door. That is, demolition was a matter of public utility. And there Troy was assembled with the fourth perpetual patron saint of the aforementioned hermitage, Dona Melchora Yánez y Gallegos, niece-granddaughter of Dona Barbara and her heiress. By all means at her disposal and asserting her rights as Board of Trustees, Ms. Melchora questioned the need to demolish and flatly refused to carry out it.

In view of the landlady’s forums, the Governor offered to dedicate to Our Lady of Monserrate a new church that would be built in the suburb of San Lázaro. In this way, the spiritual needs of the population of the area would be met, since all the heritage rights of Dona Melchora, as well as the cultural attributes of the Hermitage, were transferred to that church. But the lady did not accept and reiterated her refusal formally at various times. Finally, Tacón, making use of his faculties, ordered the demolition of the Hermitage on February 13, 1838. The reaction of the landlady was not made to wait and sent a very strong complaint to which at that time was Queen Governor of Spain Ms. María Cristina de Borbón.

On April 16 of the same year Tacón concluded his command in Cuba and left in his place Don Joaquín de Ezpeleta. The former governor was submitted to the Residence Trial, the holding of which was mandatory for senior overseas royal officials who ceased his term of office. In this case it was carried out by the Territorial Hearing of Port-au-Prince (now Camaguey). Mrs Melchora’s complaint, along with six others made by Havana City Council and other neighbors, were part of the file of that trial, from which Tacón was finally acquitted of charges.
With regard to the Hermitage, the Court’s ruling approved Tacón’s action and confirmed the Government’s obligation to build a new one as soon as possible; it also confirmed the patronage rights of Dona Melchora, forcing her, however, to pay costs.

For the construction of the new temple two plots were purchased, in June and July 1840, respectively, those that together formed the land framed by the streets of Galiano, Concordia, San Nicolás and the Alley of the Third Count of Cañongo, in which finally the rectangular church that we know today was built. The new construction proved simple, with stone walls and a wooden ceiling that already lost, as you will see later, with a three-story bell tower and a small term window at the front that still exists. Work began on 17 January 1841 and concluded on 5 December 1843, at a cost of 31,525 pesos. The new church was inaugurated, with a status of hermitage and under the advocation of Our Lady of Monserrate, as its demolished predecessor, on the morning of December 25 of that year. To it were transferred the images and sacred vessels of the old hermitage, which were preserved in the Convent of Santa Clara. It closed so, definitely, what for some time was a dispute. On 30 September 1852 the hermitage was elevated to the status of parish of term.

By royal certificate of October 10, 1862, the Primitiva, Royal and Very Illustrious Archfraterny of Mary Most Holy of the Homeless was created in the parish. This lay grouping, of a devotional and charitable nature, shone strongly for many years. Today it is a memory of what remains, as a constancy, a beautiful marble altar in which the image of the Virgin of that advocation and a pantheon in the necropolis of Columbus is venerated.

The parish of Monserrate was a fashionable church during the last years of the nineteenth and early twentieth centuries. Among many other events that occurred there, it is worth highlighting:

In May 1929, the wooden roof collapsed and a general repair of the temple was under way and concluded on November 24, 1934. Another tough test occurred on September 20, 1936, by the explosion of a car bomb directed against the newspaper El País, which was headquartered in front of the church, on Concordia Street, where there is now a car park. The poorly placed car caused considerable damage to the temple.

On January 2, 1935, the free Parish College, run by the Daughters of Charity, was founded. Located in a house at 68 Manrique Street, it guaranteed excellent primary education, both academically, morally and religiously, to hundreds of children in the area. It remained in use until the abolition of private schools in 1961.

During his early priestly years, during his early priestly years, priests Evelio Díaz Cía, who was bishop of Pinar del Río and then Archbishop of Havana, and Fernando Prego Casal, who was Bishop of Cienfuegos-Santa Clara and, finally, when the division of the diocese, Bishop of Santa Clara, took place. For several years and already emeritus, it was his parish priest Msgr. Fernando Azcárate Freyre de Andrade, SJ, who was auxiliary bishop of Havana. All of them have already passed away.

By paradoxes of Providence, with the coming of time, the disputed hermitage, converted into a parish, was finally nestled in one of the most central places in Havana. At the moment its building, next to that of the parish of San Judas and San Nicolás (built around 1778) and that of the Basilica Minor of Our Lady of Charity (rebuilt in its current configuration between 1814 and 1839), are the oldest in the municipality of Centro Habana. In its nearly 175 years of existence, the community of Our Lady of Monserrate has rendered an invaluable and continuous, charitable and evangelizing service to the ward, the city and the Habanera Church. With its sober and stone simplicity and high bell tower, its temple continues to be a visible witness to Christ’s saving presence amid the growing rrago of our beloved city. Ω

“A word that springs from the pastoral heart”

Holguin, 21 August 2018 Dear priests, deaconos, religious and members of the diocese’s communities: I convey my greeting to you in the same words with which the Apostle did it at the beginning of his […]

New priest ordered in the Archdiocese of Havana

By the imposition of the hands of the Archbishop of Havana, Archbishop Juan de la Caridad García, he was ordained a priest Royne Rodríguez Alpízar in ceremony held on Saturday, June 23 at the Cathedral […]

At the end of the closing mass of the Synod, held on the morning of October 28, 2018, in St. Peter’s Basilica, the following letter from the Synod Fathers was read to the young people. […]