The way director Jessica Hausner (Flora, Inter-View, Lovely Rita, Hotel, Lourdes…) distances in Little Joe (2019) the name of the actors does not seem so significant, because the British-Austrian feature film is hardly in its beginnings. What does catch the eye right away is how the soundtrack baffles in a growing squeak, reminiscent of the vibration or singing of cicadas. This insect, which feeds on the substance of trees and plants, presents its distinctions according to the genus: the female lays her eggs and almost instantly dies, while the male is the one who is intones to attract. But when the intonation is excessive, its main purpose may remain in the attempt. His uncontrolled gain is his downside. On the other hand, the very young cicada is buried and, when it emerges or moves its body, it delivers a visual spectacle of nature. Opening its wings, changing color and the size of its body denote the appearance of a new being. How much we appreciate its appearance is so surprising, that only a specialist can understand some of the insect’s internal functions. The soundtrack will evoke the timpani and soundboards of cicadas, although it is a plant made in a laboratory, the starting point that will trigger the conflicting facts of the story. 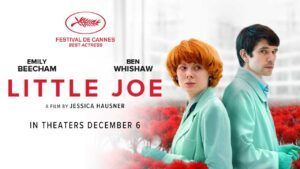 At the beginning of the plot we warned a team in the experimental cultivation of a plant whose flower is blue. Your dust is wanted to produce the feeling of happiness to those who inhale it. It will be a specific plant for every human being who decides to host it in their home. More than pet or decorative element, what is intended is that it becomes a friend to attenuate loneliness and even be a kind of training for love. In the same greenhouse, scientist Alice (Emily Beecham) has sown a different variety: it has a similar stem, but devoid of leaves, although the main difference is concentrated in its red flower.

Alice explains that it is a sterile species. Emancipated from reproduction, the exhibition encourages discussions concerning its effectiveness. Its independence will not prevent it from fulfilling the function of making human beings happy, botany argues. It will be called Little Joe, alluding to his son (Kit Connor), who already has a specimen in his house. “What is really important here are the possible allergens of this pollen. I mean, that would be a gift to the Greenpeace. A genetically engineered plant that spreads unknown allergens. Excuse me?” proposes one of the co-workers. One plant – he lacked to add – that produces an alarming red flower. But he, unable to estimate his external attributes, is far from imagining Little Joe’s hypersensitivity.

Red, as opposed to green, is a predominant symbolic color in the scenery and in various complements of the characters, such as shoes and clothes; it also excels in seats, shade of walls… Repair yourself in the colors of the coats Joe and his father wear on fishing day. Perhaps we might suspect the use of red for an aesthetic purpose only, such as when the boy looks around the monitor at the botanists. The seats are purple, like your slippers. But when Chris’s character (Ben Whishaw) sterilizes and watches that one, he celebrates his footwear. The situation invites us to look again at the syncyrony of red in the living room, as well as reaffirm Chris’ attraction to the child’s redheaded mother and man’s subsequent preference for the red flower to blue. In principle, the various shades of red converge to dynamit allegorical conceptions associated with love, passion, life, durability and even the ethically and politically correct. 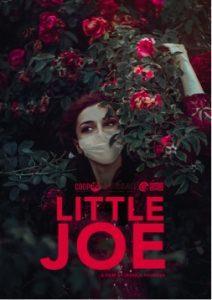 Now, above all, what is being questioned is the concept of widespread well-being, seen as ideal by homogeneous. Are you concerned about how much is behind a similar point of reference and reverence, which conditions a single way of acting and relating? Of course, more so when it is not how much it matters, but at least until it is thought and proceeds in the same way. If human beings do not achieve certain happiness by common agreement, then is it necessary to manufacture it to whatever it gives rise? It will matter both the sums and the consequences.

After achieving coincidence or balance in terms of compliance or substitution of who deserves our time, what are we exposed to as a species? In this sense, Little Joe, today a sci-fi account, warns of the existing risks of being stoked by a “timely” approach, where the subject, aware of his difference, but no time limit to defend it, is rejected, when not condemned by the civilizing ensemble.

There is no compensation, but justice