Taking advantage of the benefits of the networks, as of today we offer our readers fragments of works written some time ago. We begin with the sharp humor of maestro Héctor Zumbado. Although these are texts somewhat distant in years, with logical differences in contexts, if the person reading entertains himself in changing a simple date, a place, or some adjectives or circumstances (especially in relation to prices), they will be valid again their arguments. The works correspond to the pages of his plates Una de cal, published in 1991. Enjoy, once again, the wit and sympathy of Zumba.

A friend asked me the other day how bureaucracy could be defined.

“Look,” I said, “it’s not easy because the concept is broad, it covers a lot.” It can even cover an entire region or even an entire country. But let’s say – making an attempt, a deep intellectual effort – that one of its definitions could be: “The tendency, which sometimes becomes an obsession, to control everything down to the smallest detail and, later, the inability to carry it out ”.

“I don’t understand very well,” my friend told me, “I need an example.”

Well, a good bureaucrat, a legitimate bureaucrat, thoroughbred, expects Quivicán croquettes, for example, to be exactly the same as Gibara croquettes. He then creates models, writes guidelines and circulars, prints posters, folding pages and murals explaining in detail the intimate parameters of the way and manner in which a croquette should be made. He calls meetings, calls by phone, local and distance, uses the telex, spends gasoline visiting units, exhorts, explains, encourages, enthuses and guides. And then, of course, the Gibara croquette does not turn out to be the same as the Quivicán croquette. Because a kibble is a kibble and not a half-inch screw that comes out of a lathe. Although, of course, there are kibbles that look and taste like half-inch screws.
(II)

In all parts of the world, care is taken to select the reception staff who face the visitor to make a good impression because, precisely, the receptionist is the front, the face of the entity. That is why they are chosen with care. Preferably, that they are friendly, of good appearance, efficient, smiling, intelligent, pleasant and diligent. It is always done that way, everywhere in the world.

Everywhere? Not quite. There are exceptions. As happened to me the other day in an important place linked to the mass media and whose name I do not give so that it does not pass public punishment. I had a meeting with the director of that organization, and the receptionist did her best, with the neuron that was working at that moment, to make me pass. She confronted work with the name, but she couldn’t handle the last name. They were endless, slow, anguishing, desperate minutes, until finally the pass ended. Hertor Sunfardo, said the slip.

–Company –I said– humanity thanks you that you were not in the last moments of the Titanic making the passes for the lifeboats. 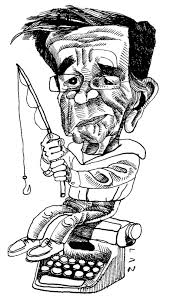 It all started in August 1983, when the construction boys came to the Focsa building with enthusiasm to remodel the Publicitur offices, which occupy the ground floor, on 19th Street.

A year later, in August 1984, the work was not finished yet, despite the fact that it was a single story, and how cheerful and enthusiastic the brigade and the officials leading the work were.

Another year passed – August 1985 – and the work was still unfinished, although it is fair to say that something had been advanced.

In August 1986, three years after that August 1983, the shiny new offices could not be opened. However, faith did not wane.

We would not want to depress these enthusiastic builders by telling them that the thirty-five-story Focsa building was built in a year and a half in the 1950s. In other words, if this brigade, which has taken three and a half years, had been given the task of remodeling the building, they – and their descendants, of course – would have taken one hundred and twenty-two years and six months. A tin more than it took for the pyramid of Cheops.

What is more difficult, do a degree thesis or present it beautifully? The question is profound. To match the coveted Lic…, the student has to make a serious intellectual effort. He must propose a thesis, develop it, substantiate it, investigate, do interviews, consult bibliographies, fall behind the tutor, and then write it with a certain coherence without many spelling mistakes. A truly “tetanic” work, as an Asere graduated from Philology told me.

All this, however, seems silly next to the monumental effort that the boys have to make to present the diploma work, because, as has become customary, it must be presented beautifully, because sometimes the formalism, the protoculism – How do you say? – They eat us by one leg, and we are slaves to the safari, the embroidered guayaberita, the little speech read and the bouquet of roses wrapped in nylon.

Eduardo, a recent graduate of Art History, tells me that his was relatively easy. The folder he got with a lady who is dedicated to that, who charges sixty pesos, and whose business flourishes in times of thesis. The typist, paying sixty cents a page, one hundred and twenty pages, seventy-two. The role she obtained was by making a size in her father’s work, and the style correction by means of another size with a concealer. Total, a wound in the family budget, much more, without a doubt, than it cost García Márquez to print his speech before the Swedish Academy to receive the Nobel.

Of course, Eduardo says, the ideal would be for the University or the Faculties to be able to provide these services to students at reasonable prices. Of course I do, Eduardo.