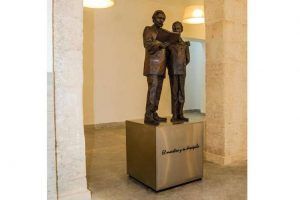 “There is a cluster of essential truths that fit in the wing of a hummingbird,

and are, however, the key

A while ago I was at retirement age as a teacher, however, in some way I continue – under other circumstances – active in this profession. Who – to paraphrase Dulce María Loynaz – without leaving traces, gave his whole life to the Academy, today I leave this testimony about what the exercise of such an activity has meant in my case.

I have no idea how long it will take for my words to appear to the reading public, so they will not be a direct response to a recent statement from a civil servant on what a university professor should look like in Cuba. If you don’t do and repeat as a parrot what I say, because yes, you will be expelled from this institution, it was his message. The employee, with a high position in the structure within the higher education system, once again called for blind unconditionality, the outrageous repetition of past outlining. I will not speak on behalf of that cloister to which I belonged for more than thirty-five years, it is not my responsibility, but I feel a need on a personal level to express something. It is not possible to remain silent, teachers are not idiots and we are all “cardboard” philosophers. I must confess that I was annoyed by that vocinglero speech, retrograde, manichean, menacing and, above all, sad.

Before, I clarify that I was a woman dedicated to teaching at the University without great stridentity, a perfect unknown in the middle, without medals, or certificates of “socialist emulation”. My awards have been few, however, of extreme depth, such as having been convened once – together with some prominent faculty colleagues – on the initiative of the students themselves, to give me a stamp that read: Academic of Honor. The other, have been brief anecdotes that feed me to this day, like that where a student of the Faculty of Mathematics, where I was appointed during several courses to teach in the area of social sciences, wrote to me in a paper at the end of the teaching semester, because I had a habit of asking students for opinions on the quality of teaching given anonymously : “Teacher, I write you my name, because if I don’t, your course wouldn’t make any sense. You’ve been the only one who’s taught us the good and the bad of socialism. Please don’t change, because if you change, your classes wouldn’t do any good.” I was very excited, I kept that little writing and today it is the equivalent of the award for “The Work of a Lifetime” that I did not receive.

In fact, that yellowish paper mentioned above is an incomparably greater treasure than an official, cold painting, which does not speak of the pain of the nineties, of the misunderstandings, of the fear of censorship for your ideas, of the coffee and cigar that we consumed to mitigate hunger, of the bicycle to arrive on time to the class shifts, does not reflect the anguish of clothes and shoes unpresentable , the years studying in precarious conditions, without computers, for a court to give you a brand new degree of Doctor of Philosophical Sciences and then receive nothing to improve the quality of life.

I will once tell a group of the sociology career in the subject of Cuban Thought the meeting between José Martí, Antonio Maceo and Máximo Gómez in a hotel in New York, where the Dominican general was staying. The latter, who had received a towel from an employee to take his bath, said harshly to the Apostle, attend to what Maceo has to say, undervaluing his person. Martí was silently outraged, said nothing at the time and withdrew from the room. Within a few days, already serene, he wrote his famous letter to Gomez of October 20, 1884. I hope that the person who assumed the right to define what it means to be a university professor on this island will read it to him one day, because it concentrates the martyred essence of what must be understood by democracy: “A people is not founded, General, as a camp is commanded”. And the Master said more in the misiva: “The homeland is nobody’s, and if it is someone’s it will be, and this alone in spirit, of those who serve it with greater detachment and intelligence.”1

May all bureaucrats linked to education on this earth have just realized that the solution of our problems is not found in hollow slogans and expressions, because, among other things: “we need to open a campaign of tenderness and science, and to create for it a body, which does not exist, of missionary teachers”2 and not of doile repeaters. Ω

“The school does not replace the parents, but complements them”