On January 31, 2011, due to declining demand for gypsum, American Gysump Company closed its 88-year-old factory in Empel, Nevada. In July of the same year, the postal code of Empel, 89405, was discontinued. With that information begins Nomadland, and in the continuity of the scene we see Fern, the protagonist, choosing the elementary articles that he will take, and saying goodbye to the rest, to restart his life along the way, on that journey to nowhere he will undertake.

It’s not hard to see why Nomadland is reaching awards and nominations above the rest of the 2020 film productions: it’s a film that deals, in depth, with a cardinal theme in our lives: our place of belonging, in connection with others, like family and friendship, to which one of the oldest issues of all cultures is organically : the trip.

Nomadland is a road movie, or road trip, a very unique road movie, because Fern is not running away from anyone, is not traveling back home, like Odysseus, nor is he looking for the promised land, or exploring spaces to establish himself, like the pioneers of the West. Fern’s journey is in circles that always refer to the desert.

But Fern did not choose to be a pilgrim: her personal situation threw her on the road. Her husband died, the plaster mines in Empel closed, she was out of a job and homeless. So she had to turn her RV (recreational vehicle) into her home, and go out and do occasional work, while (us) discovering that universe of nomads who, like her, set out on the march, went out on the road; and that’s where the story is being built, where Fern finds a diversity of people who, for multiple reasons, live in no man’s land.

But if road movie exists as a cinematographer genre, an expression of a subculture that even possesses a cult book in American literature (Jack Kerouac: On the Road), and that genre has produced not a few memorable films, the characters, the situations, the conflicts, that we find in Nomadland are different. Here we will find neither bank robbers, nor lovers on the run, nor hippies on motorcycles.

To make this film, the production team, led by Chinese-American filmmaker Chloé Zhao, set out to make contact with the most real and visceral nomadic world. Thus the script was sprouted, characters were coming in, and the stages were filmed.

Significantly, when we look at the Nomadland poster, we notice that seven characters without an actor profile appear, such as Linda May, Swankie, or Bob Wells. They’re all real nomads. The most celebrated is Wells, founder of CheapRVLiving, a kind of guru, a leader of the nomadic lifestyle, who summons thousands of people every year to a meeting in the desert to expose their ideas of what it’s like to live in a caravan. 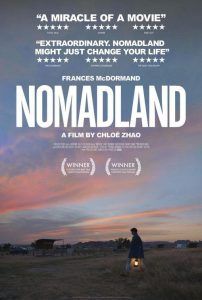 The idea of filming Nomadland was by Frances McDormand (protagonist and producer), who had read Jessica Bruder’s report Nomadic Country and was excited to take him to the cinema, for which he chose Zhao to direct it. McDormand made that decision after seeing a way to capture the stage in The Rider, the latest realization of the Chinese filmmaker.

To the same extent that we feel the energy of the nomadic community grouped by fire, or chatting in small groups, so too comes the pall through those natural scenarios that contrast with the immense asphalt ribbon: trees, rivers, or starry sky, where Fern’s body and soul rest, as relief on the long road, on the journeys that take it from one place to another.

But the beauty of Nomadland transcends the filmed scenarios, inhabits the interior of Fern, Linda May, or Swankie, human beings whose stories touch us in more than one scene, and especially when Fern, in the solitude of his van, looks to a past where he was happy, at a time that will never return, or when he fires the year alone, between his memories and the cold. It is difficult to find, in recent cinema, a more overwhelming image than the one where Fern goes for a walk, in the snow, shouting Happy New Year in his parking lot without anyone responding.

Like his family and one of his friends, who offer him his home to live, viewers wonder why Fern does not welcome that hospitality. Why you go out, in the middle of the night, to sleep in your vehicle, if you can do it in your ex nomadic friend’s house, where you have traveled from far away, and where you have found the warmth of a space and a family almost postcard.

She asks her, too. To know his answer you have to see the film, one of the strongest candidates for Best Picture at the 2021 Oscars.