Troy Hall and Lee Karaim have written the great screenplay for Peel (2019), a simple and beautiful film directed by Rafael Monserrate. With Emile Hirsch, Amy Brenneman, Shiloh Fernandez, Jack Kesy and Jacob Vargas, among others, the feature film stands as an attainable account not so much about the family as it is about intercultural treatment.

Peel, literally shell, is the name of the redheaded protagonist of the film of the same name that Rafael Monserrate has directed from the screenplay of Troy Hall and Lee Karaim. Emile Hirsch again offers an unforgettable performance such as Towards Wild Routes (Sean Penn, 2007) and Milk (Gus Van Sant, 2008), although Hirsch, before and after those feature films, has been under the baton of directors who know how to take advantage of its versatility, which is conducive to all kinds of characters. Now he assumes a thirty-year-old boy who looks retarded. But it is only different, “special”, the adjective that is no longer applied to him in this account that contemplates both abandonment, separation and death, as well as loneliness, the search for family and understanding.

But Peel as a cinematic work is striking first of all because of the domestic context in which the protagonist grows. Lucille, his mother (Amy Brenneman), has raised him in the house in his own way: est distanced from the usual schools and educational methods and under his protection, which includes breastfeeding him until he was ten years old. Later, when he is reborn with one of his two brothers, he advises him not to tell anyone that detail. More than laughable, it’s embarrassing, he tells her.

Without become a hermit, as a child, Peel will create his own spider web or crystal ball. The world is, according to his experiences, how he has experienced it from the solitude of his home. His distinct upbringing and the estrangement of his brothers, have made him a virgin subject in the face of relations with others. He is so oblivious to love and friendship that, when he discovers them, his world expands with a speed he never suspected. 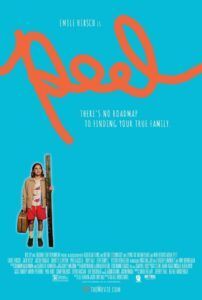 The drama is seasoned with funny situations when failed gambler Roy (Jack Kesy) and Latin libertine Chuck (Jacob Vargas) come into his life, who seem mere opportunists… And they are. But they have the capacity of wonder and the power of tolerance and change in the face of the naivety of a child man like Peel. When Chad (Garret Clayton) then appears to occupy another room of the house and prepare the first party with strangers, attended of course by the protagonist, there are fun moments that range from Roy’s surprise to the first guests of the house, to Peel’s contradiction by a mistake of that, through contact with the drink and imitation of the dance of Asian friends. The moment of dancing is revealing, for it is appreciated how imitation immediately becomes a liberating act of innocence; for the first time, Peel decides to have his initiatives. A smiling Chad observes him and nothing is questioned. In fact, only one character calls him an and another (the brother) asks if he is retarded. Afterwards, they themselves admit that Peel is special. While he has the courage to interact with the outside as he leaves his home to find his brothers, to endure even the indifference of one and the rawness of the other, he remains a good person who has sought answers for twenty-five years. He matures but doesn’t lose his candidness. It may have to be admitted: it’s Emile Hirsch’s best role to date.

It’s a great character movie. The undisputed pillar is a very pleasant script that guarantees justified occurrences, where one laughs more at what he cries because the protagonist neither pity nor intends to corporealize the course of an era to the Forrest Gump (Robert Zemeckis, 1994). By the way, by caring for his characters with all possible spontaneities, in any of the physical and spiritual journeys, it is not at any time a pretentious work. And there concentrates Peel’s greatest merit.

The premature pain of life

There is no compensation, but justice