Today, September 29th celebrates sixty-seven years of profession Father Manuel Uña. He has been, for more than twenty-five years, the close friend of many Cubans, Catholic or not, of simple people, people “on foot”, of intellectuals, of countless young people… He is a priest to which anyone can reach and stumble upon the most authentic gesture of affection. The harmony of each word bliss leads to love it… Because.

A natural of Castile the Vieja, Spain, he took in Granada (1953) his religious vows of poverty, chastity and obedience in the Order of Preachers (Dominicos). At the age of twenty-three, he was ordained a priest on March 15, 1959. Although he had visited Cuba before, he decided to stay permanently on the island in October 1993, in the midst of a blackout. Hence he valued so much the first gift he was given after his arrival: “a linternite, which is a symbol, because it serves to illuminate, not to dazzle,” he said some time ago in an interview.

Father Nail is one more Cuban. It is in its nature to engage with people, with the history of the country, with the reality of the Church, with everyday events that generate happiness, nonconformity, sadness, hope or hopelessness in this people. Cuba’s future is also its own future, cause of development and daily cause of prayer. He walks the road of Cuba with the certainty of being another walker and with the assurance that his faith in God and his mission to proclaim the Good News brings him.

Eager to know the reality to which, without missionary, he became a part of it, his first readings were the final document of the Cuban National Ecclesial Meeting (ENEC), some works by José Martí and the pastoral letter Love awaits everything. He would soon find and fall in love forever with the narrative and poetics of Dulce María Loynaz and Eliseo Diego.

His itinerary through Cuba surpasses the life experience of many young people today; It also disadvantages that of my daughter, who has a special admiration for the person, who says, “is the model of priest that the Church needs, with her ear glued to the earth.” To the Cuban history of Father Uña, he is accompanied by periods of scarcity, blackouts, misunderstandings between the Cuban Church and the State, openings and closings of dialogues between the two, necessary silences… also claims aerated in time of imperious pronouncements. But in it we discover the truth of a heart ready for sincere, creative and free understanding and dialogue.

There are images of him that are part of the history of the Church in Cuba. Perhaps the most recurrent is the one where he appears in the Aula Magna of the University of Havana on the occasion of the visit to the Island of Pope St. John Paul II. He was there, in the front row, with the pride and humility of those who are known to be part of the founding family of that institution: the Order of Preachers. 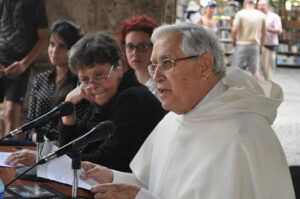 Just in that founding past, which places this religious community as the promoter of education in Cuba, find today’s Dominicans the inspiring sap to re-adapt their charism to the new times. From this jealously dreamed desire, the Classroom and the Fray Bartolomé de Las Casas Center were born, as spaces of formation, encounter, dialogue and promotion of the human person. Perhaps that is why many of us want to see Father Nail in the pulpit of the Aula Fray Bartolomé de las Casas, as if somehow his figure were integrated into the background painting, which shows the image of the Dominican friar who defended the freedom and dignity of the Indian, and denounced the unjust character of war and conquest.

Referring to this initiative that already adds years and prestige, Father Manuel Uña once said: “The Center and the Classroom are a platform of training and culture, but above all of dialogue with the university world and with everyone who loves and seeks the truth. In this way, dominicans in Cuba … we accompany the needs of our people for intellectual growth, to be able to answer the questions that new times ask us, we try to create spaces of admission and dialogue with those who think differently both politically, religiously, and socially. We are committed to a new horizon that opens spaces for a better society that includes everyone and where everyone can be partakers and creators of their own destiny.”

Cuban at last, although born in another land, our father Uña has made a pilgrimage with our Lady of Charity of Copper, has had the privilege of receiving three pontiffs, has rejoiced, in a full heart, with the restoration of diplomatic relations between Cuba and the USA, and has therefore suffered the events and postures that have subsequently hindered them.

The latest events have been presented to us, first, as confessor for fifteen years of Cardinal Jaime Ortega Alamino and, second, as spiritual guide and close friend of Eusebio Leal Spengler, Historian of Havana, both deceased. With sincere humility, Father Manuel Uña publicly thanked God for en allowing him to walk in the company of these two good Cubans. The public relevance of both figures brought to light the silent mission of this priest who listens and assists those who, in the midst of difficulties, dark nights, sickness…, need their closeness.

For our dear father Uña, his life in Cuba, “in this beloved homeland”, has been a life between two lights. “One light is the community of Lateran, where I have lived, and the other light is the people I have met. Living and finding articulate the same story, we live to find and find living. Coming to Cuba has been a gift from God, which was confirmed especially when I was able to celebrate my fifty years as a priest with the community of St. John lateran and I found the temple full of believers, and others who claim not to believe but who are credible. At that moment I could perceive that this people, to which I love so much and which I have accompanied, celebrated with me fidelity to my ministry, which has been an immeasurable sign of the affection of the Cubans. I never thought about what Cuba was going to give me.”

Dear Father, you can’t imagine how much you’ve given Cuba. Thank you. Ω

Reason for hope for the Cuban Church