of sweet and comforting: family and home.” 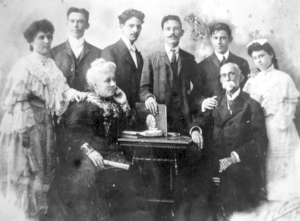 When Gomez met Manana, 1 was thirty-two and she was seventeen. His biographer Ramón Infiesta describes him: “… he is dry and rough, she has the tender and affable character.”2 Behind the skin of the reluctant combatant hides a tender and loving husband. She always accompanies him and sometimes waits, gives him children who are born, grow and suffer the fate of the father. That hardened man on the battlefields who used to fight boldly, often felt fear, not for personal luck, but for the buds conceived with his Morning in the manigua, subjected to the harassment of the enemy.

In the paddocks of La Reforma he saw his Panchito born. In other mountains his adored Clemency, the eldest of the girls, as well as the others, in the midst of the ardors of war or in lands of Central America and the Antilles, always besathed by misery. Another of his biographers, Benigno Souza, tells that the Days the General spent in Jamaica were the cruellest and most humiliating of his life. He is forced to work as a day laborer. Some comrades-in-arms help him financially. General Julio Sanguily sends him a modest sum and begs him to return his machete, with a silver handle, which he had entrusted to him and wishes to preserve as a relic. Gomez replied: “As for the machete you ask of me, all I have left is the blade. One day, when my children had no bread, to feed them I sold the silver of my fist.”3

The whole family is engulfed in the maelstrom of war. Most of his wife’s relatives fell into the contest. Only Sixtus survived. Elena, Eduviges, Theodora and Tomasa died of the sisters. Joan survived, and tomorrow itself. If any joy gave the life to the Generalissimo, it was that of having found, in the midst of which they all called the Great War, the companion of his life, faithful and stoic in the face of adversity. Martí recreates the family, as only he knew how to do in his article “El General Gómez”, published in the newspaper Patria, on August 26, 1893:

“At the door of your house […] come out to receive him … the children who were born to him when he was fighting to make a people free; the woman who gave them to them, and raised them in the passage of fighting in the cradle of her arms, awaits him a little behind, in a silence that is delight, and bathed the face of that beauty that gives souls true greatness; the daughter in whom her homeland twinkles, reclining on the mother’s shoulder looks at her like a boyfriend: that’s Maximo Gomez.”4

The morning she inhabited poverty without a complaint, and took care of the officide, as she watched her children sick and died, which fed the home during the father’s long periods of absence. They say that, on one occasion, in the face of their precarious situation, they are assigned a pension. His answer is not expected: “It is an immense joy for me that my son Maximito, a man already despite his 17 years, worthily represents his father in the house, and that with his daily work he will meet the needs of the family. We are not willing to make the money to be used in gunpowder into bread.”5

She is the same heroic fighter who gave to Cuba, as a tribute, to the husband and children she loved so much. And he saw, when family stability seemed to be attained, the husband re-departed into war, already a man who was beginning to grow old, to materialize the dreams of three decades, and let him leave with Martí, as he later saw that he followed in the footsteps of the Generalissimo, that flower of love and courage that was Francisco Gómez Toro, Panchito. On Monday, December 7, 1896, the young assistant Panchito falls, vilely macheted on the corpse of lieutenant Maceo. Upon learning the news, Gómez is stunned, writes: “[…] I feel in my chest a feeling of vengeance, not for the death of my son, for war is coming to die, but for mutilation, for the desecration of his corpse.”6

Days later, he sends a shocking letter to Maria Cabrales, the Titan’s widow: “With the disappearance of this extraordinary man you lose the sweet companion of your life, I lose the most illustrious and the bravest of my friends and lose, in short, the Liberating Army to the most exalted figure of the revolution.” He tells Mary that, together with the heroic warrior, “my Pancho” also fell, and that they were buried in the same pit, “as if Providence had wanted with this fact to grant to my misfortune the sad consolation of seeing together in the tomb two beings whose names lived eternally united in the bottom of my heart”. He adds to the line often: “You who are a woman, you who can without blushing or blushing to anyone surrender to the ineffable overflows of pain, weep, Mary, for both of you and me, for this unhappy old man is not at the privilege of venting his intimate sadness by unleashing himself in a watering hole of tears.”

On 17 June 1905, in the morning hours, the chief general of the freer Army, dying, bids farewell to his wife and children. He goes into agony and dies at six in the afternoon. Dismayed, the village agglomerates in front of the 5th street house. corner to D. Tomorrow cries heartbroken in one of the rooms. Journalist Ciro Bianchi says: “The government comes in full, parliamentarians are present… His daughter Clemency realizes that the corpse remains isolated from humble sectors. Angry question: ‘Where is that town that my father liberated?’ It is then that the parade of the deposeed begins, endless”.8 It is the greatest burial ever seen in Cuba.

5 Cyrus Bianchi Ross: “So was the Generalissimo”, Rebel Youth, 6 September 2009.

“The historical resignation of Bishop Emeritus of Rome Benedict XVI, is a fact that has transformed the way we understand the relationship with power in humanity.” With these words, Mr. Antonio Olivé presented last Thursday, […]

The Cuba We Dream-GEN FEST

From 10 to 12 August an unreleased event took place in Cuba: Genfest.1 For its realization, Havana hosted 500 young people from all over the island. “On Sunday, August 12, Cuba’s first Genfest was concluded, […]

All our people are made known, and will be effective after its publication in the Official Gazette Paper, the dismissal of Numancio Guirola as holder of the Ministry of Office Materials, a position he held […]