“A social imaginary is a building inhabited by hopes and desires;
a building made of ruins,
thoughts
who insist on appearing, of beliefs
that go beyond prayer;
a building whose walls are made of images and words,
and whose foundation is nothing else
that contained time,
that is, history, memory,
fragments of scattered identity
in the symbolic ritus
community.”
Pedro Agudelo Rendón 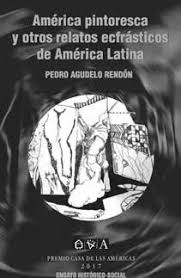 We are often asked to call things by name. Not only when talking to a friend or disserting for an auditorium, but also when you write, there is an attempt to find the precise and just word, the one that concretes and, at the same time, favors the image behind and before it is said. But the image, known or not, can gain other strength by new connotations according to the discourse that supports it. This is the first balance of the initial pages of picturesque America and other ecpheric accounts of Latin America, Casa de las Américas Award (2017) in the section of Historical-Social Essay, written by the young Colombian Pedro Agudelo Rendón.
Communicating what is known about something is starting from a personal interpretation. Nothing as difficult as doing(s) to understand once we are mediators between a reference and a recipient, for all know-how shared, because it is already subjected in advance to specific interpretations and assessments, walks with unequal quotas of reasoning and imagination. However, as you clarify and reveal processes of sociocultural exchanges, where historical and fictional are constantly intersecting, appreciation does not take long to appear.
Amen to question what is known as the pejorative of the concept of the picturesque and, therefore, to reconsider it; in addition to inserting himself into the imaginary and collective memory of the Latin American context, Agudelo Rendón takes advantage of the ecpheric, which is reference, notion and historical method by usable, but not familiar by name. It is rarely proceeded in a way and even comes to an outcome that others have already known and therefore have named. But no qualifier, however anonymous, consumed or late to be asked, exceeds the instructions that lead to clarification. It is also the case of ecphrases, which combines literature and plastic, visuality and art criticism.
Beyond being a primary verbal discourse about a visual representation, without underes belittling in any way all kinds of news informants until it also considers who is told a book or recounts one film to another, to put some frequent examples, ecphrases is more respected to the extent that it knows how to take advantage of interartistic relations, because of this it is enough to organize a story that , in principle, is a description of the interpretation itself after the eye stops to look and, unhappy, uneasy with reason. Ecphrases supports an image to explay or hide it. For the sake or worse of the reference, at this point almost anything is possible in terms of association. The ecpheric is momentary dependent on the representation of others because, suddenly, it shows its decision of expressive freedom. Hence, while the interpretive phenomenon begins in the look at something, it can be fully realized during the discursive process itself, whether oral or written.
This refers to the so-called literary ecsphrases as “it may unfold the meaning of a work, or it may overshadow, hide or sublimate it; while critical ecphrases will always be intended to unroll the meaning of artistic works.”1 Literature and criticism on accounting for visual representations would also define ecphrases, which is the concreteness of one image – or attempt by it – thanks to another; representation of another representation; the effectiveness of the imaginary within a fictional (or not) story in and out of history. By the way, essays when not the art criticisms of José Martí reveal an unmeasured ecphertic rapporteur. Check it out whenever the reader wants.
In rare cases, we often hear, “What a picturesque story or portrait!” The expression refers to a representational constant that, for some, falls on the stamp of no-brainness or stereotype, always specific, repeat offender, limited. The foreign visitor is accepted, but not the inhabitant of a Latin American region who repulses his own. To criticize ramplone forms that extract and sell the most epidermal thing in your country is to celebrate. Now, let him detracde from his reality because, strictly speaking, the position of rejection has overcome equitable thinking and feeling, that is regrettable.

The picturesque thing is also the visual spelling that the inhabitants of a region or country make up from within and then share with the rest of the world. The collective imaginary that has a cultural landscape, where all kinds of more general and specific landscapes are in recorded, has taken much of the picturesque in the icons that remain and travel through photography, cinema, music, painting… Calling something or someone a quaint appeals to the etymological, “in the manner of the painter”, as Agudelo does. In his attempt to represent behaviors for the foreign visitor, Latin American refers “spontaneous” and exaggerated to what he knows he can like and sell more. Official and “self-employed” tourism aspire to make greater profits to the detriment, often, of the picturesque. For many image doers and receivers, the most representative has to come not so much from the most visible, but from where the greatest attraction of a context loyal to what is already imagined by the knowledge of hearings or by the atmospheres of certain photographic and pictorial references. Unfortunately, picturesque is also the reality when it suspiciously mimics art and is overrated by its theatrical reproduction. In the precise and comforting Chapter IV of the first part of this book (“Scenic America: European Imaginary of the New World”), the author recalls:

“The aesthetics of the picturesque arise in discussion about beauty in the twentieth century, which would have an important effect on the art of the later century. The picturesque is associated with scenes of landscapes, types, customs; but it also refers to the plastic language or style by which things are painted vividly. Hence, precisely, its shocking character in some cases, for it is also quaint that goes through quirky and too lively for the eye.”2

By the chapters that make up “Images of Resistance”, the second part of picturesque America…, we notice a dialogue already traditional, but still in force by the cultural association in favor of approaches between past and present, tradition and contemporaneity, where history allows us to show other readings about recent artistic poetics. Now, the author does not need to add to his environmental concerns those utopian tones of somewhat homogeneous sociopolitical inclusions and, by now, far from how much this world can and does not really suit him to achieve. Holds Rendón:

“The sciences must also allow a better understanding of humanity and create the conditions of possibility for better planetary coexistence. But the reality of Latin American countries insists on denying that possibility. She shows us every day that this is enormously difficult, and it will continue to be if the world does not set a balance so that there is, beyond a discourse by the representatives of the ‘big’ and ‘small’ nations, true social equality.”3

I’m not shyed by the pessimistic reader and confine me to a certain ideological qualifier. But really that “true social equality” thing in a speech like Agudelo Rendón’s open to all kinds of ecpherical accounts? The balance is to balance, not to match and less to match something or someone. Then why jeopardize the conceptual and syntactic amenity of an essayism taken advantage of how many cultural references come as a ring to your finger? Not for nothing, from beginning to end, the very title and theme of picturesque America and other ecpheric accounts of Latin America justify its insertion into that cultural historical becoming as authentic as imaginary and poetic. Ω

There are no related items.

When I discovered her, sitting on Grandma’s lap, she was traveling on a route 20 “Via Hospital”. It was a gigantic play. I had a vast staircase and from above, a woman-statue looked at me […]

A modern Meteorite Research Laboratory was to be built there. He was leaving. Because when the construction brigade reached 85% completion of the work, the project engineer – foresighted him – realized that the vibration […]