The Twist (2021) by Martin Owen wants to dissociate himself soon not from the literary reference of Charles Dickens, but from the probable association with what is perhaps the most remembered film adaptation of all time: Oliver! (1968) by Carol Reed. At the beginning of the film the protagonist is heard saying: “I will tell you the story of a young man named Oliver. He has no songs or dances. And not a happy ending ”. Spoiler warning might however encourage one to stay and watch it to the end.

The subject of adaptations, versions or inspirations in Shakespeare, Tolstoi, Faulkner and, among many other Dickens, does not stop. Cinema was born and grew by virtue of literary gains. It didn’t take long for it to be written as “if a movie were being told.” The classic Oliver Twist, in his insistent adaptations to the big screen, shows how far cinema can and should be subordinated because, in short, it is another creative field unlike literature.

A young thief prior to the main character steals an envelope from a contemporary library and, by running near one of the bookshelves, the camera allows the viewer to notice that he collects several Dickens books, especially Oliver Twist. From the first images we already know that it is a re-enactment of the marginal, rogue and surviving hero of the 19th century. In addition to this and the presence of Rafferty Law as Oliver and Michael Cane in the role of Fagin, David Walliams, Lena Headley, Sophie Simnett, Rita Ora, Franz Drameh … how different will the director try to contribute? The Victorian crime rearrangement in the 21st century. 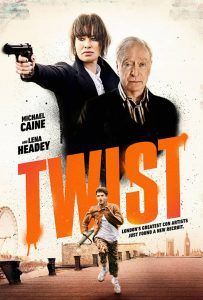 A lover of Pre-Raphaelite painting under the influence of his mother, Twist trains himself in a knowledge without foreseeing how much it will affect his future vocation. But he is far from a beaten art dealer like Fagin. The young man is a graffiti artist and specialist in the practice of parkour. The story, which seemed to be an insertion in the terribleness of the crime and which reserves the loss of innocence and a loved one by ellipsis, wants to become a line of refined misdeed. Striking a big hit, stealing a famous William Hogarth painting from a successful gallery owner is the real crux of Twist. It does not matter to the director and the almost ten writers? explore the psychology and affective deficiency of the protagonist or even externalize the viciousness of the street and sometimes the unfairness of society itself. Rather, he is interested in the effect of another robbery of the century but with teenagers.

With a dead man on the road, a forced fight in a bar and a more moderately choreographed one, the images reversed at times, this recent adaptation of the Charles Dickens narrative entertains little in its tangled plot. The script is obvious. What really concerns here are the movements on rooftops and esplanades, where Oliver Twist lags behind both the version of 1912 and that of Romans Polański of 2005.