There are characters and deeds in Antonio Campos’ The Devil at All Hours (2020), (Buy it now, 2005; Afterschool, 2008; Simon killer, 2012), who may stay on the road, by ellipsis and before by the voiceover of an omniscient narrator, who has already revealed the fate of some who seem to leave. It is as if, by elimination, what tarnishes the major story of this feature film is removed. However, in its structure, there is a retake of the suggested to detail it. Is that why the film stretches so far?

But spreading is not a problem. It takes up what is usually left, so that there are no loose ends left over the death and sacrifice of others. It began in the 1950s in the United States and, without pretending to be a sociocultural portrait of the nation, The Devil… it tackles religious fanaticism with everything it understands and overflows: from the concern for the difference of the new one that arrives, to the fundamentalism that is generating violence.

The director is responsible for ensuing that, from the beginning of the plot, one suspects a transitional peace. As the soldier (Bill Skarsgard) attempts to join the Ohio town of Knockemstiff and evokes the American fighter crucified by the Japanese of World War II, the viewer is alerted. For of illusory harmony, you will access psychological violence that will soon be physical and well explicit. 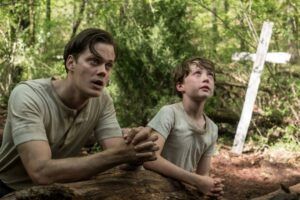 Indeed, becoming more than the way fanaticism operates, Campos’ psychological thriller appears to remain anchored in a catalogue of violent facts, where each will be inscribed in a “justice” subjecting of misery, adjuster of accounts. Who is saved in this story? You’d ask anyone.

You may not notice much, but the detail is by script and performance: when arvin grew up (Tom Holland), Uncle Earskell (David Atkinson) celebrates a birthday, he looks at it and doubts it. What doubt? How much do you imagine your nephew has wished or to give him the belongings of his father (Skarsgard), including the alleged pistol hitler committed suicide with? The moment, the viewer repairs again, is significantly fed up. Aren’t you, likewise, thinking Earskell can envise the young man’s naivety? Of course. When he gives her the box, she says, “I don’t like guns, but he wanted you to have it.” He thanks you and says it’s the best gift you’ve ever been given. The gift will be decisive in your life.

History also handles the idea of justice through the action of forgiving or not. Lenora (Eliza Scalen) is a forgiving victim. He acknowledges that his father may have had something to do with his mother’s death. But she feels “returning” as a woman and person through forgiveness. If he were alive – as he thinks – he would like to meet his father. Arvin, for his part, still sees himself as an offended without atonement. Remember that you do not want to forgive for now the excessive sacrifice of the parent. The act of forgiveness is not a constant, but an intermittency in an account also about vengeance to a lesser extent and, without a doubt, about power relations.

With regard to power relations, both dominance (institutionalized political power) and influence (indirect and unstructured power) matter in The Devil at all times. Although you don’t seek or want to be charismatic at all. Rather, it is intended and manages to exercise domination with its alibi of legitimacy. Now, they could disturb the characterization extremes of the Lozano preachers: if you are not a murderer, you are cynical to no more power. Will the years have to pass for a respectable evangelist to have been forgiven – to have them – horrendous sins of youth? In this regard, the characters of Roy Laferty (Harry Melling) and Teagardin (Robert Pattinson) are exorbitances of the story. There are other characters, who aspire to an unstoppable mastery of manipulation and abuse. But they ride in their car who, while still being a good person, has already lost their innocence.

Based on Donald Ray Pollock’s novel of the same name, published in 2011, Antonio Campos’ film adaptation Of The Devil at All Hours, narrated by Ray Pollock himself, deserves to be easily summed up as a story about harmonious coexistence by deprivation. Paul Auster would say: “Because if things can be rescued from the edge of absence, there is a possibility of returning them to men by doing so.” This means that the possibility of hope is believed. But an inclusive hope, without the delusions of certain cultural beliefs.