The rookie pelotero who bewred the MLB

When the Major League Baseball World Series begins on Tuesday, October 20, no other ballter will have had more headlines and chronicles in the postseason than Randy Arozarena, the charismatic Cuban left fielder of the Tampa Bay Rays, whose relevant performance in the American League Championship Series against the Houston Astros led him to the conquest of Most Valuable Player (JMV).

Upon winning the coveted award, Mantua-born player Pinar del Río became the first position rookie to win the WYD in a Championship Series or World Series in the entire history of MLB, wherefore three pitchers had previously won, one of which was also Cuban Liván Hernández in the World Series won by the Marlins in 1997.

Arozarena batted for a 325 win, hit four home runs, and had a PAHO of 1,152 in all seven Championship Series games. His home run in the first inning of Game 7 to bring two runs to the plate marked an advantage the Rays never lost in the rest of the challenge. That was the number 7 home run of the Cuban midfielder in the postseason, a record number for rookie player in those instances that broke former goalkeeper Evan Longoria’s 6th with rays themselves in 2008.

Upon being able to play in the World Series, Arozarena will have the opportunity to continue making MLB postseason history, as he has a draw with Yuli Gurriel in number of hits (21 with the Astros in 2017) and is just one away from tying with Derek Jeter, who gave 22 with the Yankees in 1996. Clearer: the Cuban will have at least four games to connect two hits and surpass New York’s legendary short field.

Randy Arozarena’s metheric major league ascent (Arrozarena in Cuba) seems to come out of an enchanted tale, but it really is a story of personal self-improvement, sacrifice and iron will. Just five years ago, despite being one of the most outstanding players in the Pinar del Río team in the 2014–2015 season, Arrozarena was left out of the Caribbean Series team, which was a blow and a sign for the young man. From now on he wouldn’t play in his country anymore. Orphaned as a father since 2014, he made the decision to emigrate as outside to help his career and family. 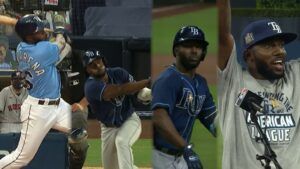 Having successfully dabbled in Mexican baseball, Arozarena made his debut for the St. Louis Cardinals in the 2019 season; but what would definitely change his fate would be the transaction in which he was involved in January of this year to lack the Tampa Bay Rays.

However, a new skirmish had to face the Cuban pelotero. Having impressed in spring training and been ready to start the season with the Rays, the Covid-19 ordered him to miss a good part of the campaign. But instead of lamenting, he used the tymnpo to prepare and gain in muscle mass. When he finally reported to the team he was more than ready. And since August 30 he started playing in the regular season, he hasn’t stopped batting and marveling at the baseball world. Will he continue to make history during the World Series? That’s what your countrymen expect.