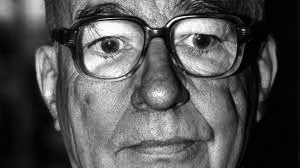 Together with Friedrich Durrenmatt and Max Frisch, Kurt Marti (try “Márti”) is one of the great Swiss writers of the second half of the twentieth century. Born in Bern on January 31, 1921, his literary work includes poetry, essays, journalism, memoirs, narratives and biblical exegesis. Doctor Honoris Causa by the Faculty of Theology of Bern, Marti received numerous awards, such as the Grand Literary Prize of the City of Bern, the Kurt Tucholsky Prize for Journalism and the Prize of the Schiller Foundation of Switzerland.

Marti’s childhood and youth coincided with Hitler’s rise to power, the threat of Nazism to Europe and the world, and the outbreak of World War II. Despite their country’s neutrality, the Swiss did not rule out the possibility of aggression, and they prepared to reject it. At the age of twenty, Kurt Marti served as an officer in the mountain troops. “Serving with guns was not a problem for me. We considered it natural to use weapons in case Hitler invaded Switzerland,” Marti would write years later.

He had begun law studies, but in 1942 he decided to form as an evangelical theologian. At the conclusion of the theological studies he was sent as chaplain of prisoners of war to Paris, where he came into contact with existentialist philosophy. Ordained pastor of the Reformed Church, he worked for brief periods in churches in Rohrbach, Leimiswil and Niederlenz. At Nydegg Church in Bern, he was parish priest from 1961 until his retirement in 1983; his work as pastor included the realization of the divine office, the preaching and administration of the sacraments, funeral honors, and administrative tasks.

In 1950 he married Hanni Morgenthaler, his great love and inspirational muse, who supported Marti’s pastoral and literary work, and was his closest collaborator. They had four children, one of whom, Lorenz Marti, is a writer and journalist. Nearly sixty years lasted until Hanni’s death in 2007.

Kurt Marti began writing poems in the late 1950s. With the humor that was characteristic of him, he once remarked, “Instead of having a midlife crisis, I started writing.” His first book was the poem Boulevard Bikini; He was followed in 1959 by Republikanische Gedichte [Republican Poems] and in 1960 Dorfgeschichten [Village Stories].

He published in 1966 Die Schweiz und ihre Schriftsteller – die Schriftsteller und ihre Schweiz [Switzerland and its writers – the writers and their Switzerland], where he analyzed problems and circumstances reflected in the Swiss literature of the time, and in 1967 pink loui – vierzg gedicht ir b’rner umgangssprach [pink loui – forty poems in bern dialect], a book that initiated a renewal of poetry in his dialect in the country. In 1969 his Leichenreden [Duel Farewells], texts related to death and life, came to light, which sparked controversy for the unconventional way in which the author addresses these issues. For example, to the phrase with which funerals always began in his church, “God has wanted it this way”, Marti responds in a poem:

Lord our god
I definitely didn’t want
who likes to.
died in a traffic accident
first, he was too young
second, for his wife a tender husband
third, a funny father to his two children
fourth, a good friend for his friends
fifth, it was full of good ideas
What’s going to happen now without him?
Without him, what will become of his wife?
Who’s going to play with the kids?
Who replaces a friend?
Who will have the new ideas?
to lord our god
definitely didn’t like it
that some of you have thought about
that he wanted such a thing
in the name of the one who revived the dead
in the name of the one who rose from the dead:
we protest against the death of gustav e. lips1

St Brigid, mystique and theolog, says to the Lord in his prayer: “Make my soul understand that not everything that happens is by your will, and that nothing you allow is without consolation.” Arduous task, own for connoisseurs, to define the boundary between what God wants and what he allows. Theologian and poet, Marti projects in his Leichenreden the image of the merciful God who cannot desire the unhappiness of his children. And in the face of death he chooses to celebrate life:

Some of Kurt Marti’s poems have been musicalized as songs for the worship of evangelical churches. Marti wrote in 1989 the texts for the Oratory for the Planet of Life (Sunt lacrimae rerum, with music by Daniel Glaus):

Perhaps: a still center in the hurricane of matter.
And – in the still center of matter the wisdom of God.
And wisdom had a vision: somewhere in the mighty universe
a small oasis of life,
where conversation and love flourish.

After his retirement in 1983, Marti was able to work as a full-time writer. In those years appeared, among many others, the books Nachtgeschichten [Night Stories, 1990], O Gott! Essays und Meditationen [Oh God! Essays and Meditations, 1995] and its translation and exegesis of Ecclesiastes, with the subtitle “Wisdom in the Midst of Globalization” (2002).

Marti worked as an important journalist throughout his life, and from 1964 to 2007 wrote the column “Notes and Details” for Reformatio magazine. In his journalistic and literary works he took a stand on important issues of his historical moment, and participated in movements for peace, disarmament, support for the most disadvantaged and the countries of the Third World.

On 11 February 2017, at the age of ninety-six, he died in Bern, Kurt Marti. Gottfried Locher of the League of Evangelical Churches of Switzerland said of him: “He dedicated his strength to those who were not heard. To them he lent his voice, and what a voice: Marti spoke in such a way that he could not fail to hear it. And he wrote in such a way that his texts are still young: close to life and full of color, but also precise, and theological in the best sense. Marti narrated life and yet spoke of God. His words have taken root in many of us.” Ω

1 Translation of the poems by Olga Sánchez Guevara.

Quevedo according to Fina García Marruz

FROM THE BIBLE-Disease, Healing and Miracles II

Certainly, healings support the doctrine set forth by the Master. Thus, when he heals the servant of the Roman Centurion, the universality of salvation that reaches even the heathen is evident (Mt 8:13; Acts 10, […]

The American writer and journalist Ambrose Bierce (1842–1914) is the author of the Devil’s Dictionary. From this text, very ironic, with raw humor against everything and against all, and that sometimes borders on both the […]

Under the theme “Young people, faith and vocational discernment”, took place in Vatican City, from 13 to 28 October 2018, the Synod dedicated to young people. […]