“The man of God first.” This was one of the expressions that were heard in the homily of the funeral mass of Mons. José Siro González Bacallao, sixth bishop of the diocese of Pinar del Río, last Monday, July 19, 2021, when the people of Pinar del Río together with His presbytery and brothers in the episcopate gave thanks to God for the life of this good shepherd who was leaving for the House of the Father.

I am very grateful for the opportunity to share my experience with him with the readers of this space, because it is as if they asked me to talk about the wise grandfather who commands respect, but at the same time inspires a lot of affection. Talking about him is easy, not only because the words that describe him abound, but because his works speak more.

The Lord chose this country man at the age of twelve, amid the beauty of the Candelaria mountains, in the eastern region of the diocese. He could not imagine the path that he would travel, when accompanied by the Franciscan Mario Cuende he made his first trip to Havana to enter the San Carlos y San Ambrosio Seminary. The following year, he would go on to El Buen Pastor Seminary, where he completed his studies to be ordained on February 28, 1945.

His life as a priest was marked by one of the most difficult stages for the Church in Cuba. Bishop Siro, together with Father Claudio Ojea, were the only priests who served the western and central areas of the diocese after the exodus of priests and nuns beginning in 1960.

For twenty-two years he was the parish priest of San Juan Bautista, in the tobacco zone of San Juan y Martínez; Of these, seven years were spent working in the fields, helping his friend Pancho Rabelo, who had a farm near the parish. They could find him there from Monday to Friday, for Saturday and Sunday to dedicate them to the few pastoral tasks that the government allowed the Church to develop.

Bishop Jaime Ortega appointed him parish priest of the cathedral in 1979 and on May 16, 1982, St. John Paul II called him to be pastor of the flock of the province.

Amid great difficulties and confrontations, Bishop Siro led this church, but it was always clear to him that his cause was God’s, and with Him was his only commitment.

I met him as a teenager, when I began to participate in the Nuestra Señora de la Caridad parish, in the city of Pinar del Río, when his pastor was Father Manolo de Céspedes, current bishop of Matanzas, another shepherd with the smell of sheep. Bishop Siro used to celebrate the evening Eucharist on September 8, although he also visited the community on other occasions to administer the sacrament of confirmation, or kneel on the last bench on Good Friday when he visited the monument of the parishes of the city, to name a few examples.

My mother knew him as “Father Siro” from his time in the cathedral, so there was a special closeness in the background that increased as I became ecclesially engaged. We young people knew that we could find in him the availability to participate in everything that occurred to us, whether it was a Young Easter in the country, or to “pass” by the cathedral when we held the Diocesan Youth Ministry Assembly or the Summer Coexistence. , where the closing Eucharist presided over us and gave us his blessing. 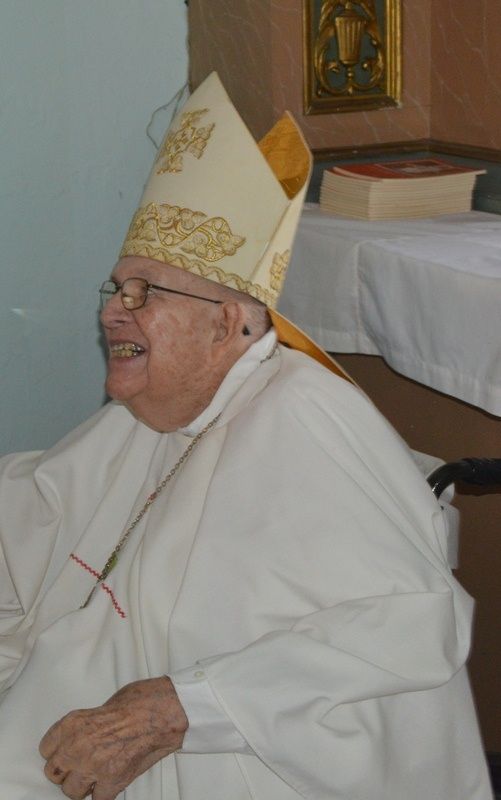 His office in the bishopric was like an extension of the Diocesan Library. Every day he spent long hours behind the beautiful bureau that protruded next to the small desk where Florita Prieto, his secretary for many years, accompanied him on work days; Years later, Rosa Amelia Vento became his secretary, and a relationship emerged between them that lasted until his last days. There his Pastoral Letters, the reports and other writings of him were born; but you had no qualms if you needed to ask him something, because no matter what he was doing, he would get up nimbly to sit in the armchairs in the parlor or the hallway and listen to whatever you wanted to ask him. Then, with firmness and serenity, you received advice full of wisdom.

One of the moments that most come to the fore in the memory are the after-meals in any meeting or in the Diocesan Pastoral Councils where, both the clergy and the religious and those responsible for commissions, we met twice a year, in San Cristóbal or in the old house of the Daughters of Charity, with the purpose of reviewing the life of the diocese and updating it to continue walking with the rest of the pilgrim Church in Cuba. Priests closest in age would gather at the same table around him, and enjoying a cigar, they passed the time between laughter and anecdotes from the past. The rest of us watched them and savored the scene.

You could also find him sitting on his stool in the courtyard of the bishopric, with his seat leaning against a column of the carpentry, enjoying the cool of the patio, talking with Chicho, Enrique, Luis or any worker who passed by; or watching the image restoration brigade work next door; or sitting in the courtyard of the Diocesan House during the first remodeling. There he spent the afternoons, in the fresco of the hall, talking with God about so many things.

With great efforts, he managed to get some religious communities to open houses in the diocese to support the evangelizing mission. With the same effort, he collected 118,700 petition signatures among the people of Pinar del Río, to present it to Pope John Paul II, asking him to fly over the sky of our diocese when he arrived in Cuba in January 1998, since it would be the only one where he would not pass in the days of your visit. The Holy Father accepted, and the people of Pinar del Río were there on the rooftops and in the parks, greeting the papal plane with mirrors, flags and ringing of bells.

In November 2006, Pope Benedict XVI accepted his resignation at the age of seventy-six. In one of his last homilies with the bishopric workers he told us that he was moving to Mantua, and to the people who asked him why he was going so far, he told them that if they really wanted to see him, to go there. Perhaps he did not imagine that so many people would travel to the tip of the diocese to spend time with him. That is where the San José Farm was born with its guajiro museum, the fountain that Mons. Meurice gave it and that number of animals and plants that gave life to the simple little house on the way out of town. There was his mount, the one he used in San Juan when he worked in the fields, his paintings recreating the working day in a tobacco groove and his wonderful collection of dolls, such as the gorilla that when hearing his voice began to dance and had received as a gift on one of his trips.

In Mantua he found new friends, a community that welcomed him as if it were guarding one of the great treasures of the Pinar del Rio Church. There he received the image of the Virgin of Charity on the national pilgrimage for the 400 years since her discovery. Later, under the care of Fr. Juan Lázaro Vélez (P. Pacheco), he lived together until the day of his departure; in Mantua, as he always wanted.

This July 19 was one of those days that we define as “mixed feelings”. We said goodbye to a man with many defects, who made mistakes during his life, but who, like all the saints we know, had more than good works and good decisions. That is why an old man with difficulty walking, walked the town of Mantua, from end to end, to bring him the cigars that he made for him, and the community of San Juan waited in the park for the funeral procession to pass to applaud the life of this man who was walking its streets for the last time, and the news of his death went viral on social networks where immediately publications with photos and memories of those who knew him began to appear, or simply “I like it”, “It saddens me”, “I care ”, The sharing of the publication or the simplest and most heartfelt comments.

He left us generosity. Money that he received for one hand, he would go out for the other to help someone.

We inherit his firmness and courage, his testimony of dedication and commitment to God; But above all he taught us love for Cuba, like the land where we are born and which we have to love if we say we love God, and he taught us to love the Church, to feel with her, to defend her from the storms; because she will be wrong and many will judge and criticize her, but above all, she is us; and as children and members of her, we have to take care of her and each one assume the responsibility that we have with her, without waiting for others to do what we have to do.

While the coffin was placed in the Pantheon of the Bishops in the cemetery of the city of Pinar del Río, his affectionate way of calling us all came to my mind: “Little children”, and together with that I thanked God for faith and gift of resurrection, because lives like this remind us that death is not the end, that there is a victory behind this step.

Let us walk towards the encounter with God, leaving traces that allow us to express like Saint Paul in his letter to the Corinthians: “Where is your victory, oh death?” (1 Cor 15.55). “Death has been conquered by love.”