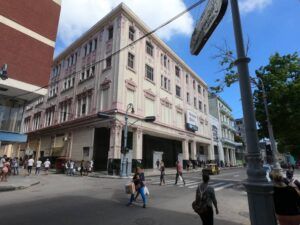 While read in the Granma newspaper on 7 August, Madeleine Sautié’s work entitled “Acatar health measures has to be the rule”,1 a call to prudence and the need to end indolence to conclude with the pandemic and then, in the same newspaper, the summary of the meeting of the Temporary Working Group for the Detection and Control of the New Coronavirus , chaired by Prime Minister Manuel Marrero Cruz, where an analysis of the state of the epidemic was being made in Cuba, and an announcement was made a group of lukewarm measures to counteract the existing state of business, at that very moment the star news began to broadcast in the voice of President Miguel Díaz-Canel Bermúdez something more forceful and logical, the return of Havana to the indigenous transmission phase ,2 news that surprised few as expected it was.

Neither of Madeleine Sautié’s work, nor of what was expressed by Prime Minister Manuel Marrero Cruz, nor of the arguments given by President Miguel Díaz-Canel would take away a single word. They correctly expressed what was due to what they wanted to convey, but all addressed the problem, directly or indirectly, from a single angle, the impact that social indiscipline has had on the epidemiological state of the capital. It is true that this is the most connotation factor in the transmissibility of the virus, but the current state of the Covid-19 in Havana “is a child that has many parents”, aiming in one direction would target a single culprit and that would not be objective. Making a fair assessment of the reality we are experiencing today in Havana requires an in-depth analysis of the management that has been had of multiple socio-historical variables, that is the only way to understand the phenomenon and its implications in the reality that it is going through.

Social indiscipline is the only daughter and heir to carelessness, this concern has been expressed since the first day of the pandemic, even by our means, without plugging. It is the result of having lived a long time uncontrolled, mainly inside the Habaneros neighborhoods. Today the products of poor planting are being collected. What have many been doing during these stages of epidemic? The same thing they’ve been doing for years without any measure of containment.

The proliferation of coleros and resellers is also not a matter that emerged in coVID-19 times, we also warned from an early date of the danger they involved to the population and the transmission of the pandemic. We said then that it would be sharpened by the ineffectiveness that a card could have for purchase on the commercial network, which was transferable. Without an adequate control mechanism, nor a population address to the areas of sale in a regulated manner, by wineries, by People’s Council or per block, the measure would be inefficient. The three manifestations seen so far have a high degree of association with the illegal migration variable, I do not want to show that it is only them, because it is not, but that is one of the sources of basic income of a large number of this demographic component, especially women. All this phenomenology already existed in the cuban capital for many years before Covid-19, only now it has been further visualized and has jeopardized the health, food security and work of many.

The warehouse houses and hoarders did not emerge overnight, the people have been pointing at them and have been questioning the sources of origin of the goods they sell a long time ago, which are not just food items, personal toilets or changing rooms, where do the hardware, plumbing and construction that the famous merolicos offer on the portals of the main public roads come from? Many un licensed and others licensed to perform different activities have been imposing abusive prices in the face of the Cuban’s need. Behind these demonstrations is also a long history of impunity, uncontrollability and corruption.

The housing issue and hygienic status in the Habaneros neighborhoods is complex, today large sections of the Cuban family have noticed that they share the same space, but they find it difficult to live together for an extended period of time. The dynamics of the times lived have operated to break family integration. There has been evidence of poor socio-historical knowledge and management that has attacked effective operability on the basis of the eradication of the epidemiological situation. Operating in the city at the level of the People’s Council has been a big mistake, in the capital it is necessary to go down to the fundamental cell of identity formation, the neighborhood. In Centro Habana almost daily there were cases of contagion, the whole territory is considered as a single event, but from the moment the floodlights of the neighborhoods of Los Sitios and Colón were controlled, the complex epidemiological situation was eradicated.

Another situation to be analyzed is what happened in the present provinces Artemis and Mayabeque, what are these territories really? The Administrative Political Division has turned them into provinces for better economic and political management, but from a historical point of view they are the hinterland3 of the Havana megalopolis, they are part of what local history considers to be “The Great Havana”. They maintain an indissoluble social relationship with the capital, there are countless family, labor, economic links that make it impossible not to interact between the three current provinces. For this reason, an infected Mariel, resides in the municipality Diez de Octubre and generates a family contact in the municipality La Lisa and the latter, in turn, works in Centro Habana. The case may seem hypothetical, but it’s real. The catalyst that activated the chain of contagions in the territory was a feast, an act of social indiscipline, without a doubt, but who was the carrier agent of SARS-CoV-2, if there were no cases in the province? It was mobility and interaction between territories.

When Phase-1 was declared for the capital, because the five basic indicators for making the decision showed favorable states, indicators, certainly misleading by their calculation method, the decision did not appreciate the consideration that any statistical process indicates a trend, but does not ensure the success of a task. This worked as a shot of grace for the capital. Transport was activated and with it mobility, despite there are still cases of positivity and a high degree of asymptomatic contagions, in this way the risk factor increased. What Havana is experiencing today, without a regrowthe, is the reactivation of an uncontrolled and stimulated epidemiological chain, finding fertile ground for its transmission, in a population that showed no traits of good discipline or efficient control.

We are already in the indigenous transmission phase again and the question of concern to all is what will happen from now on? We already have the experience, incurring the same mistakes would be difficult. If the necessary tools are available to comply with and enforce the provisions, the situation must be improved, but there are population sectors that continue to force us to continue swimming in the same waters at convenience. The author of these lines asked himself the same question, as he walked down Monte Street today on his way to his work and observed that nothing had changed in it in this regard. While it is true that we were pushed and stumbled, it is also wise to rectify, we are now at that point. Enforcing measures drastically is an imperative to end agony, otherwise we will continue eternally with our faces covered. Ω

Did we arrive or were we pushed?

Why is it that we’re still in pandemic?