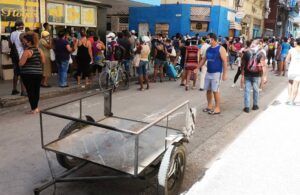 Returning to the subject of Covid–19 and its presence in Cuba might seem recurrent and tedious, but the matter has no end. The media constantly monitors the evolution of the pandemic. Social media is active and flooded with real and fake news. Everyone approaches the matter according to their own visions and interests. Specifically, reality is only one, SARS-CoV-2 continues among Cubans as the first day, despite the massive efforts of public health entities, measures to try to cut off the transmission of the disease and the contribution of the majority of the population.

Something catches the eye; if everything already indicated that the epidemic was under control, how was it possible for us to go back to current levels? All accusing fingers point to social indiscipline and measures are directed towards it. In a contradictory way and in the face of an approach to the fair situation, including all the variables and factors involved, the result of the analysis would not be so simple. The current state of Covid–19 in the country is the result of multiple causes, some historical, others of management, economic and of course, those of social impact, but… “Blame, damn guilt, ” is not one-way; these sludges are consequences of many waters.

There is no society that operates without having its three basic variables in gear: economic, political and social, if one of them fails, the others are unfit. Therefore, thinking or making it appear that the current state of the pandemic is a consequence of a single reason is a serious mistake.

It is true that social indiscipline activates propagation, but what has been its historical reason? The abandonment by those responsible for maintaining public order and indolence regarding the maintenance of good standards of social behavior for a long time. A large section of the capital today, the same thing it has been doing smoothly over the course of long years, despite the constant inconvenience and complaints of the public. Resale, cabbages, illicit businesses, prohibited games and a long list of activities have all been livelihoods for them. Who is a majority in these activities? A huge mass of working-age, but unlinked, individuals who are defined as “fighters,” do not work for this society and an abundant population of illegal immigrants. Most are currently on the edge of the economic aspect, living linked to depressed or whipped activities at this stage. They bid to break the consciously established order, that depends on their livelihood and they maintain great mobility within the areas of influx of people. The phenomenon has always been visible and for no one can turn out to be a discovery today.

What influence has the move from Havana to the First Phase had on the current situation? When it was decreed there were still active cases and a high degree of asymptomatic individuals. At that time, despite the arguments expressed and the statistical results shown[1], we thought that moving the capital to that stage “was a push”, and in fact it was, nothing is a coincidence, but it did result. Mobility was activated and with it the possibility of local transmission. The offers for national tourism were plentiful, the beaches opened, many habaneros went to relieve their stress to Varadero, made internships in recreation centers and traveled to areas where they shared with people from other provinces. From within the country he also moved staff to the capital. At that stage you could not pass between provinces, but it happened, provisions were violated and everything indicates that health checks were not very effective.

From there the chain of contagion grew, first became visible in the capital itself, then in its hinterland[2], later in Matanzas, Cardenas and gradually in the rest of the provinces, even in those where control has been most effective, such as the case of Cienfuegos. The curve of the sick, serious, critical and deceased began to grow, and so months of effort and night applause went ashore for health personnel.

The food situation and supplies of household support supplies are critical, circumstances force them out in order to meet basic needs. To achieve something you have to face the risk of contagion even if we think we are protected, the mass of individuals who bid to break order, insufficient supplies and poor organization.

The measures that have been taken help in something, but they are insufficient. Keeping the population at home from seven at night to five in the morning only controls the non-existence of night activities in bars, restaurants and nightclubs, attended only by those who have the possibility of paying for them, who are not the majority of the working population and some who like to “average”[3] in the corners , but if the situation continues to be the same as always, regulation is in effective.

Inside the neighborhoods everything remains identical, low and even absent citizen control, behind many doors the resale is maintained, the agribusiness and markets remain unsused, people on the street, drum taps are frequently heard and even children dance in them, so it will be very difficult to reverse the stage. I will not stop for a second this time to refer to the housing and hygienic situation that also negatively contributes to the epidemiological state, of that wheat has already been quite ground and flour has been little.

Given the state of play, other measures are likely to occur, will they continue to target the same target?

In the face of the question raised as a subject, the answer can be broad, because there is a virus that can be fatal, despite many years that have elapsed social lastres, inappropriate habits and behaviors have been encouraged and neglected for proper citizen coexistence, there have been unscathed management in the confrontation with the pandemic, because of the unmet needs of the Cuban family , because unfortunately the cultural level has been lowering and social indiscipline is almost an endemic evil, the list of causes can be long. The goal must be to work rigorously, authority and responsibility in every way, the rush to defeat SARS-CoV-2 has shown that it can be nefarious. If we all do what we all do well, the time will come when we will discover our faces, the nightmare will be a memory and the fault will only be a guideline that indicates what should be changed before the next contests.

[1] The five statistical indicators assumed as health patterns so that the move from one territory from one phase to another can be performed are: Incidence Rate, Reproductive Index, Active Cases, Number of Positive Cases with Known Source of Infection in the Last 15 Days, and Local Transmission Events.

[2] Hinterland: Word from the German language widely used in local history studies. Alluding to a historical area of land influence or the existing one around a city, it is always a tax on logistics infrastructure for a capital city.

[3] Average: Popular expression in Cuba indicating wasting time, wandering aimlessly, stopping for some time in a place to accompany someone.

A pandemic transits the orb (1)

A pandemic transits the orb (7)

Today and Tomorrow of a Pandemic (9)

A pandemic transits the orb (2)