A poster proposal uniquely sets out the contribution of a group of Cuban designers against the Coronavirus. During this time of physical isolation, these creators have intervened and reinterpreted well-known Cuban film posters to convey a message of public good and prevent the spread of Covid 19.

Grouped in the project “Film Posters in Covid’s Time”, the works can be seen, so far, on different digital platforms, where they have been very well received. Its authors, based on and off the island, converge on the desire to rescue that graphic memory that captures the best of Cuban signage of all time to make it known to the youngest.

Iván Alejandro Batista Cadalzo, designer of the archdiocesan magazine Palabra Nueva, was one of the first to join this initiative, because he worked individually before on the concept that inspires it. With the desire that his creation “hopefully goes for more”, we take advantage of the still current quarantine to talk to him about his participation in this project. 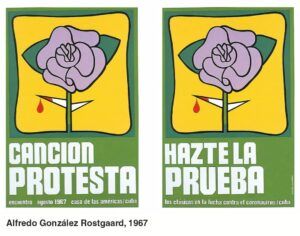 How is this idea born and when do you join it? Who, besides you, joined?

“Annick Woungly, a Cuban designer based in Switzerland and coordinator of the site “Cuban Designers for the World”, created a project called “Film Posters in Times of Coronavirus”; she is, fairly, the one who begins to shape this initiative. When I visit the site and see its intention, I agree with it, as I had already made two adaptations: that of Alfredo Rostgaard’s protest song poster and Rafael Morante’s Cinemateca de Cuba, both original productions of the sixties. Almost in unisono were designers such as Javier Gonzáles Borbolla, Alejo Romero, Kendrick Martínez, among others. 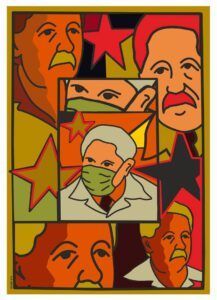 I have worked this series, I have more than fifteen adaptations and it has been very stimulating to see the acceptance they have had; people identify with them, they replicate them. So if they get the message, then the posters truly fulfill their social function.

“Not only has this series been worked on, there have been many posters with the same function, in which other designers have participated, among them Richard Velázquez, Walter Díaz Moreno, Yaimel López and Claudio Sotolongo.”

Why the need to return to the Cuban film poster? What attracts you, in particular, to authors such as Eduardo Muñoz Bachs or Raúl Martínez, for example? What are you interested in returning from these artists for the design work you do?

“One of the values of this initiative is to rescue that graphic memory that captures the best of Cuban signage of all time, so that the youngest who did not live it – because they are works of the sixties, seventies and eighties fundamentally – enjoyed them in their original version and could also appreciate the creative work of adapting to this epidemic situation. It is also a tribute to its creators, references of Cuban graphic design and of whom, those of us who comb gray hair today, keep a very pleasant memory. Some of them gave us their experiences and we were able to learn from their work and drink from their human quality.

“All these creators were involved in creative magical realism, the solutions were wonderful, with high visual impact, with very novel and experimental graphic rendering resources for the time, in which there were no computers or software for the design work. Many of them achieved a characteristic style, such as Eduardo Muñoz Bachs and Raúl Martínez, inspired by Polish and American artistic currents. These styles have been taken up as a tribute to them and by the concern to experience and mix those forms of representation with elements of mine in the illustration.”

How many works count within the proposal “Cuban designers against the coronavirus”? What’s next?

“The project has about forty works; although I haven’t counted them rigorously, the figure’s out there. I have already stopped in that line of work because as I have said on other occasions, crowding or abusing are not good words and sympathy cannot be transformed into monotony and rejection. As long as there is some interesting solution left, it is valid, but without excesses. Now it remains to continue working with graphical solutions that contain messages aimed at not neglecting us and maintaining caution, even if the balance of the behavior of the disease in Cuba is favorable.”

Do you firmly believe that this type of work will help people gain discipline and responsibility for risky situations? Do you think I can reach a broad audience?

“In the series of adaptation of the film posters were not chosen the works at random, it worked mainly on those that the public could remember, posters of films such as Se permuta, La chimera de oro, Kisses stolen, Strawberry and chocolate, Plaff, Clandestinos, Lucia… In other cases they were documentaries of significance such as Hanoi Tuesday 13, Neighbors, The Family, and also ephemeris or events remembered as that of the Protest Song. The quality of these materials at the time aroused an effect of sympathy with the public; today, some of that audience is reunion with these graphic gems (it should be remembered that older people are the most vulnerable to the disease). On the other hand, the adaptation that was made to them produced an effect of hilarity and amazement when seeing the result, we know well from the comments on social networks and on the sites where they are posted. People have welcomed the initiative, seized the messages, made them their own, replicated them on the Internet and that is the expected result: to raise awareness, educate and prevent with the Creole grace that characterizes us and at the same time with the social responsibility that these communication actions carry.” 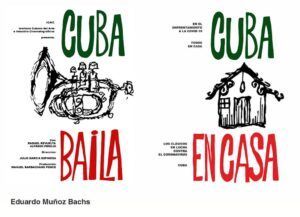 So far we enjoy the works in digital support, a scenario that is not accessible to many Cubans, have they not thought about printing and exposing them in the future?

“I think we will have to make an exhibition or several where the contribution of many design professionals in the fight to the pandemic is. In this way, everyone who does not have the possibility to connect to the internet, which are not few, will be able to enjoy it. But difficult times are coming and any idea of this kind requires resources. We will see how to achieve it and be left for posterity.”

To what extent have these months of “cloistering” been beneficial to your work as a designer? Do you think you needed this time for your creative work?

“Busy all the time in the routine that takes care, management, management and logistics of digital printing, one is neglected to create, or at least moves to the background. Word New becomes an oasis within all this because I have the satisfaction and duty to make it bimonthly and take care of its design and realization. These sabbatical months – which I have devoted to my creative concerns – I have taken advantage of them very well. Creation has gone hand in hand with the work of persuading, educating, collaborating (all translated into posters), so that graphic design contributes together with all the mechanisms of the country to get out of this terrible situation. Necessarily, for the moment I have left the impression and gladly dedicated myself to design from home. I divulge my work by taking advantage of the internet.”

Five regrets in times of crisis