When I discovered her, sitting on Grandma’s lap, she was traveling on a route 20 “Via Hospital”. It was a gigantic play. I had a vast staircase and from above, a woman-statue looked at me with her arms outstretched. “What is that?” I asked pointing to the property. “The University,” he explained, “is the school where big boys study.” “Grandma, I want to study there!” Then he sighed deep and, with the delicacy that only grandmothers possess, he said, “Well, well, that’s a long way to go.”
The history and performance of the University of Havana are well known. Since its founding in 1902, at the top of the Aróstegui Hill, illustrious men and women have been cultivated for all times: thinkers, writers, historians and researchers, who have given the institution a look inside and outside the country. 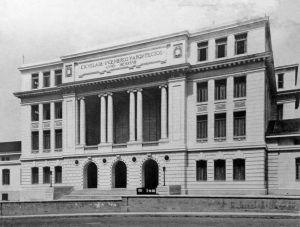 For this reason it is frequently visited by presidents, pontiffs, tourists…, who travel a well-thought-out itinerary, which allows them to enjoy the undeniable beauty of the buildings adorned for that purpose. The staircase, its luminaires, the Aula Magna and the properties surrounding Ignacio Agramonte square have been restored.
However, despite the undisputed hierarchy of visitors, despite the significant events that have taken place and take place on the hill, and contrary to what may be assumed, the University of Havana is not the showcase of a museum. It is much more: it is the forge, also anvil and hammer, of the looming intellectuals.
It has excellent students, with a great interest in overcoming each other, who are backed by generous family support, not without great sacrifices, which allows them to use modern, essential and expensive work tools: computers, mobile phones, laptops, scientific calculators, which expand the educational possibilities accessible only with such equipment.
On the other hand, although it exhibits a high level of qualification, the cloister is insufficient due to the meager salaries and is completed with hired teachers, retirees-contracted, consulting professors (also in the category of teachers-retirees-hired), recent graduates and assistant students.
However, the institution’s nerve problems are not in excessive family spending or teachers’ pay situation, but in other areas that have little or nothing to do with the above-mentioned groups, but directly violate their performance.
As its transcendental role is to educate, the high school should be able to ensure that the instruction of young people is carried out in an attractive, hygienic and safe environment in its entirety. Herein lies the biggest problem.
Today the institution is unable to meet these demands because the inadequacy of cleaning staff is critical, a situation that undermines the neatness required by the minimum hygienic-health standards that correspond to a school. In addition, drinking water or electrical fluid supplies are not stable; and the construction and maintenance brigades, perhaps because they do not have the workforce covered, exhibit slowness and lack of planning in their implementation.
These circumstances bring with them situations that injure the correct performance of the faculties and their dependencies. Numerous cases that show such anomalies could be mentioned, but we only provide two examples for being the most disturbing.

The Faculty of Physics
Behind alma mater, deep down from the University of Havana, is the current Faculty of Physics, where before 1964 the School of Engineers and Architects was located. Here he studied the young Catholic and president of the FEU José Antonio Jesús del Carmen Echeverría Bianchi, who was assassinated on March 13, 1957.
The building consists of four floors and two side naves, like wings deployed, on both sides of the main body. Just over eleven years ago, restoration work began.
According to the head of work, who was interviewed by the author of the article on the morning of June 29 last year, reconstruction work will be completed by the end of 2018.
If it materialized, as the leader said, then the work would be completed twelve years after reconstruction began. This announces that the Faculty of Physics could begin its functions entirely at the end of the working day of 31 December.
At the beginning of the school year (2017-2018) floors three and four were inaugurated, the repair of which took a decade. Applying a simple rule of three can be assumed that, if five years of work are needed for each plant, then the restoration of the first two floors plus that of the two side naves will consume another twenty years. 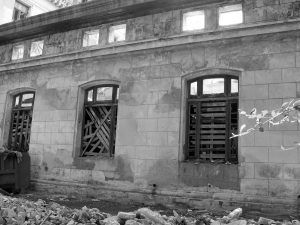 With the parsimonious execution shown so far, and according to the previous estimate, the Faculty of Physics could be inaugurated in its entirety around 2036. It looks amazing. Someone might speculate that it’s an unwise watticinium, but unfortunately that’s what the numbers indicate.
It should be clarified that for each member of the construction brigade (considering forty-four hours per week of work, months of four weeks and years of eleven months), twelve years of work amount to about twenty-three thousand two hundred and thirty-two hours of individual work, necessary to repair a four-story building and two side naves.
Following this line of reasoning, it is feasible to assume that, if the brigade were made up of only fifteen members, the total hours of work carried out in those twelve years would reach the figure of three hundred and forty-eight thousand four hundred and eighty hours of work, considerable amount, if one does not lose sight of what the initial objective of the task was.
On the other hand, assuming that the salary of each worker was five hundred and ninety-five pesos-cup1 on average, then the total cost, only for accrued wages, that the University (or the State), should pay off this construction brigade (consisting of fifteen people) would reach the figure of one million two hundred and eighty-five thousand two hundred pesos-cup (1 285 200.00 pesos-cup).
This amount corresponds only to the work carried out; without considering the monetary expenditure associated with building materials, the transport of debris and aggregates, the wear and tear of tools, electricity, fuel…
It should be noted that the calculation has included the month of vacation, in which no work is worked, but is charged. Decorum omits the deduction of the amount of money needed to solve the work of this imaginary brigade for thirty years.
However, despite the long period of work and expenditure, an alarming circumstance has taken place: a few months after the above partial opening, constructive problems arose in the inaugurated sector: failures in roof watertightness, falls of repelle and other breakouts that, fortunately, did not cause injury.
The quality of the “concluded” works has been so poor that many premises and classrooms on the opened floors have had to be closed to repair what has been repaired.
It is right to remember that in Cuba major works have been carried out in a shorter time, two or three years at most. A maximum period of four years would have been an adequate period of time to complete the total recovery of the Physics building.
If this consideration were correct, then the amount of eight hundred and fifty-six thousand eight hundred pesos-cup (856 800.00 pesos-cup) would have been wasted in eight years of idle work.
There’s little matter what the motives matter. 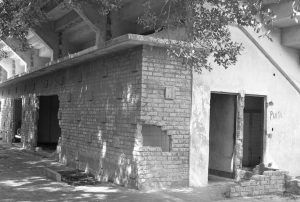 te Juan Abrantes Fernández
The other example to be discussed is separated from the Faculty of Physics by the narrow Ronda Street. There, also at the bottom of the hill, is the university stadium Comandante Juan Abrantes, known by the acronym Seder (Service of Physical Education, Sport and Recreation), whose construction works officially began on March 15, 1922 under the decisive push of Julio Antonio Mella, who at the time was the executive secretary of the University Athletic Commission.
During a visit to the sports center, I could see that the football pitch, the race track, as well as the squash court are usable. The same goes for the basketball board (Ramiro Valdés Daussá Multipurpose Room).
Years ago, in addition to the sports mentioned above, in the Seder it was possible to practice numerous specialties including: long jump, obstacle course, judo, wrestling, karate, swimming, fencing, gymnastics, gymnastics and many more. It had a firing range designed for U-caliber pistols and shotguns and included a chess-playing room, where the presence of the Master and several-time Champion of Cuba Eleazar Jiménez was common. It also had lockers, bathrooms and comfortable and clean dressing rooms. A well-stocked café, with prices within reach of student pockets. It’s not like that at the moment. 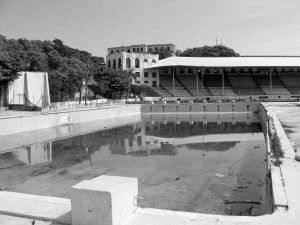 The deterioration exhibited by the entire Seder and the demolition of the pool and its complementary facilities stands out in particular: stands, dressing rooms, showers, lockers, sanitary services.
Pieces of wall, doors, windows (including frames), pond feed turbines, chlorine dosing device, hydraulic installations in their entirety, sanitary cups and even the keys and suppliers of the compulsory shower to be taken before throwing themselves into the pool have disappeared.
Please note that the pool accumulates water only when it rains. The image can see the considerable volume of liquid it stores as a result of recent downsapers. It has been transformed into an imposing breeding ground for mosquitoes and other vectors in one of the most central places in the city.
In addition to rainwater, debris and debris of various origins are piled up in the pond: plastic knobs, sneakers, glass bottles, earth, nylon soaps, branches, brick fragments and concrete.
In what was an attractive place for the practice of various aquatic modalities, abandonment, laziness, also impotence are now perceived. The desidia always leaves deep footprints, like these. The landscape squeals the consciousness of the sensitive observer.
It is probably in time to reverse the situation and the expenses necessary to start the sports field in its entirety, restore it to its original form, return to the Seder what it has lost due to many culprits are not insurmountable.
Perhaps the necessary figure does not exceed eight hundred and fifty-six thousand eight hundred pesos-cup that the author assumes wasted by the inexplicable delay in repairing the Faculty of Physics.
Perhaps the solution is nothing more than to combine wills. Just that one, maybe… The hardest.
God forbid. Ω

Notes
1 According to “Average salary in Cuba… figures and statistics”, in Economics with Ink, special supplement of the Granma newspaper, p. 3, single edition No. 154, Havana, Friday, June 30, 2017. It is declared as a source: National Bureau of Statistics.

For the first time in Cuba, chamber duo Ceskoslovenske Komorní (declared the resident group of diplomatic missions abroad of the Czech Republic and Slovakia for 2018), on the occasion of the celebrations for the Centennial […]

The games of death on the Internet

Today the subject becomes much more complicated. New viral challenges are still emerging that, due to their danger, generate real panic. […]

On November 15th, before the Feast of St. Kitts and the four hundred and ninety-nineth birthdays of Havana, the procession of the image of the patron saint of the City and the Archdiocese took place. […]