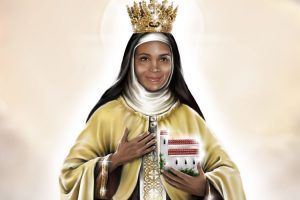 Of the first seven deaconos mentioned in chapter 6 of the book of The Acts of the Apostles, the best known is the protomartir St Stephen. He is followed in fame by the deacon Philip, notable for his fiery and effective preaching, like the one with which he excited the city of Samaria, and which was ratified by the miracles he performed and by the power she showed to have over demons. Philip was a firm believer, so docile to the action of the Holy Spirit that some of his deeds seem fable, like that narrated in chapter 8 of the quoted book. There we are told of an angel of the Lord who gives Philip the order: “Rise up and go south, down the road from Jerusalem to Gaza: it is a deserted path.” Philip obeys promptly, not knowing what he is going to.
On that way to Gaza, he sees a carriage approaching in which sits a big man of stature and black fur. He was “an Ethiopian eunuch, treasure minister and senior official of Candace, the queen of Ethiopia; he had gone on a pilgrimage to Jerusalem and became seated in his carriage, reading to the prophet Isaiah.” Then the Holy Spirit asks Philip to approach the carriage. The deacon realizes that the traveler reads a passage from the prophet Isaiah allusive to the Passion of Christ. He asks the Ethiopian if he understands what he is reading, but he replies, “And how can I understand it, if no one explains it to me?” That said, he invites Philip to get in the carriage and, sitting next to him, clarify the prophet’s text. On the part of this passage, the deacon gives the eunuch the essential truths of the Christian faith.
As he passed through a place where there is plenty of water, the Ethiopian asks Philip to baptize him. Having fulfilled this, the account again acquires glimpses of fantastic: “When they came out of the water, the Spirit of the Lord snatched Philip, and the Ethiopian saw him no more, but he joyfully went on his way. Philip suddenly found himself in Azoto, and in all the cities where he passed he was announcing the Good News, until he arrived in Caesarea.”

In the country of the Nubians
This starting point was appropriate, for otherwise the story of Saint Efigenia would lack a more or less credible context. This context is offered by a tradition according to which the Apostle and Evangelist Matthew, having knowledge of the episode of ethiopian who became a Christian, decided to go to Ethiopia, to find this singular character and devote himself fully to evangelizing the country of the Nubians. Efigenia would be, according to narratives dotted with imagination, the most celebrated converted and collaborator of St Matthew and the first saint of the African continent.
Although the name Efigenia or Ifigenia no longer appears in the santorales, its reputation as a martyr originating in Ethiopia managed to spread on all continents, mainly in geographical areas with black populations. Her devotees venerate her on 21 September, the same day that the Catholic Church celebrates the Apostle and Evangelist Matthew.
Documentary evidence cannot be given from the effective existence of Saint Efigenia, but a very entrenched tradition can be appealed to. It probably happened, in the case of the Ethiopian martyr, what has happened with many other martyr figures of the first centuries of Christianity: that the memory of a remarkable fact such as martyrdom, led tradition to fantasically complete the unknown profiles of the character. We are therefore in the field of apocryphal literature that is distinguished because data gaps fill them with imaginary episodes. Even stripping the character of invented episodes, a real fact remains that is at the base of that fantasy display: the character actually existed.
If we give credit to the tradition that marks Matthew as the evangelizer of Ethiopia, the saint in question must have lived in the first century of the Christian era. It is claimed that Efigenia was the daughter of Ethiopian kings: Egipo and Ifianassa. His father also allegedly adhered to Christianity, but without overcoming his idolatry or his entrenched superstitions. So much so that pagan wizards, promoters of the idolatry religion that Egipo practiced, managed to convince him that the gods would grant him immortality if he, in return, offered them in sacrifice one of his sons.
The condition was very harsh, but the ambitious king longed to retain his vigour and laziness, so, after much insistence on the part of those wizards, Egipo accepted that one of his sons be burned alive. However, when the boy’s cruel immolation had already begun, the king repented and invoked the name of Jesus Christ. Instantly, an angel appeared and saved his son from the flames.

This prodigious intervention renewed his confidence in Christianity and allowed Matthew to continue his preaching; He even approved access to his palace, agreed that the evangelist would continue to indoctrinate the princess and let her collaborate in preaching. Efigenia did so with grace and conviction, to the point of obtaining numerous conversions in the people. She personally always strengthened her love for Jesus Christ.
Things were going aft, but Egipo’s superb and veleous character made it all end in painful drama. A first victim was St Matthew himself: according to the apocryphal accounts we are following, he would have been martyred in the palace of the false convert. His tragic death was caused by the king’s fury, who felt humiliated and offended when Princess Efigenia refused to marry another character of the Ethiopian nobility. Efigenia’s rejection was not due to lack of sympathy or merit from the suitor, but because of the existence of a much stronger and more definitive bond that she had established with Christ when she decided to consecrate her virginity and her whole life to her.
The narratives circulating about the Ethiopian princess present her as a great propa-gadora of Christianity and claim that she managed to gather, in a kind of convent, a good number of consecrated virgins with which she shared her personal purposes; of this, his father was not aware. When he rejected the noble knight that Egipo proposed to him as his husband, he did so so resolutely that the king felt scorned and blamed everything on St Matthew: “that Galilean was not only deranging all the customs and customs of his kingdom, but had also upset his daughter’s head…” He commanded, therefore, to kill the evangelist and to burn down the precinct that Efigenia had made for consecrated virgins.
As for her daughter, now hate and affection were stirring inside. He wanted to punish her severely and at the same time felt to love her with endearing predilection. It was then that the perfidious wizards Arfaxad and Zoroes intervened, who embarked on a campaign aimed at poisoning Egipo’s mind and leading him to vengeance. Taking advantage of his pride and tendency to superstition, he was led to believe that efigeny’s disobedience and his condescension with the propagators of Christianity, he had irritated the gods, therefore there would be catastrophes if he did not sacrifice his daughter. Unable to reason, he made a terrible determination to apply to his daughter the punishment suggested by the wizards.
The young princess, though already a fervent Christian in her heart, still had the status of cateecúmena preparing for baptism. When he was announced his father’s terrible resolve, he asked for a few days; he really wanted time to complete his Christian instruction, receive baptism, and then give his life, not to the false gods but to the one true God.
Sentenced to die at a stake, she was repeatedly prodigiously saved, but those wicked wizards invoked the demon’s powers in order to emerge triumphant. They thought that’s how it was. The true victory was of the Gospel, written and preached by St Matthew, and of Efigenia, the Ethiopian princess she found in Christ and in her message food, strength and joy. Ω

San Nicolás de Bari, a patron saint’s festival with a taste of the village

On the afternoon of this twenty-six November the prestigious Cuban writer Leonardo Padura was officially elevated to membership of the Cuban Academy of Language (ACuL). The entrance ceremony took place in the Aula Magna of […]

Fr. Manuel Vega Orbay, parish priest of St Catherine of Siena, made known this morning that casa Betania opens its doors to all the dioceses of the island. Thanks to the idea of our Archbishop […]

FROM THE BIBLE: Illness, Healing and Miracles I