With a massive procession along the main street and a solemn Mass, presided over by Cardinal Juan de la Caridad García Rodríguez, the members of the community of San Nicolás de Bari, of the Archdiocese of Havana, celebrated their patron saint’s feast.

During Mass the Cardinal encouraged the study of the Bible in each of the homes. The Archbishop of Havana also confirmed in the Christian faith to feel members of the community.

As part of the preparations for the important celebration, the city was blessed and consecrated to the Holy Trinity. Father David Gomez and deacon Sergio also went house by house to bless homes, families, pregnant women and nursing homes. 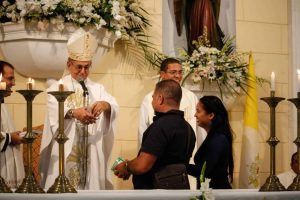 “It is a very positive thing that this community, although it does not have a stable parish priest, has been able to respond and prepare for the event. The procession was also an expression of living and sincere faith. When people see that the parish is encouraged, they join this feeling of the faith of the Catholic Church in Cuba,” said Father David Gómez, who, since his arrival in Cuba from Rome, has been in charge of all the celebrations in this town.

He also commented that parishioners should be educated more in the faith. That is why community members perform a biblical coffee every Saturday after afternoon Mass to study the Word of God.

On the other hand, on December 14th, Pastor Maricela of the Presbyterian Church and Father David will conduct an important biblical and ecumenical meeting in the Catholic temple to strengthen the unity of all Christians.

The town of San Nicolás, with a population of approximately 19 thousand inhabitants, retains its parish as a symbol of identity and a sign of the Church’s closeness to its faithful.