Rainbows in the colorful hair, the nose that lights up like the sun, dressed in pink and yellow, and even looks like a flower. Who is it? And all the children then shout to the sound of the song: ‘Bettyna!'” The previous excerpt, taken from a review published in the press in Almería, Spain, was followed by the question: “Who is Bettyna?”
It is a Cuban, habanera clown, which we can currently find in the art fairs of the Cuba Pavilion, in the Almendares park or in the great annual celebration of the book; also at birthday parties and community project activities. For more than ten years he worked in Spain. One day she decided to return to her country and that decision makes her a happy and made woman today. Bettyna is the stage name of Beatriz (Betty) Padilla Díaz. 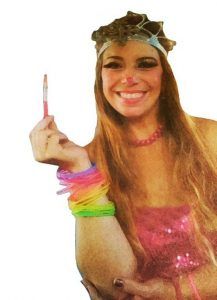 “I’m a clown and makeup player who enjoys what I do. I live by making others laugh, especially the children, for whom I work. In my character I find my professional and personal realization; I need Bettyna, as well as the air to breathe. In times of great stress, I have acted and, as I come down from the stage or the brick or stone where I have climbed, I have experienced a peace so great that, from that moment on, everything flows better.
“I had a hard time finding myself in life. My mom was worried that the years would pass and I wouldn’t define my vocation. I’ve been related to art since I was a little girl. At the age of three I started taking painting lessons at the Napoleonic Museum, participated in singing, dance festivals… I took drama classes, practiced rhythmic gymnastics. At the end of high school, I studied craftsmanship and design. I did internships at a manual arts academy and then I worked as a teacher. I worked in an elementary school here in Vedado, where I taught crafts to children. That was great fun for me.
“That multifaceted training that I had since childhood and I care about my mother, allowed me to work also as a dancer, even outside Cuba. I remember a trip to Mexico, where for the first time I saw a boy making figures with balloons, globoflexia, and I was embossed with his art, to the point that he set an important pattern in my life: that, quite simply, I loved it.
“I later returned to Mexico to work for a year at a dance academy. I returned to Cuba and joined the traditional music company Ignacio Piñeiro. I studied screenplay and artistic direction as well. It was the actor and artistic director Rolando González Miranda, who saw in me an actress with all the conditions to assume a childish character and invited me to work with him in events for children. That’s where Bettyna, the actress, came about. At first it was a butterfly, tender, soft, affectionate. When I was performing with the clowns, I watched some kids come out in fear, cry, not come close. I was like that when I was a little girl, I was afraid of clowns. I wanted to adapt then to the sensitivity of the children and decided to modify makeup and costumes. I filled my character with fantasy and colors. It was Bettyna, the clown.
“After a while I went to Spain, there I did higher education in Early Childhood Education and continued my work as a cheerleader, although I also assumed, from time to time, Bettyna’s character. I visited several countries. In France I was deeply struck by the Place de los Pintores in Paris. I was captivated by that movement of artists with brushes and easels that they painted on canvases and cardboard. There I said: How fantastic it would be to make up children’s faces! I found out what the right paintings were for making fancy makeup, which is what the art of painting on faces is called. I prepared myself, studied a lot… I felt like I’d found myself. That’s how this story of Bettyna, the little clown who paints the children’s faces, began.
“When I understood what my vocation was, I just said, ‘Well, let’s get to work!’ That was in Almería, Andalusia, Spain. But there I felt like I was mutilated. Every year I needed to come and stay in Cuba for a while. I missed the public of Cuba, the Cuban child, for me much more expressive and more communicative. So I was, from Spain to Cuba, for a few years, until one day I came back and decided not to leave anymore. There’s been no missing spaces here to introduce myself to.
“I have cute, interesting anecdotes. I remember a child who wanted me to paint him a feline; I did it, but when he looked in the mirror, he immediately pushed it away and took it off the front. I said, ‘Didn’t you like it?’ At the moment he hugged me tight and said, ‘It’s the cutest gift I’ve ever been given. Today is my birthday and I’m super plush because I’m a tiger.’ I have also had unforgettable experiences with autistic children; they say I have unusual facilities to relate to them and make-up them without any problem.

“When I do, I don’t care about the time. I want the children to be pleased. It’s like giving them the opportunity to become, at least for a little time, the character they’ve wanted or dreamed of being. Usually, they ask me what they want and I, from what they want, I start creating, although I always go a little further.
“I firmly believe that the way you dress, the makeup you wear, your body expression, sets out your work. When I go out as Bettyna, I take great care to present her as beautiful as she can, cared for, educated, affectionate, smiling… I want to bring the best of me to that audience who enjoys and learns with me. In that sense I take care of the vocabulary that I use, the music that, as an invariable rule, will always be childish, and I try to rescue many of those games that children only know today. I feel like traditional values are being lost. Children have to play, be on the move.
“I live from my work, I pay taxes like any artist on his own in this country. However, it’s not all money. I put more love to my work than it can represent financially to me. Besides, and I say that with all property, I charge the minimum of what can be paid for fantasy show or makeup. Anyway, I’ve gone to thousands of birthdays, to communities, hospitals, schools, where I haven’t accepted a single weight for my work.
“Right now I’m playing various roles, I’m a mom, i’m a worker and I do multiple household chores. I’m just asking life to give me health and strength to keep doing what I like. I will never tire of thanking parents, I admire and respect them; of them I’ve learned a lot.
“The most important thing about my life and that one to this work project, are my daughters: Rocío, nine years old and little Ruby, that little creature that was quite a surprise. They both fill my life and everything a woman needs to be happy. Rocío studies chorus and flute, Ruby imitates Bettyna.
“My life with my daughters is great fun. This is the neighborhood house, here come many children to play. So what I do as Bettyna is just the extension of that woman, that mother, that daughter or sister that I am outside the show. And when you live and act the way you are, it’s impossible to be unhappy, whether you’re in Cuba or anywhere else in the world.” Ω

Thumb and ethics of care in Cuba

The one who dreams of us