This Monday the Library of the Padre Félix Varela Cultural Center celebrated its fifth anniversary of the realization, among other activities, of the Third Inter-Library Meeting of the Archdiocese of Havana, organized by the Ecclesial Network of Advanced Studies of Cuba (REEAC).

“We need to unite and combine a common criterion for conducting bibliographic searches in each of the five libraries of the Catholic Church that currently exist in the city for book consultations, the same here at the Cultural Center as in Loyola (Queen), at the Seminary, at the Bioethics Center or in St. John Lateran” Yanais Barzagas Medina, director of the institution, said.

He also referred that this space is a light of knowledge that illuminates in the studies of social and humanistic sciences in the country and allows the intellectual and spiritual growth of people and currently work on the design of a website for the integral management of bibliographic funds, in which you will be able to view the entire existing catalogue , as well as the digital documents that are kept in the center.

As part of the day, Professor Roberto Méndez Martínez gave a master lecture under the title “Eliseo Diego, a Christian poet”. During the presentation, a book autographed by this renowned writer was revealed to Monsignor Francisco Oves, then a Habanero archbishop.

Finally, students from the Institute of Sacred Music and Musical Pedagogy, from Regensburg, Germany, performed a choral interpretation of some of the repertoires that these days exhibit during Sacra Music Week, one of the largest cultural events of the Cuban Church that brings together dozens of renowned Cuban and foreign artists in Havana. 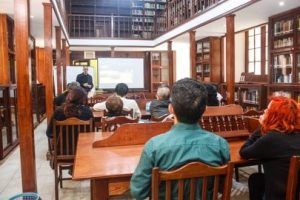 With more than 14 thousand copies, the Padre Félix Varela Cultural Center Library houses books, magazines and serial publications of the Archdiocese of Havana, as well as the private collections of Cardinal Jaime Ortega and the Cuban hall of the former Seminary of San Carlos and San Ambrosio.

The last chords sounded in the VII Week of Sacred Music