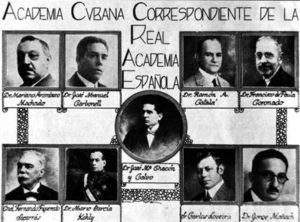 The Cuban Academy of Language this year celebrates nine decades of founding. In 1926 the efforts of Fernando Ortiz and José María Chacón y Calvo resulted, and the Royal Spanish Academy recognized the existence of a corresponding institution in the largest of the Antilles. The dean of Cuban intellectuals of the time: Enrique José Varona was elected as the first director, while his armchairs were occupied by relevant figures of literature, teaching and forum: Antonio Sánchez de Bustamante y Sirvén, Rafael Montoro, Manuel Márquez Sterling and Carlos M. Trelles, among others. Thus began a random, often precarious existence in which the institution survived, sometimes without official headquarters or support, but without interrupting its service in favor of language and national culture. Throughout its existence, illustrious members of the Catholic hierarchy, such as the Archbishops of Havana SE Card, were part of it. Manuel Arteaga and Betancourt and Archbishop Evelio Díaz Cía and more recently Monsignor Carlos Manuel de Céspedes García-Menocal.

Currently, it is part of my life to attend, in my capacity as a member of number, the sessions that are held each month at the University College of San Gerónimo, as well as the cycles of conferences and the events for Language Day in the neighboring Plaza de San Juan de Dios. I often remember, as if it were a dream, the circumstances that allowed me to know the institution in my early youth.

Somewhere I have told how, in the initial days of September 1976, I arrived in Havana, with a license plate for the sociology career, a huge striped cardboard suitcase and many desires, typical of a novel poet, to conquer the city, as in another time – the novelesque – Lucien de Rubempré in Balzathic Paris inTended.

In the suitcase, which was older than me, came the signs of some acquaintances of the family in the capital. It is not the case with the relationship of these encounters and encounters that time has gone – piously – erasing, except in one case. Thanks to a telephone number, I was able to approach an unjustly forgotten figure: Ernesto Dihigo and López Trigo, who at first was only a retired lawyer, fellow scholar and distant friend of my maternal grandfather, but in which I recognized, on successive visits to his cozy Miramar house, always cared for and guarded by his wife Caruca Larrondo , many other qualities: he was the son of the professor, philologist and linguist Juan Miguel Dihigo y Mestre, some of whose unfinished work he sought to continue, in addition to being a specialist in Roman law, a retired diplomat – he had represented Cuba in the League of Nations and then, in 1959, he was ambassador to the United States – but first and foremost he was a kind, simple, excellent conversational man , able to withstand the pedantry of a poet’s apprentice who dared to tell him in his face that that study that occupied him so many years of existence: the inventory of the Cubanis-mos in Cecilia Valdés, was an “arid matter”. One of his virtues was patience with young people and that is why, instead of throwing me out on the street, he offered me invitations for the public sessions of the Cuban Academy of Language.

Thus, I, a scholarship with a lot of intellectual and gastronomic appetite, saw myself one afternoon in 1977, with my only long-sleeved shirt worthy of the occasion, on 19th Street, at the gates of the house of Dulce María Loynaz, for a public session of the corporation. I confess my turmoil before that uniformed doorman who seemed to veto the entrance kept franking it, as well as my discomfort in that portal where a group of ladies and gentlemen met dressed according to an indefinable fashion ancien regime. That, like the format of the session itself, with its bell, the treatment of “excellent” to the ambassadors present and the rare mix of retired professors and ruined nobles, from a Marquis to a Viscountess, made me feel as if a time machine had thrown me into a prenatal era.

From that first session I remember just that which I count and that was presented to me Sweet Mary Loynaz, at the time vice-director of the institution, which allowed me to pay a private visit afterwards… but that’s another matter. I see again, as in dreams – more than thirty years and several hurricanes have passed through the island – Luis Angel Casas – son of the Camagueyan composer Luis Casas Romero – with his mane of dieciochesque page and his medal of academic, carried as the one who carries the Order of Toisón, surrounded by ladies who listened to his boutades; Professor Tortoló’s timid shadow, whose work in the linguistic field I have only now been able to go here; and the poet Arturo Doreste, who half a century earlier had been friends with my grandmother and who at the time served as librarian of the institution, in a mysterious enclosure of the Church of Mercy, lent to it.

I confess that my look at the Academy then was not very benevolent. Even if I was an inveterate reader of old literature and not a rampant iconoclast, there were too many things I didn’t understand. Why did the entity continue to claim, that according to a prehistoric decree, the National Poet was Agustín Acosta and not Nicolás Guillén? Why were the figures that seemed most respectable to me on the national scene outside that institution, from the same author of Motivos de son to Cintio Vitier, Octavio Smith, Elisha Diego? Why wasn’t Alexejo Carpentier, so well known to Dulce María, even a corresponding member? Chacón had died a decade ago, Acosta and Labrador Ruiz were absent in the United States – although their armchairs had been preserved – and the rest of the membership, except Dihigo and Dulce María, seemed illustrious to me unknown.

I went back to other sessions. I was able to attend two excellent oratory pieces by the author of Water Games: one dedicated to Delmira Agustini, which years later he published and another very skilled from the point of view of forensic oratory: he must in it pronounce the funeral praise of Joseph of the Lion Light, but apparently such an intellectual neither sympathized nor his work seemed remarkable to him and used the recourse of the transgression : it turns out that he had dedicated a few pages to my coterránea Carmen Zayas Bazán, Martí’s controversial wife and an extensive semblance and defense of her, Dulce dedicated almost all his speech.

In those halls I entertained very varied figures: I remember on a balance of the portal the priest and poet Angel Gaztelu, whom I never dared to address and also the researcher Armando Alvarez Bravo, author of that Orbit of Lezama that had been so important in my literary formation. There was also the jurist and historian Delio Carreras who was not yet an academic but secretary of minutes, although his unique culture and tenacity would allow him a time later to access one of the armchairs, which he would keep for many years.

Maybe the last time I was around was around was around 1980. Then I learned, indirectly, of Dihigo’s death in the United States, of the work in the direction of Dulce María, of the beginning of a new era, in which Salvador Bueno, Luisa Campuzano, Miguel Barnet… The times changed, even if the public sessions still retained that air of celebration of other moments, with those toasts alternating butterfly-shaped puff pastry and a few yemitas whose recipe I could never get, with large glasses of bishop-colored sangria.

Actually, for decades I forgot about the Academy, it seemed a little distant and strange, until early 2006, when its then director, the narrator and journalist Lisandro Otero, informed me that he had been proposed as a corresponding member. I confess that for an instant I feared that I would become one of those gentlemen of another era who hated Cuban literature of their time as much as the novels of García Márquez and Vargas Llosa, and they argued at length about whether or not such a word was still used in Cuba – although they barely spoke to each other and ignored what was said on the street.

Happily, times had changed, now several National Prizes of Literature, linguists of modern training, the airs were different, but, I cannot deny it, when one afternoon in September 2006 I went to deliver my entry speech, in the Sala García Lorca, former garage of the residence of Dulce María, it seemed to me that they attended the event, invisible, those lords and ladies of yesteryear and who laughed politely at me, that now he was beginning to be, as Fina García Marruz would say, among “the elderly, the melancholy, / and how strange does it seem not true?”.

They fired faithful and Cuban people from their beloved cardinal

Homily uttered by Msgr. Juan García, Archbishop of Havana, at the Vigil Mass for the feast of San Cristobal.

The founders of this city chose St. Kitts, the bearer of God, the witness of love, the Holy Help of Christians, the martyr of Christ, the protector and prayerful intercessor. We thank St. Kitts for […]

Professionals in Cuba: a deck waiting

At a wedding party, where several professionals of diverse branches agreed, I hear a person tell about a complicated work vicissitude. The lady in question runs a socialist state-owned company, and has a serious functioning […]