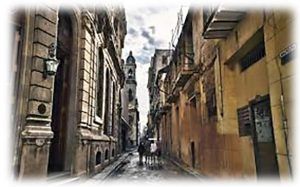 According to tradition, this street took its name from the Via Crucis that members of the Franciscan order celebrated in it, to the Hermitage of the Humilladero – later parish of the Christ of the Good Journey – from the middle of the seventeenth century and which had its stations in different blocks of the road. This pious practice still takes place on the afternoon of Good Friday, albeit with some changes in its trajectory.
It was also called “of the Green Cross”, because on the corner of Mercaderes street was placed one to mark the corresponding station, which still remains in place, when the others have already disappeared from the street.
In addition, they became known as “of the Piadosas Mujeres”, the blocks located between Villegas and Compostela streets, according to some by some sisters, Josefa and Petrona Urrutia, who used to illuminate on Fridays a Christ that they had on the facade, but others ensure, perhaps more accurately, that the appellant derived from the location, near Compostela street, of the station of the Via Crucis in which some pious women cry for Jesus.
In Aguiar and Amargura was the former Convent of St. Augustine, which then passed to the Spanish State, when religious congregations were exclaused. In a wing of him, he opened Bishop Espada in 1812 a School of Drawing, run by the painter Vermay who was the antecedent of the Academy Of St. Alexander. Decades later, the State reserved a part of the convent where the Academy of Physical and Natural Sciences was built, and the temple on the corner of Amargura, with the rest of the convent were restored and occupied by the Franciscans. The church, placed under the advocation of San Francisco, is one of the wide and most striking in that part of the city and features mural paintings by the Spaniard Martínez Andrés. Ω

Catholic footprint in the streets of Habaneras: Calle Jesús Peregrino

Catholic footprint in the streets of Habaneras: Calle Paula

Catholic footprints in the streets of Habaneras: Calle Reina

Man of very low stature, somewhat thick, had a beautiful face in his youth years, when he was chaplain of the school of Mothers Ursulinas in Havana. His voice was grave and devoid of flashy […]

Teaching the gospel and loving others

With a Eucharistic celebration that served as a food of faith to begin the new catechetical year, the traditional missionary shipment was held in havana’s S.M.I Cathedral last Sunday, September 30. The event, attended by […]

All our people are made known, and will be effective after its publication in the Official Gazette Paper, the dismissal of Numancio Guirola as holder of the Ministry of Office Materials, a position he held […]