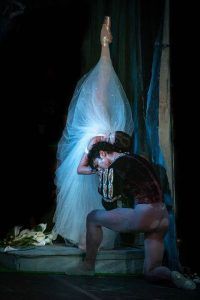 It is a challenge for this chronicler, as the only dance critic from the island and an eyewitness to this historic artistic event for the two nations involved – Cuba and the United States of America – to express with just words devoid of all chauvinism, or nationalist outrageous achievements, the magical nights deployed by the National Ballet of Cuba (BNC) in the Eisenhower Room , the main setting of the John F. Kennedy Center for the Performing Arts, on the edge of the Potomac River in the capital of the United States.
And for those who might not know its significance, I dare point out the ephemeris: it was forty years since the last time the BNC danced in that country and in the same scenic box, with the exempt Alicia Alonso in her paradigmatic role of Giselle. In addition, among other compelling reasons, this living legend and glory of American dance (her career reached the top in the United States during the forties and fifties of the last century), currently CEO of the company and her cousin assoluta ballerina, was present with all the august vitality of her ninety-seven springs.
Gloriously, thanks to the gentiles of the editor-in-chief of Danza Hoy magazine in Spanish and the Press Service of the Kennedy Center, I was able to assess the diverse and remarkable deliveries (all standing ovates) of the four casts selected by the artistic direction of the BNC, with the purpose of dazzling with its technical virtuosity the demanding cosmopolitan audiences that attended this important institution , from 28 May to 3 June 2018.
I will mention in flight of pen, some signs that denote naivety or ignorance in terms of ballet and its canonical repertoire, coming from a sector of the audience assistant to the representations of this classic, by checking its spontaneous and rewarding replicas (sometimes out of time) in the face of the multiple twists; the defiantly charged; jumps with a remarkable ballon; the hard-to-run arabesques held; as well as balances in pointe; chenées on the diagonals of vertigo; tours or promenades a la seconde, among others. At the same time, the pantomime developed with interpretive clarity and, at certain times, the touchstrokes of humor provoked discreet laughter: for example, in the scene of Act I when Giselle and the Duke snever the daisy; or when he disguises himself as a villager and forgets the sumptuous sword at his waist.
Consequently, for a better understanding of neophyte viewers, I find it pertinent to recount the argument conceived by Théophile Gautier, inspired by a popular German legend told by Heinrich Heine, according to the reconstruction of the coréutic writing cleverly performed by Alicia Alonso hem, from the original of Jean Coralli and Jules Perrot (according to the version released in 1841 by the Ballet de L’Opéra de Paris) , with music support composed by Adolphe Adam. Undoubtedly, by passing from choreography to other companies, it was enriched or contaminated with various contributions, such as those of the eminent master Marius Petipa during his pre-eminence in the ballets of Tsarist Russia.
In essence, here the story of a peasant girl besieged or courted by two suitors is told here: one of them is the Duke of Silesia disguised as a villager and the other is Hilarión, the ranger. The beautiful Giselle escapes from her home in the harvest season to have fun with her friends and the favorite suitor: the disguised duke. But her mother, Bertha, is concerned about her daughter’s fragile health, and eventually re-enters her at home, fearing that she will overdo it and transform into a wili (tormented souls of young maidens who died before their weddings).
Unfortunately, when Giselle is crowned queen of the harvest, the rivalry between the duke and the ranger is heated, he bursts into the village the entourage of a royal hunt in search of refreshments and rest, then the duke is discovered as a member of royalty by Hilarión, and Giselle loses his mind because he discovers that the duke is committed to another of his kind , and he dies.
In Act II, the action takes place before Giselle’s tomb installed in a forest clearing. Hilarion is sobbing over the grave, while some other villagers try to keep him away and take the penalty out of his mind. Then strange lights appear (like fatuous fires): the Wilis thus announce their arrival and the locals come out in stampede. When Giselle emerges, Myrtha, the queen of the Wilis, celebrates her initiation into the brotherhood and orders her to dance with the duke until she dies. Meanwhile, the Wilis apprehended Hilarion. But Giselle’s love for the Duke has survived his death, and he tries to save him. The aurora announces his arrival, the duke is saved, the Wilis dissipate in daylight and Albrecht throws himself on the grave and sorrow forever.
Undoubtedly, the women’s dance corps reiterated its professionalism and discipline in two acts, but proved incomparable, referencing, in its elegant “maneuvers” of the spectral second act: impeccable in the transit of the wilis in a position of arabesque – from coté cour to coté jardin; the two diagonals with astonishing precision and sync in their port des bras and the port des tetes – which incited close applause – just to mention the most relevant.

Three principals alternated the starting role, two con-sacred as Viengsay Valdés (electrifying for their reliability in the execution and passion of their stage projection) and Sadaise Arencibia (a display of lyricism and elegance in the line); In addition Grettel Morejón (young refined debutante, with a fresh and personal delivery). Each showed his distinctive personalities by giving us the betrayed villager in all its nuances, in its thesituras, consistent with the dramaturgical demands of the role: even in the spectral figure of the wili, dancing to death. Here, each exhibited his expertise in the difficult batteries, or in the Italian soubresauts, or in the petits battements.
The BNC demonstrated, on this occasion, that it possesses a high-carat male infantry, although some are interpretively revealed to be bison. Notable were the alternators in the role of Albrecht: Dani Hernández (the only ethile of the BNC to this day), with his noble danseur size and beautiful long legs, with worked insteps; the main dancers Raúl Abreu and Patricio Revé (obvious talents in looms, a step away from the nomination as principals). Two excellent demi’charactére dancers alternated in the performance of Hilarión’s important character, it was the case of Ernesto Díaz, with confirmed veteranity, and the young debutante Ariel Martínez, both revealed his histrionic qualities and the athletics of a ranger.
We will highlight the remarkable rigor in the delivery of the virtuous variations of Ginett Moncho (Myrtha, queen of the wilis), or the alternating duo such as the Wilis Moyna and Zilma, in the skin of the young Chavel

to Riera and Ivis Díaz or Ely Regina and Barbara Fabelo (dazzling in their renversés or the respective Assemblés).
In this version, Alonso has replaced, in the first act, the traditional pas de paysains with a festive and brilliant pas de dix, where the soloists stand out for their technique and musicality, and the compositional characters acquire a relevance not granted in other productions, such is Bathilde, the fiancée of the Duke and Berthe, Giselle’s mother.
Let us acknowledge, before concluding, that while some props and costumes of the first act are fatigued, susceptible to renewal, whether in their colors and figurines, the rest in production maintains the proper scenic conditions. As for the second, its production and staging continues to mean the Grand Prix de Paris, received several years ago at the Champs-Elysyses Festival.

It will not be idle to point out the excellent musical performance of the Kennedy Center Symphony Orchestra, this time under the baton of the Cuban master Giovanni Duarte, who benefited from the great installments of the wind-metal section and the harpist Susan Robinson. Ω

Carlos Acosta: the triumph of a dancer

Archdiocese of Camaguey, Archbishopric, 24 September 2018: Many people are expressing their views on the 224 articles of the Draft Constitution drafted by the National Assembly. However, as a letter in the newspaper Adelante last […]

This September 7th the bay of Havana was again close to the devotees of Our Lady of Rule, who from early in the morning approached the National Shrine to pray the Rosary of the Aurora. […]

“I confess that I will never be more happy to write a book, and that my only contrition – since I don’t give a damn about the history of literature – is the work that […]