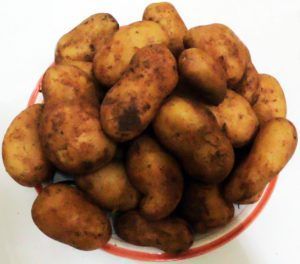 Like a cry from Tarzan when he found Cheetah, it was the bellowing that woke me up this morning, the potatoes arrived, a neighbor came from the street to another on his third-floor balcony. He didn’t keep a voice waiting behind my back that he said to me, did you hear that, you as it’s necessary in our kitchen. I live with people at risk in Covid times – 19, so leaving home inevitably is my turn.

After the morning routine, protected and with the backpack on my shoulder, I took my camera and set out to leave. I organized my roadmap to have to leave only once, so I would meet the best of vaccines in this time of pandemic, social estating. First the potatoes, then the pharmacy and finally the bakery. I set foot on the sidewalk convinced that in a short time I would begin to find irresponsible images that would allow me to write about them later. In the heart of the Los Sitios neighborhood, that would be “a piece of cake.”

In the first four blocks I stumbled upon few people, all with their nasobuco. When I arrived at the market I came across a queue of seven people, something rare at nine in the morning, all protected and maintaining a proper distance. As much as I tried to find a photographic gap, he didn’t show up. I bought my potatoes and got to the pharmacy, something weird is going on in my neighborhood, five people away from each other, none talked to each other and over-separated. I couldn’t take an impact image here either, but I still had the queen of the queues in my area and that gave me a lot of security. When I arrived at the bakery I suffered the greatest disappointment in the morning, the tail was short, there was no lack of a nasobuco on each side, only one person went to the counter and the separation exceeded the meter between the people. Again I would go blank, I had not been able to take so far a frame worthy of analysis.

Paraphrasing a popular sports narrator, I left the bakery cocky, sorry and meditating, like the puncher who struck out. Today I was coming home with all the entrusting, but without a worthwhile photo. Suddenly, as a breath of the Holy Ghost something said to my subconscious: go easy and thank you for your blessed frustration today. It was then that I realized that this morning I had taken the best images of the last days.

With everyone and for the good of all

A pandemic transits the orb (4)