Known is that among Cubans, from the telenovela, to the ball team, to the last news that haunts the popular voice, there are plenty of disagreements and eternal arguments. However, there are symbols, figures, respects, that have managed to overcome all adversity and have almostanimous special devotions and affections, both among the tirios and among Trojans.
Fortunately, I don’t think any Cuban, left-wing or right-wing, has burned some lone star flag, to protest or to back up his political ideas, or to denote or sustain some government. The homeland, the flag, the status of Cuban and the symbols all that in that condition are included, go far beyond the ideological divergences. Similarly, in any religion, and even in the case of fraternal organizations, it is love, help, and respect for others that are promulgated. As a quick example, there are not a few anecdotes of chivalrous gestures between Cubans and Spaniards in Cologne times, because the category of Freemasons twinned them in honor and respect, beyond differences on the battlefield. After the war, it is not necessary to repeat that no Spaniard was killed or looted any winery, out of hatred and resentment. Not a few peninsulars added to their symbols and identities ours and perpetuated them, already amenulated and Creole, in their children and grandchildren. 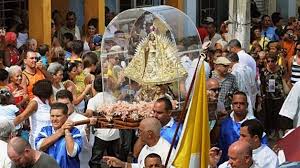 However, while September brings for believers, and for Cubans proud of their traditions, the celebrations associated with our Lady of Charity copper, politics looms its hairy ear. Again, ideological stances, and more than these, hatred and the desire to separate and prevail, seek to meddle and soil issues where such attitudes and feelings should not be accommodated.
Whoever subscribes to these lines is not even baptized. But that national mecca, which is the Sanctuary of Copper, must be a must-have presence for every Cuban and Cuban who cares about it. There I have contemplated with pride, admiration and even some inevitable mysticism and ecstasy, the beautiful figure of the Patron of Cuba. The gold of his suit, more than wealth, I think reminds us of the worth of our greatness, our loves and dedications and what is lacking to overcome our sorrows and deficiencies. There I have also left my offering and asked for health and well-being for family and friends. There I saw the payment of promises from the military and footballers, athletes and intellectuals, of lighting and of children of neighbor. How can some pretend that a sacred symbol (in all the meaning of the word, which fares the religious) like that Mother of all, serves to sustain or to hate and oppose a political system?
On the one hand, opponents of the Cuban social system aim to turn a religious celebration of national tradition into an act of protest. On the other hand, voices of the most stale and supportive orthodoxy (the same, or the heiresses of those, who once wanted to erase all vestiges of religion as a scourge of the past), now rise in defense from a plural, which does, as Cubans include them, but which many notice forced or too opportunistic. Charity, without exclusions, is everyone’s. Mothers don’t love their children by passport or ideology. But neither side has the right to politicize a celebration that rightly calls for harmony, peace, unity and not hatred. 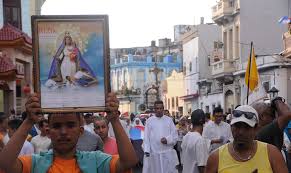 Believers, and many non-believers feel a healthy, Cuban and pure joy, knowing ourselves protected and loved by that Cacha of all. Even if only, beyond faith, to have one more reason for pride and another reason for love for this beautiful land. Even if it happens because of that clean enjoyment, enjoy having something that belongs to all of us and is far beyond, by its meanings, by its stories and values, from the earthly and sometimes changing membership of a party. My grandmother, my mother, many men and women in my country, practiced and sustained a devotion and respect that should not be tarnished by political ideas. Neither those who went to fight Angola, nor those who decided to cross the Florida Strait, put a form of militancy before the altar to which they s requested protection and to which they paid their promises. Likeever, dates related to our Lady of Copper Charity should not be celebrated, claiming opposition belongings or from absurd defenses that confuse nationality with leftism.
There are too many misfortunes right now, just because of the policies, hatreds and selfishness on the sides of the world, so that also the premises of peace and union are soiled with ideological mudslides. The celebration for Our Lady of Charity of Copper, clean of oppositions and support, must remain a date and a feeling of all. May, under those powers, that the motherhood of an entire country bestows upon its golden mantle, let us be able to find more and more reasons for unity, peace, life.