Every time you watch a movie, you don’t have to be looking to see if it looks like another. Whether it is a remake or contains tributes to works from the past, the new film is an emancipated unit, which is why it responds to a certain epochal dependence and ideo-aesthetic and artistic freedoms. It happens that when we accumulate a lot of movies seen, it is easier to appreciate direct or cross links. In this way, the viewer’s interest can be aroused and, for the critic and historian of the seventh art, it makes it easier for him to notice associations and share them in his texts. Of course, it is not necessary to have received almost all world cinematography –because that is impossible– to realize when you are in the presence of a good or bad artistic work.

While there are industries where some genres are given in better form and content than others, the important thing is to recognize that how much they do should be valued above rankings. It is decisive, frequently, to obviate fears or disparagements, if we want to understand a film associated, of course, with the cultural history to which it belongs, but which deserves to be evaluated in the present. Sometimes a work refers more to the time in which it was made than to the period in question. Hence the importance of remembering that it is not the same to talk about Spanish cinema from the Civil War or the Franco period as it is about the same after 1975.

Likewise, it is necessary to clarify that, although some disbelievers underestimated –they still do– Spanish horror cinema, the Iberian country has gems of the genre. Segundo de Chomón and Edgar Neville began the so-called fantasy terror that was later welcomed during the sixties and seventies of the twentieth century. From Jesús Franco to Alejandro Aménabar, the list of Spanish filmmakers is huge and highly appreciated for their contributions to the genre and their relationships with viewers. Do not forget either that the Spanish version of Dracula (1931), by George Melford, had a multinational cast and many scenes would be shot on Spanish soil. So terror is worthy of consideration in a country with a history of makers and moviegoers. 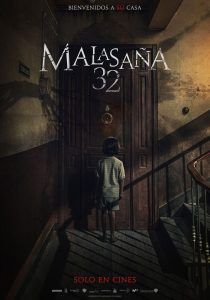 Now Malasaña 32 (Albert Pintó) has been released, a film that takes up haunted houses –so common in horror plots–, but does it have any pretensions to connect sociocultural and even political reflections with what will happen from the inside?

It connects a lot with Poltergeist (Tobe Hooper, 1982), although it does not have the pretensions of El espinazo del diablo (2001) and El laberinto del pan (2006). By the way, these two films by Guillermo del Toro, where terror and fantasy are mixed with an extraordinary imagination, are two of the most witty stories set against the background of the Spanish Civil War. One of the most poetic and beautiful would be The Spirit of the Beehive (Víctor Erice, 1973). Now with Malasaña 32, the plot takes place especially after Franco’s death. The conflict enters and develops on behalf of a representative spirit of the days of Franco’s nationalism. Will there be more than references to that past?

Let’s recognize that the plot is built on the chain of terrifying moments that accelerate the tension due to the rises in tones, the dynamic nuance of the transition or the crescendo resumed of its soundtrack. Here one goes back from mystery to belief. We already know that the ghost is there, that not all family members can see him and that he is willing to harm. One, with the characters, will come to wonder about the reasons for the evil.

Screams and whispers, doors that open and close, lights that go off, armchairs that move, the simulation through the windows, the old and labyrinthine building… nothing new under the camera lens. However, the moments of the pieces of paper that are passed from a string to gold and the child talking with a televised puppet are suggestive. But those subtleties of the recondite of The Sixth Sense (M. Night Shyamalan, 1999) and The Others (Alejandro Amenábar, 2001) are not expected.

It doesn’t want to be your typical bloody dead and murderous spirit movie. However, more than popular ways to scare the viewer, it ends up being too gimmicky. And it is a shame because Malasaña 32, which exhibits a very attractive setting on the screen, carries a complicated life story, the necessary one, to have given more substance to the narrative. Can intolerance continue to punish a lost soul? Here is the confirmation. What a way to add fuel to the fire! But the film has already advanced so far as to identify us with the reasons for the complaining and dissenting spectrum.

After another place in the sun

A night in Miami