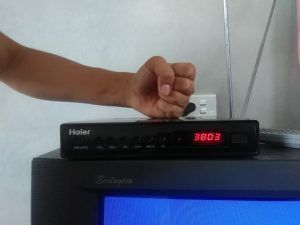 Scorching it. Busy village is a saved people.”

A few months ago, this section put its catalejos depending on showing some malfunctions of Cuban television. Beyond criticism of specific programs, our ideas referred to various details of billboards and advertisements, as well as alerting us to certain content inconsistencies, to reality, and their possible consequences on the public and media credibility.

Now, thanks to the warning of some readers, or more than readers, viewers, again comes the fabric through which to cut inefficiency and dejadity. Again, and this time with nothing to do with the contents of the grill, there are flagrant displays of disability and, at the very least, abandonment, in some of the services and options of television.

The digital signal decoder device, the famous box, has several features. We already mentioned the guide that allows us to know in advance the programming of all channels. In the work where we touched on the subject, we talked about the joggings and pifias in spaces that were advertised and then in the air there were others. As if it were a tournament to invent undoing, new awkwardness now appears. Confusion has continued. Above all, synopsis and program descriptions are breeding ground for errors. Sometimes they are insignificant and sometimes as serious as lasting errata, misspellings, and infamous or incomplete writings.

For example, during the eight or nine weekends of the summer, the High Impact series (the writing) sported the erratic announcement of “Epidosius”, rather than “Episode”, during each weekend on the billboard. The text, that was changed, was followed by the order number of the chapter to be displayed. As two chapters are broadcast in each submission, the visible errata appeared twice on each occasion. It was only at the start of the third season that the desatino was fixed. On eight Sundays, no one was able to notice the mistake? Don’t review a text before publishing it? Was the number so mechanically changed that no one saw the slip in so long? In such a string, we can remind a friend who treasures on his mobile the photo of the announcement of a chapter called Invorrable Footprint, of a national police serial.

You may discover synopsis such as: “Chato is an Apache who lives between two cultures: on the one hand he feels a certain sense of fidelity to his tribe.” And that’s it. So we didn’t know what the other side of Chato’s loyalty is and the other culture in which it is debated… and, by the way, with no desire to see the film. Likewise, this jewelry of the writing appears, in a talk show with a very outstanding Cuban athlete. The synopsis says: “Spend some time with renowned personalities from Latin American and European culture. Politicians, athletes, artists, people of the most varied”. And that’s where it ends. With an end point and everything. As you can see, it is a prayer that would drive the most sane of the editors crazy, and, of course, to destroy the good wishes of the unhappy readers-viewers to see the space. That, so as not to overwhelm with scoring and accentuation errors, amphibological writings and even dumber and meaner sometimes than the same programs they describe. In truth, examples abound, across multiple channels. However, the intention is not to peck or slit anyone’s throat, but to point out a mistake, to correct it.

It is also possible, in this enumeration of weeds, the mention of not a few subtitles of serials and films that are shown on television. It is bleak to read translations in the worst way “I, Tarzan; you, Jane” or the Hollywood Indians talking in infinitives. There are no conjugated verbs, grammatical constructs are stick and in translations made with computer programs, which are rarely accurate and know how to differentiate contexts and nuances. In the end, each subtitle is an exasperating nonsense. You can take the opportunity to practice your English, if the series is not in Croatian or Swahili, or to go from channel to edest two or three juicy bad words dedicated to the person responsible.

Another detail is in some of the extra-television services offered by the famous box. For those who don’t have the paper yet, we do a brief description. This is a screen where you can access a menu that allows you to enter a news page; a second offers services, such as the announcement of time or a cultural billboard; another has a guide with important phones and a more shows news headlines posted on various national websites. On the splash screen, the ICRT Information System logo appears on the side. Another logo reads: “Much more than television.”

As these lines are drafted (September 30, 2019) the briefing page helps us know that Cubans in the Pan Americans of Lima played with their hearts and that Donald Trump has made another one of his own. The only problem is that the latest news is dated only until August 14. The screen announced by the headlines of several national websites, looks equally a bleak back of more than a month in their publications. Perhaps it is helpful for a historian to know that that day they forecast rain in the western region or that a hip hop festival began. For the one who goes out today, and gets wet, not so much.

The economic circumstances of the island, plus the technological advancement of the planet, cause newspapers and magazines to reduce their circulations and move more and more to the digital sphere. It is known that not all people can still easily access the Internet in Cuba. Even not even everyone already has the famous box. In any case, it is obvious that, even here, it is intended to reduce and perhaps one day eliminate the expenditure of all kinds that comes with printing thousands of newspapers. So if this option of digital television, without a doubt at a much lower cost of production than printing a newspaper, can be helpful, what explanation is there for this information service to be completely outdated? And if there is explanation, not justifications, why a month and so much later no one knows? As in so many other cases, the already proverbial lack of fixer becomes tangible and shows its hooves of abandonment. In order not to abound in the marketing detail that, by now, all readers loyal to this service must have abandoned it altogether after more than a month of disappointment. They’ll find out the other way if it rains or not.

Because, in addition to everything else, the first thing one thinks about this issue is the Olympic contempt, and the helplessness to remedy it, which is suffered by the viewer from the media, which are not private. Therefore, contempt is official, institutional, state. Of course, the state is not an entelequia. In this case, the State is the careless or incapable editor who mis-writes a synopsis, or responsible for a news grid not being up to date, or whoever streams a film with idiotic subtitles (plus all its superiors than – badly – review his works). The media, the person who presses the button or key, has to ensure the quality of what they broadcast. As good, or true, or just as the ideological content they transmite, if the vehicle is silly, poorly written or careless, the message is lost, plus all the expense of generating it.

The media is a leader of opinion, they transcend concepts and validate ideas. That’s why they can’t afford to err, misspelling or bad writing. Much less is justified that there is more than a month behind in the news they offer. No credibility and trust is left behind such repeated failures. Of course, the task of writing well is not unique to the journalistic profession. In fact, without being a Nobel Prize, mastering the language, knowing how to write correctly, must be a built-in knowledge of every person. In professionals, of any branch, it is an obligation. In those who have the work of writing public content, it is an essential requirement.

Journalists know the heartbreak, the anger, that is suffered in the face of a good work that a typo, flagrant or tragicomic, spoils forever, because the printed sheet is no longer right. The best scribe is out of a blur. But, a hundred blurs later, you have to check the lenses, or the brain, the scribe and the one who oversees it. A country where there have been no illiterate people for decades, where culture is daily battle, cannot have a television with bad synopsis and failed scriptures. Whatever the circumstance or energy crisis where you live, and even if the scribe is late and haste to deliver, that doesn’t depend on oil.

An old professional proverb says lawyers lock up their mistakes, doctors bury them and journalists publish them. Whether or not journalists write such dislates, we will have to think about locking up, or better, burying, neglect, mistrust, lack of interest and responsibility in what is being done on a daily basis. Let’s do better the little piece of country that we have in our work. All the other big pieces, besides getting better, are going to thank you too. Ω

Havana is a cinema cemetery

To the poet and friend Juan Carlos Flores, who suggested the subject. In 1959 ICAIC was created and cinema, for the first time, began to reach sites never before suspected. The background images show the […]