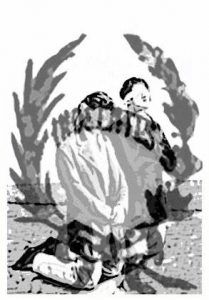 I had not yet overcome the deep emotions aroused in me the Cuban film Innocence and I was already thinking of writing these lines. When I read years ago the book On November 27, 1871, by Fermín Valdés Domínguez, I remember the same feelings emerging. Alejandro Gil’s heartbreaking film unfolds another sad page of the black book of Spanish colonialism in Cuba, the historical events that concluded with the cruel shooting of the eight medical students.

The young men were convicted of the false crime of desecration of the mortuary niche of the Spanish journalist Gonzalo Castañón, captain of volunteers, provocative and brave at all, who had died the previous year in Cayo Hueso, during a confrontation with cuban émigrés. The Creoles didn’t believe in protective bulletproof Maya under their shirt. As a sub-film, the tireless search for Fermín Valdés, José Martí’s great friend, of the mortal remains of his companions, but more than that, of the will to prove the innocence of his murdered brothers, is presented.

The remains of the eight medical students were found after sixteen years of indefatigable search, because circular 125 of the Bishopric of Havana had been applied to them, where it was established, among other things, that “the mortal remains of those who do not deserve ecclesiastical burial are buried on the outside of the cemeteries”, a provision that was not promulgated for the purpose used , but for those who were not Catholics. They were then temporarily deposited in the chapel of the Alvarez de la Campa family.

Fermín Valdés Domínguez says in his text: “Already exhumados the remains of my eight colleagues, several newspapers began a public subscription, in order to erect them a modest mausoleum […] soon this pious monument will be erected, under which will remain those precious remains, which must always be venerated by all Cubans and respected by those who know how to mourn the misfortunes of the homeland”.1 This sculptural tribute, located in the cemetery of Columbus and that of La Punta, which is best known, will be the theme of today. It is fair and necessary to dedicate the following quartets to these sites of great historical value. They summarize years of the deflos of a great Cuban and the efforts of a people to safeguard the memory of their innocent children.

Assuming the knowledge of the tireless work of Fermín Valdés Domínguez, who, even in the middle of the colonial period, did not cease to demonstrate the truth, then it is necessary to recognize his campaign in the press of the time, mainly in the newspaper La Lucha, to awaken the will among Cubans to erect to the victims a monument in the cemetery of Columbus and that it becomes “The most eloquent tribute of love and mercy of our people”.2 This campaign was joined by other newspapers circulating in Havana and the rest of the country. They also initiated public subscriptions that were taxed for the same purpose. It was in the newspaper El Cubano, directed by Antonio Zambrana, that a meeting was convened on February 15, 1887, at Calle Prado number 71, former house of Céspedes, seat of the Autonomist Circle. Details of public subscriptions were finalized there, leaving the university’s medical students in charge of the collections. A commission of respectable personalities of the time was also created, with Fermin at the helm, who would be the manager of the mausoleum project.

The response of the people was blunt, in a very short time there were already several thousand pesos. The first thing that was done was the purchase of land in the cemetery of Columbus for the sum of 919.80 pesos gold, which ran to the account of Fermín Valdés himself. It was located in Northwest Barracks, table number 13 of the Second Order Cross of the necropolis and an international competition was opened for interested artists to send their projects within a set timeframe. Artists from the courtyard and foreigners participated. The final decision was in favor of the Cuban José Vilalta y Saavedra, who at the time was studying at the Academy of Fine Arts in Carrara.

The author noted that he had conceived his project on the basis of the concepts of public conscience, time, justice and innocence, as required by the basis of the competition. He also sent the sketch and specifications that I set out to make Vilalta’s work better understood:

“The monument will be ten meters high and will run in top quality veined marble […] the statue on the right … represents public consciousness … on the upper line, there is an urn that involves containing the remains of the victims … on the left, on the same line, there is another statue representing Justice and at the base … there is a door through which comes a statue representing innocence that passes from the field of darkness , to the field of light and truth … the great pyramid … represents the great City of Havana through its shield and above […] a majestic and superb cloak with a grandiose crown … thus demonstrating pain and mourning.”3

All the preliminary issues were brought to work. Vilalta pledged to do so for the sum of thirty thousand Pesos Spanish gold. On October 10, 1889 the artist notified in a letter to the director of the weekly La Habana Elegante: “Very my lord: With the greatest satisfaction I am pleased to inform you, so that in turn I will inform the public, day of the date, has left the port of Genoa, on the way to that […] the complete student memorial.”

Although it was intended to be ready on November 27 of that year, the yearning could not be realized until April 1890 and was regarded by critics as discreet in terms of its artistic conception.

It was alluded that the expressive elements that made up it had nothing new and had already been used in countless previous works. This is true, Vilalta was never a transgressor of aesthetic canons, even in Columbus’ own cemetery you can find exponents containing the same artistic elements, but none of that takes historical merit away from the effort, besides, what cannot be denied is that he was an excellent sculptor.

Vilalta bequeathed to Havana more than one important work, suffice it to point out that of Francisco de Albear, the José Martí of the Central Park and the sculptural ensemble representative of The Faith, Hope and Charity of the finish of the triumphal arch that constitutes the great cover of the Christopher Columbus cemetery itself. Regardless of any artistic argument, with the consolidation of this work, Fermín Valdés and Cuba saw a great dream come true.

As if the effort had been little, neither Fermin nor the people of Havana were content with what they had achieved. When news broke that the former Barracón de Ingenieros de La Punta would be demolished to widen the Paseo del Prado, already under the American intervening government and with Leonardo Wood at the helm. Fermin made arrangements directly with the provisional governor to leave as a sad testimony of the act, a wall fragment where the traces of some gunfire on that fateful day were still observed. I was aiming to consolidate another monument, but now at the scene of the crime. The governor raised no objection and instructed demolition engineer M. Borden to lift the plane of the piece he was supposed to leave undesired and an iron fence that would circumfer him.

Before long the work was finished, simple but frank. It was just the fragment of wall, surrounded by a small fence that was lost behind the plants of a small garden.

But this was only for a very short time, the vindicator of the students and friend of the apostle, together with survivors of the fact, continued to work to endow him with greater decorum. He surrounded himself with a more showy fence, placed a plaque reminding of the fact and another containing a palm crown made of bronze, with the strong qualifier of Innocents.

The memorial was inaugurated on November 27, 1899, 120 years ago. A decade later, on June 13, 1910, the Cuban who set out to perpetuate the memory of those eight young men dies. His mortal remains and those of Professor Dr. Domingo Fernández Cubas, defender of his students in 1871, were deposited in the same pantheon of students in the necropolis of Columbus.

In 1921, with the aim of providing greater solemnity and better view of the monument, a kind of roundabout was built, preserving the wall fragment and plaques placed above, but giving it greater importance by the sea, perhaps to bring an eye-seeing element to the maritime environment of the entrance of the bay.

In this way the monument was configured to the eight medical students that we all know today in the vicinity of La Punta, pilgrimage site of students and village in general every 27 November, where a flower is never missing.

If it is necessary to preserve historical memory and keep in mind every fact that gave body to our nationality, it is also right to pay respect to those who committed their lives according to achieving these goals. Fermín Valdés Domínguez has been a figure that has historically been linked to Martí’s life and many may come to see him as a secondary “actor”, but it was not, it was two different lives, each with its own lights and where Cuba was the common point. Colonel Fermín Valdés joined the war of ’95, fought under Serafín Sánchez, Carlos Roloff and José Maceo, and ended the campaign as head of the office of Máximo Gómez. Give Cuba tribute to the person who dedicated body and soul to the just cause of the eight medical students infamously executed. Thanks to their efforts, today’s Cubans can have two places to pay tribute to their innocent companions as well.

Innocence: in the Sentimental Memory of the Cuban

Did Columbus leave Cuba or did they take him?