We traveled through the ninth month of the year dealing with Covid-19. We would have wanted to live all this time in a capsule, in a hyperbaric chamber, in hibernation, and go outside only when it all happened. But so many things have happened in the global village in these seven months… And what is life without the experience of everyday life, of what happens and happens to us.

No matter how isolated we were, we couldn’t be without hearing the beating of the world, the multiple stories, from the origin and spread of the new coronavirus and the follow-up to the health crisis, to the social effects of an African-American suffocation by a cop in Minneapolis. Isn’t that quite one story?

On the island we have not been oblivious to the events outside, but also inside things have happened. And for everything there are criteria and positions that cause dissequents and shocks when intolerance emerges, the voices that scream louder because they want to be the only ones heard, the ones who believe themselves to be bearers of the truth.

Word New wanted to share the expressions of a group of diverse voices to offer to its readers as a sample of the personal and collective experiences that have been lived in this peculiar and amazing leap year, this twenty-twenty turned quarent(en)a.

We have asked these people to tell us about their experiences in these months, how their days have passed, how they have faced the challenges and what reading they make of what happened, what their ideas are about it.

If any of those officials, enthusiastic in naming the years, had named it after 2020, this would have been the Year of The Salt Flat. And, at least for once, that elusive guilt that the Cuban attributes to the most diverse entities in this world or the other would have had, at last, a real recipient, atheist and depoliticized.

Invisible, deadly and more television than any president, the coronavirus has stirred our lives. Every morning, we hope that Dr. Durán’s voice—that cordial, almost monotonous voice, as a tobacco reader—will declare the statistics of each province, in a kind of mind-blowing competition, or waiting for the Russian vaccine and the umpteenth remedy against the infectious apocalypse.

The Year of The Halling has again shown that Cuban is able to convert setbacks into stories, proletariatly. No matter the genre (gossip, ball, meme, deranged or reinvented news), the badr the public thing gets, it responds with humor of all colors, with a verborrea that defies any nasobuco, even if it is waterproof or plastic.

It must be admitted that coronavirus is a very serious matter, and that also with the new outbreaks – we talk about the virus as if it were the zafra – people have lost their fear, responsibility and desire to respect home prison.

As the numbers of the disease rise and fall, Cuba’s own environment has become more irrespirable, among the gaps—normal and added—the incursions of our presenters into exorcism, the anesthetic value of lemonade, the de-demonization of the dollar, and the police raids with which the newscast spices up every family meal.

Anyway, there’s no way to get bored in this 2020, salty and stormy as if Hemingway had written it.

Now let’s move on to the international ones, because in this Year of Salt flats every traveler was a Tom Hanks, shipwrecked in terminals and hospital offices, where the health bureaucracy is impregnable. If you ask me where I was in a good part of these eight months, one possible answer would be: on an internationalist tour in countries where the coronavirus was doing its masterpiece, hiding at airports and lined up in disinfectant, as people advanced fearful and with a funeral face trying to reach their destination.

A communications grant took me to India at the end of January, where I was due to leave in May. There I had to stay in a university bunker, with friends from various countries and languages, waiting for repatriation flights that took me from Delhi to Ukraine, and from there to Frankfurt, and then -although I almost lost the plane – land in Havana. 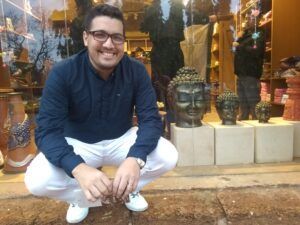 Half-stunned for the three days without sleep, they took me to Sitiecito, in Villa Clara, where there were the ruins of what was in life a pre in the countryside. There, in a barracks with seven more aliens, I lived a quarantine as God and MINSAP command. (We must not delve, among Cubans, into the living conditions of this modest all-inclusive hotel, which immediately reminded us of other salt flats, more contagious and ancient than the pandemic.)

As the saying goes, I “ran hopefully” on three continents until I reached the island. Other friends are still waiting for a flight that suits them or — for thousands of reasons – they have been left in several norths, scrambled, brutal, but which frighten less than our juncture, well seasoned as if that were not enough, by this Asian virus and disconcerting.

Now they say that there are cases of bubonic plague in China—a true classic in the history of epidemics—that Putin is going to save us all by pricking his vaccine, and that the Japanese are going to leave us without Olympics. Meanwhile, politicians everywhere look with envy at this famous virus that has robbed them of the attention of respectable audiences.

As a fugitive, I wait at Las Villas for the end of all this in good company, with my books and an arsenal of habanos that, by my calculations, will burn for the duration of the lockdown. And if this text were my will and I had to recommend a method to survive this double madness—pandemic and economic dizziness—I strongly ask you to read, write, love very much those next to you, talk as if there is no tomorrow, and laugh a lot, even below the nasobuco.

And I sign—like the outstanding little pionerito I never was—in Santa Clara, 2020, Year of Salt Flats.

XAVIER CARBONELL is a cuba correspondent for the World Catholic Association for Communication (SIGNIS). Researcher at the Diocesan Library “Manuel García-Garófalo” of the Bishopric of Santa Clara. His novel “The Book of My Dead” was the winner of the Santa Clara City Foundation Award in 2020.

Covid Notes of the Year (3)

Covid Notes of the Year (7)