Throughout the twentieth century there were few popular or eccentric characters who by their behavior and the way they manifest themselves encouraged the social life of Habanera. First of all, we would have to place in this relationship José María López Lledín (Lugo, Galicia, 1899-Havana, 1985), who assumed the title of El Caballero de Paris and has been immortalized in a song that played Barbarito Diez and in a statue located in the Plaza de San Francisco, and then carlos Manuel Pérez Rodríguez (Candamo, Asturias, 1910-Havana, 2003), better known as Bigote’e Gato for his massive mustachos, seized a bohemian bar located on Lieutenant Rey Street and owner of an old convertible car that crewed with a scandalous red beret boxed in his head, without being a communist or a requeté. This character was also the inspiration for a guaracha who became famous in the voice of Daniel Santos, The Restless Anacobero, and which begins with this presentation: “Bigote’e Gato is a great subject / who lives there by the Luyanó”. In a more discreet line there would have already been to place La Marquesa, a woman of black robe who very seriously considered herself a member of the Cuban high nobility, dressed with ridiculous elegance and used to stand for hours in front of the restaurant La Zaragozana, as well as María Calvo Nodarse (Macorina), who received in 1917 the title of driver and thus became the first woman in Latin America to have authorization to drive a car. His sympathetic image with his hands on the wheel became very soon popular and led the Asturian poet and journalist Alfonso Camín, then established in Cuba, to dedicate a poem that was then musicalized in the form of a danzón with the plume chorus “Put my hand here, Macorina”. Memorable also results El Cojo de la Horncina, an individual of small stature, but with a striation voice that by a couple of pesos he was able to travel half Havana dragging a crippled leg and screaming in favor of any politician, as conservative as it is liberal as popular. Already in much more recent times we can mention the defunct Armandito El Tintorero, tireless and charismatic animator of the Industrial team in baseball games held at the Latin American stadium.

Some of these characters have been evoked several times by Ciro Bianchi Ros, Rolando Aniceto and other historians interested in 20th-century Centuries-old centuries-old costumbrista life. As far as we know, none of them have addressed the figure of Isidoro Lombera Marrón, named in his time The Father of Cats and very present in this capital in the first two decades of that century. His personal history and philanthropic actions lie in oblivion. Rescuing your figure is the simple target of these lines. 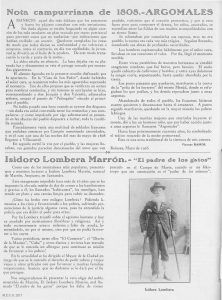 News about The Father of Cats

He was born in Marrón, a town in Ampuero, Santander, Spain, in 1837 and when he was only nineteen years old he arrived in Havana, like many other young Spaniards who were afraid to leave their terroir because of the extreme poverty that prevailed in many rural areas, and animated by the dream of making a fortune. Already on Cuban soil was seen in the need to perform humble tasks as a trade dependent, warehouse employee, stevedore in the port, street vendor… In the midst of these penalties, he managed to complete elementary studies and acquire a basic culture not without gaps. He also married and in 1885, residing in Guanabacoa, was one of the founders of the Universal Fraternity Lodge No. 2. When the completion of Spain’s colonial rule over Cuba occurred, he decided to remain on our soil, where he had already taken root.

A short time later, having been widowed, having suffered an accident that seriously affected his left leg and forced him, thereafter, to rely on crutches and, to top it all off, having also suffered some mental disorder, he became a very unique and quirky being, extremely kind and charitable, dedicated to doing good and public charity. This fraternal inclination led him, according to some news, to found in 1907 the Cuban Humanitarian Society for the Poor, Animals and Plants, which we ignore whether it worked or not. The truth is that he volunteered to help the many hungry cats who, at the time, concentrated in and around India Park with food. Similarly, he distributed used clothes among the homeless Habaneros. Isidoro Lombera was in charge of touring the markets, anchorages and cafes in the area to collect the remains of usable food and, after sorting them, give them to beggars and cats without taking into account the taunts that he was a victim. In his voluminous and well-documented book of memoirs Among Palm Trees (Migrant Lives) (Mexico, 1958), the aforementioned poet Alfonso Camín collected this evocation of the character: “By day I was supporting my hungers in the Park of India, contemplating the “Father of Cats”, a demented mountaineer of apostolic beards who gathered them around him, after spending the night looking for piltrafas and other waste through all the drawers of garbage that they then took out at ten o’clock on point…” (p. 282).

In addition to this memory, Camín incorporated it into one of the many poems he wrote about his personal experience in Cuba.

I used at the time romantic chalina,

aggressive gaze as a bad enemy,

a sharp dagger at the waist,

solved the heart and the safe hand.

Despite this prevention of iron and stick,

I felt an immense hunger for bread and culture,

justice and love, dream and art,

and in the Field of Mars

who used to mock the “Father of Cats”,

a demented mountaineer with seabeards

who, when playing a flute, went out on the way

with emerald eyes and feather tails.

I fed them a jog and a moche

all the waste I was looking for at night

this good mountaineer of patriarchal beards,

and then they walked away, sweet, reverential,

staying the old man, the same as a blessed one,

In those days the affable figure of Isidoro Lombera Marrón became well known, as evidenced by the article “El hombre de los gatos”, by journalist Manuel Rodríguez Rendueles, published in the much-read Diario de la Marina in October 1911. Here are some of his fragments:

“Who doesn’t know the cat man in this city? He is an old man of luengas beards, gray hairs, a look and a sad look…”

“The cat man, dedicating all his care to these wandering animals, providing them with the daily food and caring for them with affectionate request, is more than just a maniac or a madman as some assume: it is one of the most interesting cases presented by human psychology.”

“The cat man, that old man of luengas, gray beards and sad and eltive looks, is not to be doubted by a failed actor of the social show: before the cats of the Field of Mars, he had other great loves, other tendernesses, other dreams. He is looked at curiously, because it is a rare thing in the world: a man capable of love.”

Lombera Marrón also managed to publish, without us knowing with what resources, the bewildering booklet History of the last fifteen years of my life (1916), in whose pages she gathered poems of no literary value, short autobiographical stories, information and articles about her person appeared in the habanera press and brief reflections on cats. As an example of the author’s mental disorder and the very limited literary aptitude he possessed, we will reproduce these brushstrokes, which he titled “Feline Philosophy”:

“The cat is the most man-like animal.

“The cat always seeks the cat; the woman searches for the man with the greatest disguise.”

“When the cat is old, his hair falls out; when the man is old he goes bald.”

In those years, Lombera Marrón also went so far as to insert some of her collaborations into the capital’s periodicals. As far as 1913 he had seen the light in regeneration magazine an article of his accompanied by a personal photo with about a dozen cats at his feet. In August 1916, some works of his authorship appeared in the widely circulated newspaper El Comercio. In the previous month, La Montaña, “weekly magazine of the mountain colony”, had also reproduced another photo of him and, at the foot, an article of recognition for his constant altruistic work. From this text we reproduce the following paragraphs:

“This sexagenarium prevented more than 16 years ago that the high mission of eating the hungry has been imposed and thanks to him, the so-called ‘people’, the beggars, have had a plate and a clean shirt to cover their nudity.

“How has Lombera done this miracle? Begging for the rich and favoring the poor, suffering persecutions of justice sometimes, as the police have understood that it was a crime to ask for others.

“At last Lombera triumphed over human selfishness and today is aided by philosophical and religious institutions. However, everything was recently sick and help-free, regretting it, not by itself, but because it could not favor his own. […]

“The Major of the City has now been directed to be granted the right to ask for leftovers and old suits and other items to favor many shameful families.

“… Brown Lombera, badly called ‘The Father of Cats’ because she fed them fish in the Field of Mars, when he is a philanthropist who without ostentation is the ‘father of the wed’.”2

But already on that date the existence of Isidoro Lombera came to an end, full of physical achaques and in his shelter in a very humble room in Old Havana. A victim of prostate hypertrophy, he died at Mercedes Hospital in this capital on March 10, 1917. The cats and the homeless Habaneros were then left without their faithful protector and the capital lost one of its most notorious popular characters, a humble individual turned without brake to goodness and, of course, a demented.

It is noteless that three of Havana’s best-known popular characters of the twentieth century were Spanish, and specifically from three neighboring regions belonging to northern Spain: Galicia, Asturias and Cantabria. The Knight of Paris was Galician, Bigote’e Gato, Asturian and El Padre de los Gatos, Santanderino or mountain or Cantabrian, who are similarly called the naturals of this province. Such a coincidence also demonstrates the significance that Spanish immigration had in Cuban society at that time. Ω