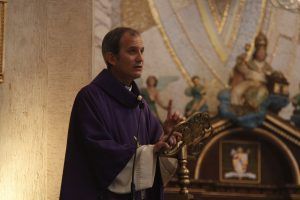 With an emotional “Father, I will miss you!”, Father Yosvani Carvajal Sureda, parish priest of Havana Cathedral, said goodbye to Cardinal Jaime Ortega at the mass of body present held today’s morning in that temple, as part of the funeral honors of the late Archbishop Emeritus of the capital archdiocese.

Carvajal Sureda, whose homily was seconded with a round of applause from the assembled crowd, also recalled another anniversary of his priestly ordination, which he received one day as he did nineteen years ago precisely from Cardinal Ortega.

In his homily, the priest who is also rector of the Father Felix Varela Cultural Center, referred to the importance and power of prayer, as an enabling means of engaging in dialogue with God and recommended that he do so without repeating formulas, from the prayer of the Our Father that Jesus taught his disciples.

According to the priest, “Cardinal Ortega was the one who taught us that the Church should not stay in the sacristy, that religion has a social function”. He further assured that fraternity is one of the social values that makes religion important and highlighted every Christian’s commitment to take it wherever it is.

Father Carvajal thanked all those who collaborated with the cardinal, his relatives and those who have been present at the funerals. At the conclusion of the celebration, he asked for a round of applause for the fruitful life of the prominent Cuban prelation.

Presiding Confessor of Cardinal Mass of the Present Body

Cardinal Jaime was a witness of Christ