Fifty years of priesthood of a great man of faith

Ordained a priest in the diocese of Pinar del Río on December 3, 1970, Father Mario endorsed the motto “My luck is in your hands” (Ps. 15:5) to show us with his life of faith – an example of oblation and dedication – his communion with God and the Church. 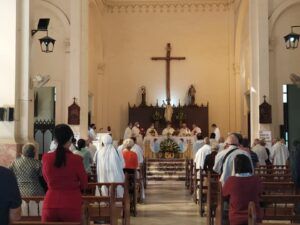 At the altar representing the wheelchair, where Father Mario has remained for almost twenty years as a result of a long illness, he thanked each of the people who have influenced his priestly growth, among which he mentioned his family and The Monsignors Evelio Ramos Díaz, Carlos Manuel de Céspedes García-Menocal and the then Father Froilán Domínguez , rectors of the seminaries El Buen Pastor and San Carlos and San Ambrosio, respectively, where he trained as a seminarian.

He thanked God also for the bishops who in the diocese of Pinar del Río have accompanied him: Msgr. Manuel Rodríguez Rozas, who ordained him, Msgr. Jaime Ortega Alamino, Msgr. José Siro González Bacallao, Msgr. Jorge Serpa and more recently, Msgr. Juan de Dios Hernández, who presided over mass for the Priestly Golden Weddings of this great man of faith.

In his homily, Cardinal Juan de La Caridad García, Archbishop of Havana, begged San Rosendo, patron saint of Pinar del Río, for young people to be inspired by the example of Father Mario, who in the midst of sickness and pain has continued to follow Christ with serenity, abandonment in God and trust in the Holy Mother Mary of Charity.

The ceremony, though simple, brought together some bishops who arrived to accompany the Pinareño priest. Among them were Bishop Emilio Aranguren, President of the Conference of Catholic Bishops of Cuba and Bishop of Holguin, Bishop Jorge Serpa, Bishop Emeritus of Pinar del Río, Manuel Hilario de Céspedes García-Menocal, Bishop of Matanzas and Msgr. Alfredo Petit Vergel, Auxiliary Bishop Emeritus of Havana and Pastor for many years of San Francisco de Paula.

On behalf of Pope Francis, who wanted to join in the joy of Father Mario’s fifty years of priesthood, Msgr. Giampiero Gloder, apostolic nuncio in Cuba, read a message from His Holiness, in which he addressed a congratulations and expressed his gratitude for his ministry in the service of the Church, particularly in the diocese of Pinar del Río. The Pontiff invoked the protection of the Blessed Virgin Mary and imparted the Apostolic Blessing to Father Mario, which he extended to his family and other loved ones. Francis also expressed his appreciation through a medal of his pontificate, which was given to the priest by the vatican representative on the island.

Cardinal Jaime was a witness of Christ