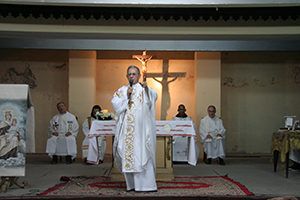 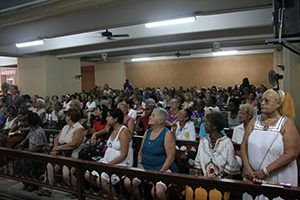 In the central and well-known parish of Nuestra Señora del Carmen was celebrated on July 16th the feast of the titular Marian advocation of this temple.

On this occasion the Carmelite family gathered in the theater, which was adorned and prepared to host the celebration due to the repair work carried out in the church in bad condition for several years.

The Mass was presided over by Archbishop Juan de la Caridad García, Archbishop of Havana, who encouraged the turning of each house and family into that garden that expresses the ancient meaning of the word Carmen. “Let’s take care and work hard to keep our family’s garden always beautiful,” he said. 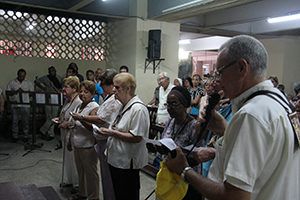 Before consecration, the scapulars were handed over to seven people, who from this moment on make up the seglar order of the Carmelites. This reality requires an authentic Christian commitment: to live according to the teachings of the Gospel, to receive the sacraments and to profess a special devotion to Mary Most Holy. The imposition formula was made by Msgr. John.

Devotion to Our Lady of Mount Carmel is very old in Cuba. There are testimonies of his presence on the island long before there were Carmelite foundations. The Carmelite Mothers founded their convent of Santa Teresa in Havana in the early eighteenth century thanks to Bishop Diego Evelino de Compostela.

The fathers of the Order only arrived at the end of 1879 and settled, in a part of the ruinous convent San Agustin, long before the authorities allowed them to move to that of San Felipe Neri, where they remained until 1927.

That year they opened a new convent and church in Infanta, between Neptune and Concordia. They also made foundations in Matanzas, Camaguey and Sancti Spiritus and have had an important job in spreading devotion to our Lady of Carmen and her scapular, as well as in the spirituality of Saint Teresa of Jesus and St. John of the Cross.

They give the Virgin of Rule distinction of the Peruvian navy

Six years have passed since the CubaEmprende project emerged. From 2012 to date, this initiative of the Archbishopric of Havana that fosters entrepreneurship and supports those who wish to start or improve their own business, […]

Between 12 and 14 October, the 5th local edition of the interreligious meeting “Prayer for Peace” took place. As on other occasions the Community of Sant’Egidio hosted the event in the House of Peace and […]

The work of the Loyola Centers is in line with the teachings of Fr. Arturo Sosa, Superior General of the Society of Jesus […]