These days we commemorate two events of great importance for the promotion of Christian unity. Twenty-five years ago, on 25 May, St John Paul second published his encyclical on ecumenical endeavor “Ut Unum sint”. 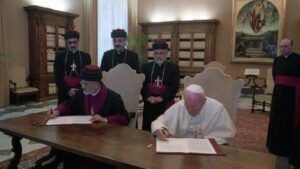 With this document, which was published thirty years after the closing of the Second Vatican Council, it gave renewed impetus to the conciliar decision concerning the Catholic Church’s participation in the Ecumenical Movement, describing it as the “irreversible way of the Catholic Church”.

Sixty years ago, on 5 June 1960, St John XXIII instituted the then Secretariat for the Promotion of Christian Unity, which since 1988 has been called the Pontifical Council.

This Dicastery, on behalf of and on behalf of the Holy Father, conducts ecumenical dialogues with the other Churches and Ecclesial Communities with the aim of restoring the unity of the one wounded Body of Christ, in the course of history, through many divisions. These two commemorative dates show the essential value of the ecumenical task for the Catholic Church.

The week of prayer for Christian unity is celebrated

Celebrate the fifth anniversary of the Father Felix Varela Library