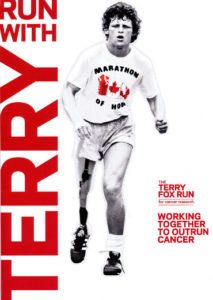 As has happened in the last twenty years, on March 17th the Terry Fox Marathon for Hope was run in Havana, a symbolic three-kilometre tour of several avenues in the city center, with start and finish in front of the Capitol. This scenario, which has been international since 1999, has in Cuba the country with the greatest participation after Canada, because the race is amplified in various locations in the rest of the island.

Let’s remember that Terrance Stanley (Terry) Fox (1958-1981) was a young Canadian passionate about sports practice, who had his leg amputated as a result of an osteosarcoma and in those conditions – with a prosthesis – started a massive enterprise: crossing Canada from Ocean to Ocean (Atlantic to Pacific) at the pace of a daily marathon (42 km) for the purpose of mobilizing awareness and raising funds for cancer research.

Although he failed to reach the final goal, he traveled 5,373 km in 143 days and his long-term goal was far surpassed in all fields. A year after his death, the first Terry Fox race took place in Canada, which, in the first six editions, grossed more than twenty million Canadian dollars. In 1988 the Terry Fox Foundation was established, which assumed the organization of the career and distribution of funds.

But Terry Fox’s legacy goes far beyond the sporting feat. From his example, many things became the perception of cancer by society and among the sick themselves. With his attitude he showed that cancer should not be hidden, that those who suffered it should not be ashamed.

His message was also very strong for the disabled. Paralympic athlete Rick Hansen commented that Fox urged society to focus on abilities without disabilities, and what was seen as a limitation became a great opportunity. Disabled people started to see things differently. They started to feel a lot of pride.

Just a disabled woman, who took the tour in a wheelchair, was the first person we talked to at the last marathon in Havana: Maria de los Angeles Avila. She serves as vice president of the Cuban Association of Physical-Motor Limited (ACLIFIM). He told us: “Participating in this tour is very important for people with disabilities, because it is a career for life, a career for hope, where we are all included.”

In turn, Nieves Adriana Mitjans, coordinator of the national leadership of ACLIFIM, said: “For people with physical-motor disabilities, this represents a point of growth, of hope, but above all of inclusion, and that is something that we seek permanently”.

In the Terry Fox race there is no competition and participants can choose to run, walk or take their tour in a means of transportation. Those rules were set by Fox himself. Marathoners include people of any age and a wide social diversity.
Since marathons began in Cuba, medical professionals have always been present, and especially from the National Institute of Oncology and Radiobiology (INOR), better known as the Cancer Hospital. With several of them we talked, before and after the race.

Dr. Nélido González, head and neck service chief at INOR, told us that “participating in the marathon is a way to promote cancer-fighting actions, and change in lifestyles. Many people in our hospital participate, both doctors and patients who are able to do so.

“This career is very useful for raising awareness of society. At this time, cancer is the second leading cause of death in the country, and in the coming years both incidence and mortality are expected to increase. Cancer was previously thought to be a disease typical of developed countries, but it is already known that it is not, that it is an epidemic for underdeveloped countries, which do not have the necessary infrastructure, nor medicines; a very difficult epidemic to control if we do not take action from the point of view of promoting health education.

“Once the disease is already diagnosed, physical exercise becomes a complement according to the state in which it is found. There are patients who may not be able to exercise intensely, or moderately, but for patients with diseases that are already controlled, exercise can contribute to their rehabilitation. Of course, not indiscriminately, but under professional supervision and guidance.”

For his part, Dr. Elías Gracia, head of INOR’s cancer medicine service, says that “participating in the race is a way to support cancer patients, show them sensitivity and tell them that as a doctor you are also with them. Here come to run patients, cancer survivors, colleagues…”.

And he emphasizes that physical exercise is a way to keep the body healthy, not only as part of the cancer control program, but to achieve a proper state of health.

Finally, dr. María del Carmen Llanta, head of the psycho-oncology and social work section of INOR, also present in the race, we asked for a reflection on the value of hope, from a psychological point of view, for cancer patients, and referred to us:

“Hope is a psychological construction that encourages positive behaviors related to the objectives that are drawn up, with plans and projects; hope has to do with goals and expectations for the future, but it has to have a concrete and achievable content, because if not, it becomes illusion, that far from helping, hinders the coping of the disease and its treatments.
“It is often said that hope is the last thing that is lost; we say that hope is what is not lost even until the end of life, because it sustains and helps.”

Just over forty years ago, in 1977, American writer Susan Sontag wrote a long essay to unmask the metaphors under which some diseases were hidden, including cancer. It was precisely that year that Terry Fox had his leg amputated and two years later he began his career towards immortality. With his attitude, with his influence, cancer was losing that layer of mystery and prejudice that surrounded him. Hopefully, in the not-too-distant future, it will also cease to be an enigma for science. When that happens, there will be the spirit of Terry Fox. Meanwhile, his career never ceases. Ω

Learning to grow by giving away love

Reason for hope for the Cuban Church

Rething our identity and belonging

Introduction Artists, poets and philosophers observe reality and try to understand it, ordain it, adorn it and name it in their own language. The different sciences and arts approach reality with a specialized look. Ordinary […]

JOSÉ MARTÍ INTERNATIONAL AIRPORT, HAVANA, SEPTEMBER 19, 2015 Mr President, Distinguished authorities, brothers in the Episcopate, Ladies and gentlemen: Thank you very much, Mr President, for your welcome and your warm words of welcome on […]

This September 7th the bay of Havana was again close to the devotees of Our Lady of Rule, who from early in the morning approached the National Shrine to pray the Rosary of the Aurora. […]