PRAYER FOR EVERY DAY

Saint Mary of Charity, Mother of the Lord
Jesus, we venerate you with special affection and
Love.
We praise you, Mother and Patron of the people
Cuban, because you’ve been present at
all the struggles, sorrows and joys of your
People.
Virgin Mambisa, proclaimed and revered
by our veterans, we ask you to
today, as yesterday, be present in life
of your beloved people: this town you are looking for
love, understanding and sincere union
of all Cubans.
We offer you; the efforts of our
Christians, the work of our workers and
peasants, the study of our young people,
the smile of our children, the pain of
our sick, the watchful and
quiet of all our mothers, the
loneliness of so many brothers, widows and
orphans the generous delivery of our
martyrs and the deceased, the noble and
simple from our village
Mother of Charity, reach your altar
Copper, so beloved and revered, the
pleas we present to you.
Amen

Maria, in our struggles for independence

The Virgin Mary is not only aware that she belongs to a people chosen by God, to walk with God on the paths of history, from a history that is a way of salvation. St Augustine expresses it by saying “You made us for yourself and our hearts will walk restless until it rests in you.” Therefore the acceptance of Our Lady, who, by the mercy of God, precedes the Incarnation (Cf. LG. 56), is of great importance in the history of salvation: because the incarnation of the Word is the salvation of man.

In this way the Blessed Virgin Mary presents heses heses hemselves as a collaborator of God in the project of universal salvation, something that centuries later the Holy Bishop Augustine of Hippo comes to manifest by saying: “The God who created you without you, will not save you without you”. God asks for the collaboration of man to develop his project of full life in humanity.

The consent of Our Lady, who, according to the blessing of God, preceded the incarnation (cf. LG 56), has great importance in the history of salvation, since the incarnation of the Word is the restoration of man.

In this commitment to formation, freedom and independence of the Cuban nation, the Mother of God, who had long been found on our shores and settled in the town of Cobre, encourages her children to freedom based on charity, in love, was not absent. And on March 19, 1801, the people summoned to the hermitage-sanctuary, with the nerve in the word read The Chaplain Ascanio, before the Mother who went out to the door to celebrate with her children, the Royal Cédula by which the lands they worked and the conquered freedom were returned to the coppers. Thus, it was the slaves of El Cobre who were granted freedom in Cuba: she, our Lady, was thanked for the triumph achieved after more than a century of constant struggle.

Copper was a beacon of freedom for the island, the Mother gave strength to hope and verve to the spirit, to the warmth of her love, the identity of this people who saw the devotion to our Lady of Charity grow, along with its roots.

As in the previous scenarios, at the start of the War of Independence, our Lady of Charity climbed with the Cubans to the mountains encouraging their hearts, and which tricolor cockade went her “measure” surrounding the elo hat. To her they were entrusted in combat, for her there were candles lit on the altar of campaign, although food was scarce, she had consecrated their struggle sure that she would give them victory: her love was her strength.

After the war, which, with great courage, the mambises won, on July 17, 1898, the heads of the foreign armies, ignoring them, signed the Act of Capitation under the once leafy ceiba that the Americans called “Tree of Surrender”, and we, more generously, “Tree of Peace”. Major General Calixto García, the great strata that made victory possible, was not allowed to enter the desolate city of Santiago de Cuba with his troops.

The virile and Creole response of the Head of the Eastern Army is not surprising, was that of a man of Cuban identity and inculturated faith: order his General Staff – under General Agustín Cebreco – to “celebrate Cuba’s triumph over Spain in solemn Mass with Te Deum at the foot of the image of our Lady of Charity”. And on September 8, 1898, “the first religious festival in Cuba Libre y Independiente” was held at the old Shrine.

And to be recorded in the annals of history, they signed that morning the Act raised next to the revered image of the officers of the Cuban Liberator Army, and also those of the American army present at the celebration. This Act, which is preserved in the archives of the Shrine as a precious relic, is considered to be the Mambisa Declaration of Independence, and is an expression of the Cuban Catholic’s commitment to the Church of his land and to his land. 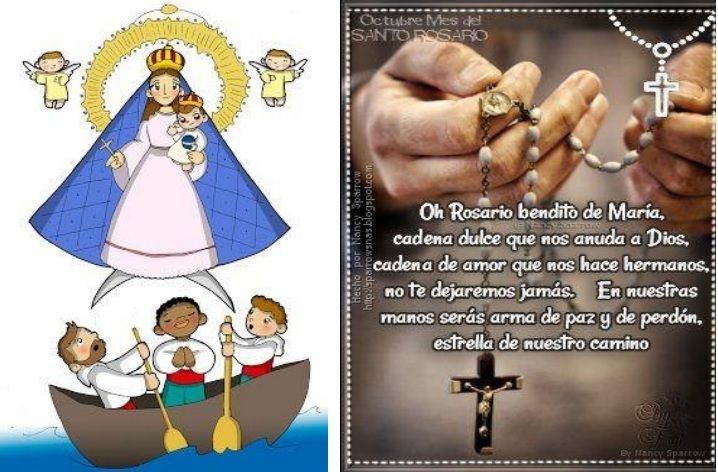 Right now think about
silence that
grace you want to ask God
through the intercession of Our Lady of the
Charity during this
ninth (Brief silence).
We offer this
dozen of the rosary for all
us who have
accompanied to Our Lady,
asking for the evangelization of
our people, so that in
every home Cubans open
wide the doors to Christ
and our society won’t be afraid to leave
that the values of the Kingdom are
keep in mind.

Virgin of Copper Charity “You have come to visit our people and wanted to stay with us as Mother and Lady of Cuba, along her pilgrimage along the paths of history”.

– “Your name and image are sculpted in the minds and hearts of all Cubans, inside and outside the Fatherland, as a sign of hope and a center of fraternal communion”.

– “Mother of Reconciliation! Gather your people scattered around the world. Make the Cuban nation a home of brothers and sisters, so that this people may open their minds, hearts and lives wide to Christ, the one Savior and Redeemer”.

What do I commit to living on this day?
I think of something concrete I can do to manifest love and faith in the Lord.

The Lord Almighty, bless us, keep us from all evil and lead us to eternal life. Amen.

Sixth day of the Ninth to the Virgin

Fourth day of the Ninth to the Virgin

Ninth day of ninth to Virgin

Second day of the Ninth to the Virgin